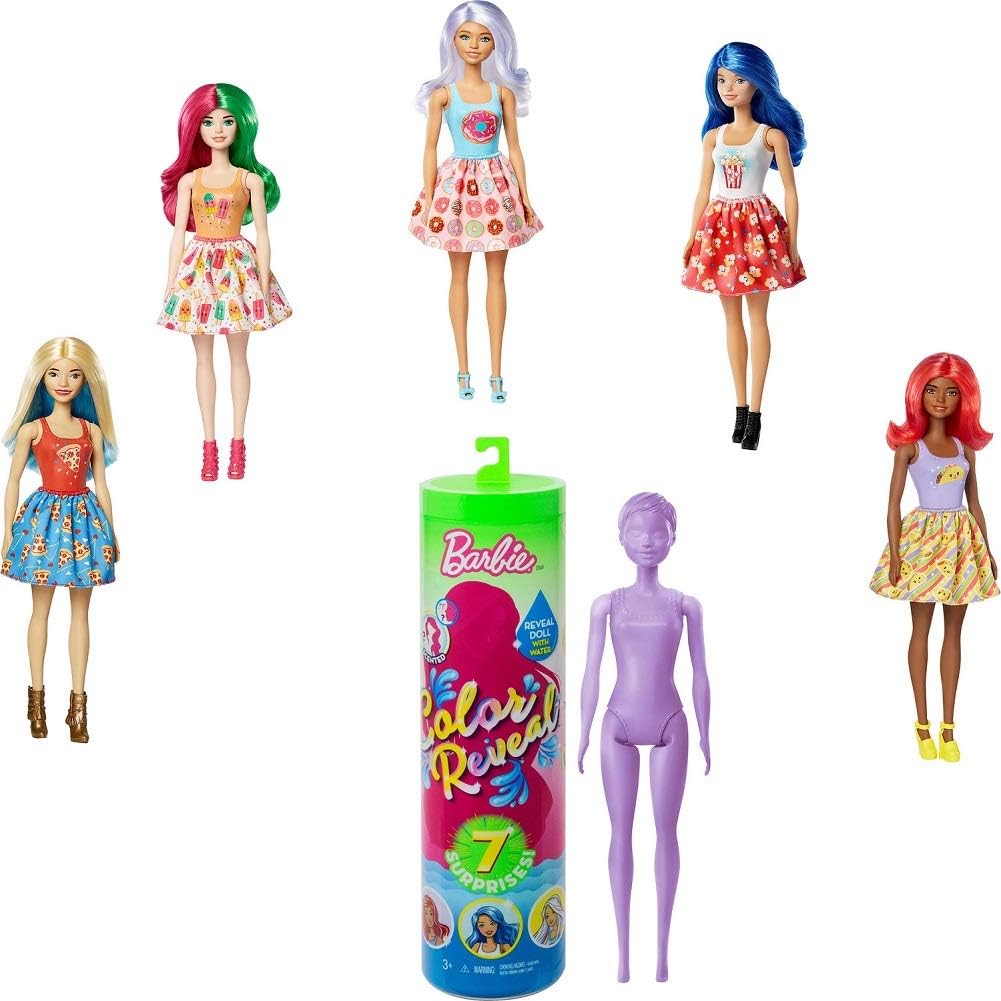 Add to whishlist
Share:
Cost Break Down
About this item This fits your . Make sure this fits by entering your model number. P.when("ReplacementPartsBulletLoader").execute(function(module){ module.initializeDPX(); }) With 7 surprises in one package, the Barbie Color Reveal dolls deliver all kinds of delight! Start the experience by removing the outer layer of packaging, unscrewing the top of the tube and pulling out a doll covered from head to toe in Color Reveal purple and 4 decorated bags that keep the contents hidden! Fill the tube with warm water, place the doll inside and swirl her around -the water clouds up with purple for a magical effect! Pull out the doll to reveal her look -each doll has a different combination of eye color, color of her sculpted hair, skin tone and decorated leotard. Open the 4 mystery bags to reveal their surprises -a scented wig that matches the doll's food theme, skirt, pair of shoes and small sponge; store them in the tube after play! Dip the sponge in ice cold water and use for a facial and sculpted hair transformation that can be repeated over and over again – her eyes and lips change color along with her hair streaks! Dress and accessorize the doll to play out stories -transform her look for a wow moment! This surprise Barbie Color Reveal doll is part of the food-themed series and makes a great gift for kids 3 to 7 years old, especially young foodies. Kids can collect them to mix and match accessories and expand the playtime opportunities because when a girl plays with Barbie, she imagines everything she can become! Show more
Product Dimensions
1.5 x 3.5 x 12 inches
Item Weight
4.1 ounces
ASIN
B083XRZC4Q
Item model number
GTP41
Manufacturer recommended age
36 months - 8 years
Release date
March 1, 2020
Mfg Recommended age
36 months - 8 years
Manufacturer
Mattel

Review:I got this for a reward for my daughter. She and I were so excited to do this. We used warm water, as instructed. This is the most that we could rub off the color! When we tried to rub harder, the paint of her clothing began chipping off! It was absolutely nothing like the videos. Instead of the color swirling off in the water, the color was falling off in the water. Ridiculous! And the wig... is just weird. You can see the plastic hairline to it. My daughter went from super excited to totally not impressed. Very disappointed. Update with new pic: upon notifying the seller, they immediately sent out the replacement, which I absolutely loved! The replacement got out to us before I sent the faulty toy back and worked wonderfully! The water swirled with metallic blue liquid and the doll came out great, just like the advertising! Read more

Date:Reviewed in the United States on September 29, 2020

Review:My kids (9, 7, 5, 3 yrs old) begged me for one of these and I eventually relented. They'd seen it on some YouTube thing. Admittedly, I didn't pay much attention to the video or exactly how this thing was "revealed". When it arrived I was in the throes of making dinner, so I sent them off to the bathroom for the big "reveal" with instructions to be careful not to make a huge mess. Big mistake! Hahaha!! Let's just say, they filled the canister with water, which turned blue as the Barbie was revealed... then the canister conveniently slipped out of my 9 yr olds hands and exploded all over the bathroom. Blue water all over the walls, sink, toilet, rug, floor... you get the idea. I had a few choice words under my breath and had to halt dinner prep to clean up the disaster. The moral of the story... this is probably a toy best done under adult supervision... or outside where blue water explosions aren't a hassle to clean up. Haha! My kids love the Barbie though! Read more

Review:We ended up getting the taco doll and it smells like crap even after washing the wig twice. I’ve never smelled something so awful in my life. I can’t believe they actually put a doll out like that. Read more

Date:Reviewed in the United States on October 16, 2020

Review:As a massive mermaid and Barbie fan, these were an absolute perfect treat for me but, the results were a little lackluster. I am familiar with the former Color Reveal lines and had whole heartedly not been impressed but once I saw that the terrible wigs were gone and these were mermaid, I had to buy two. While the total surprise element is gone as soon as you open the blue bag inside of the tube, these dolls have better articulation than the former Color Reveals and seem just better made than those. Once their absolutely stunning tails are revealed, these may be some of my very favorite mermaid Barbies. Their tails are reminiscent of the 90s mermaid Barbies in that their snap on tails are made of a thin, gossamer like material and really give these dolls a vintage and ethereal aesthetic. However, the hair is absolutely terrible. Some of the absolute worst hair I have ever seen Barbie have. Thin, sparsely placed and large bald spots are not a good look. While I understand that this supposed to be color changing, the hair could have been done better but at least it’s not the wigs. Second, the tails are absolutely stunning and have a crystalline effect to them but, that effect is only on the front of the doll and they have very plain, standard backs. At fifteen dollars a piece, for a surprise toy, I expected better. These dolls are beautiful and definitely playline toys. Even with their complications, I would definitely recommend them to fellow collectors! Read more

Review:I love the concept of this doll. I’m in my 30s, I don’t play with barbies but I saw this on tiktok and I thought they were so cool. Surprisingly, I got the two that I really like the most. The donut girl and the taco girl, but the taco girl’s hair stinks. It’s smells like taco seasoning. Read more

Review:The color change hair on one was already changed. It wouldn’t go back. Plus these are very stiff and hard compared to regular Barbies. The girls like the surprise aspect. But pretty pricey for the quality. Read more

Review:I’ve purchased this type of reveal doll at a local store and my daughter LOVED it! So for her birthday I purchased this as well as a 6inch. Unfortunately none of the “magic” of this doll worked. The “tattoo” didn’t show up and the hair didn’t change color with temp water. We were so disappointed. Read more

Date:Reviewed in the United States on November 27, 2020

Review:I love these so much! I am a grown woman, who used to play with barbies as a little girl. When I saw these mermaid color reveal dolls, my inner child couldn’t wait to buy one. I definitely felt like a kid again, not knowing which mermaid I would get and secretly hoping I got one of my favorites. I was so happy when I did get one of my faves (the blue mermaid). I subtracted one star, because the fin part of the tail looks really cheap and almost like it’s about to tear. Other than that, I love these and I want to buy more! *Updated* I really wanted to do another one, and was secretly hoping I would get my favorite one (the green and purple mermaid). I bought one more to try out. I literally gasped when I opened the package and got her. She looks so beautiful, and her half-shaven head is really cool! I might just keep going until I have them all! Read more

Date:Reviewed in the United Kingdom on November 2, 2020

Review:You know when your child excitedly chooses their special present because they completed their marble jar and you tell them that they will receive it on Friday, but it doesn't arrive until a few days later? Well, that! Amazon did keep me informed of the delay, but this didn't help with the 6-year-old reasoning. Luckily all was forgotten once the doll actually arrived. It''s great and exciting, but a few points to note: * you have to use very hot water for the colour to actually all disappear- I ended up wiping the leftover colour with a kitchen towel * you need to use freezing cold water for the makeup and hair change- I give her an ice cube to use * the wig is the one that changes the hair colour- not the pixie hair that barbie comes with * doll is made from a different material as "normal" barbies- it seems more plasticky and less rubbery * hair sits high up, doesn't fall as naturally as in other Barbies - it makes sense as it's attached to something that can only be described as a transparent helmet. All in all a child is happy, but I'm now worried I'll have to buy all the other ones :) - we'll probably go with a Chelsea doll next. Read more

Review:My 6yr old daughter asked for one of these for easter. Upon arriving it was well packaged & she was very excited. The paint came off in the water easily & she was very excited to discover the popcorn doll with blue hair! The exact doll that she was hoping for! £20 for a 'surprise' doll is quite a lot but as with most barbies it seems pretty well made. And I have a happy 6yr old so it's a win from me! Read more

Date:Reviewed in the United Kingdom on February 25, 2021

Review:Nice doll, but that's about it. The idea is to put in its packaging tube full of water and the paint dissolves revealing the tail design. We did it in the bath, probably not the best place as the bath water turned green. Doll reacts to hot and cold to reveal other details on face and hair. It also appears that once the tail fin is in place it can't be removed. Not much wow factor on the designs that are revealed. Not sure I would get another. Read more