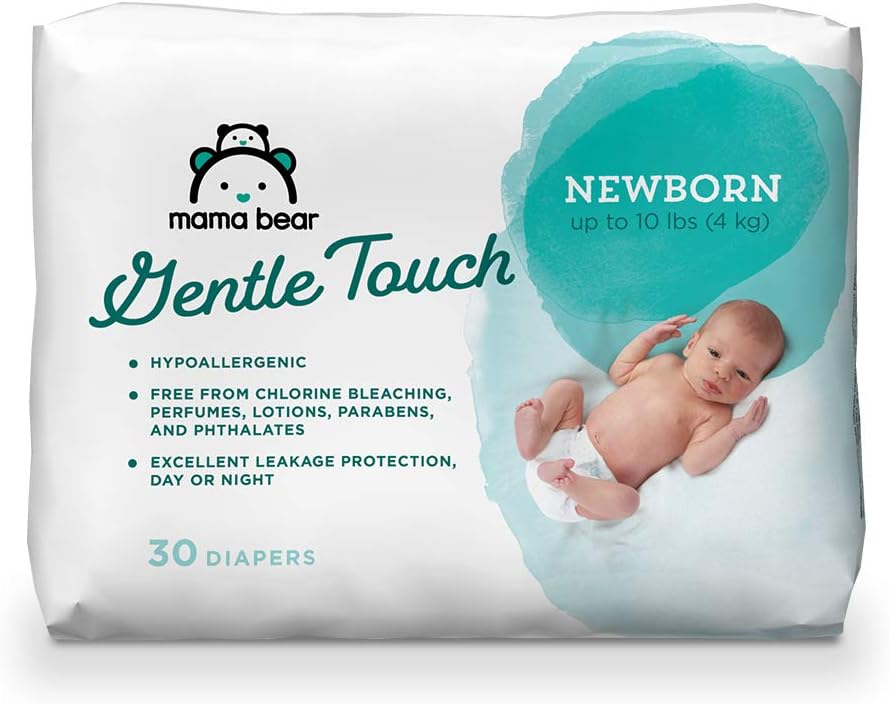 Review:This is a comparison review on these vs the original Mama Bear Diapers. The Gentle Touch are longer and narrower, more comparable to Pampers in size, as where the Original is more comparable to Huggies in size. The Gentle Touch are noticeably thinner and cheaper/flimsy feeling, though still soft. The waist band on the Gentle Touch is also thinner and narrower, as are the leg gussets. And while these do have the pee indicater, the dye used is of lesser quality and turns the whole diaper area blue, rather than just the strip. I'd say the Gentle Touch are most similar to Target's Up & Up brand, as where I'd compare the Original Mama Bear to Honest Brand. I had much higher hopes for these, as with them being "gentler" and more sustainable, but unfortunately the quality just isn't there. All this being said, I have had no leaks and no rashes, so all in all they do what they're meant to, though I'll be sticking to the Original Mama Bear diapers, especially as the Originals are just $7 more. Read more

Date:Reviewed in the United States on October 11, 2019

Review:I was initially very excited about Amazon offering a diaper with better ingredients, I had always hesitated to buy Mama Bear brand for that reason. I was honestly disappointed. They are soft, which is great and very thin. They remind me a lot of Up&Up brand by Target, which is about 1/3 less expensive than these. They have the same plasticity feel on the outside and clump up and hang really low when wet like the Up&Up brand does. Up&Up is also Elemental Chlorine free, lotion/frangrance free and all that good stuff. So the quality is no different. While the availability of 1 day shipping is excellent when you’re busy, I think after I’m through with this box I won’t reorder. I’ll stick with my favorites... Honest and Cloud Island diapers. Slightly more expensive, but excellent ingredients and functionality. Read more

Date:Reviewed in the United States on November 27, 2019

Review:I’ve been using Pampers Swaddlers exclusively for three years. I wanted to send diapers ahead of time to my parents house for thanksgiving so I wouldn’t have to pack them, and Mama Bear was the only brand that had a small enough pack that didn’t require Amazon Fresh to be delivered. So I’m trying these out this week and I am floored by how great they are. Let me start by saying my first Mama Bear purchase were the diaper pail refills for my diaper genie. Those are the most affordable refills and they’re just as good as the brand name refill because they *are* exactly the same. I know this because the box it ships in literally says “Playtex” on them. So I was wondering if it would be a similar situation with the diapers and I think there’s a good chance they are in fact made by Pampers. They’re feel the same... equally soft, absorbent, and comfortable on my son as Pampers Swaddlers, they even have the yellow line that turns blue. The only difference is they’re plain white with a Mama Bear logo on the waistband. They have the same message on the package about the absorbent material as Pampers, word for word. The fasteners are a little different but I legit think they’re Pampers, which I wish I had known sooner because I could have saved so much money on diapers over the years. I guess next I’ll have to try Mama Bear wipes! Read more

Review:My photo shows these diapers in the middle of two other brands we use. I like these diapers because they are thin and soft and fairly comparable to swaddlers. The only thing I don’t like is that they seem to sag very easily, which could be a sizing issue (these seem to run a touch larger than our other size 5s) or could be the diaper itself (maybe not as stretchy as they could be?). I prefer the original mama bear diapers over every other diaper we have tried, and after trying these, the original mama bear diapers remain the favorite. On the positive, I have a little one with severe eczema and sensitive skin, and his skin issues around the diaper area seemed to clear up while using these. There was no increase in diaper rash with these either. Read more

Date:Reviewed in the United States on October 7, 2019

Review:I had used Member's Mark diapers with my 2 year old since she was two months old. I loved them until she got close to 2 and started being a more heavy wetter and they were no longer absorbent enough. I've been trying different kinds trying to find a new brand that we love and I came across these. I was excited because they are a great price and seem to be a clean option. I was disappointed when I opened the box to find they are exactly the same as Member's Mark diapers just with a different print. They even smelled the same. I took side by side photos to show the similarities. The diaper on the left is Member's Mark (size 4) and the one on the right is Mama Bear (size 5). If you have a younger baby or a baby that is not a heavy wetter these will be great, but I don't think I will repurchase them for my 2 year old. I will likely start buying them for my six month old though. Read more

Date:Reviewed in the United States on October 4, 2019

Review:The diapers aren’t as thick as a buggies Brand, but any diaper that can hold up overnight on my son that pee so much I deem it an awesome diaper. Even with a fully loaded per diaper in the morning, i haven’t witnessed any gel from the diaper which is excellent! Read more

Date:Reviewed in the United States on October 15, 2019

Review:I've purchased Mama Bears in the past and while the quality wasn't as good as more top name brands, I was still pleased with my purchase. Just this past week I purchased these again because we ran out and our subscribe and save order was still too far out for our regular diapers. I am pretty disappointed. The quality is quite poor. They don't hold up well on an active little one, we've had multiple different diapers leak both from the top and the leg holes, and they feel quite cheap as well. I unfortunately don't recommend these and won't be buying these again. I gave two stars was because I think you get what you pay for here. Read more

Date:Reviewed in the United States on October 11, 2019

Review:I’ve been buying and loving the original Mama Bear diapers, and thought I’d try these since they were less expensive. They are slightly thinner the originals- they remind me of the Up and Up diapers from Target. They're still pretty soft, and after a week of use we haven't had any leaks. If the price stays low, I'll probably keep buying them. Read more