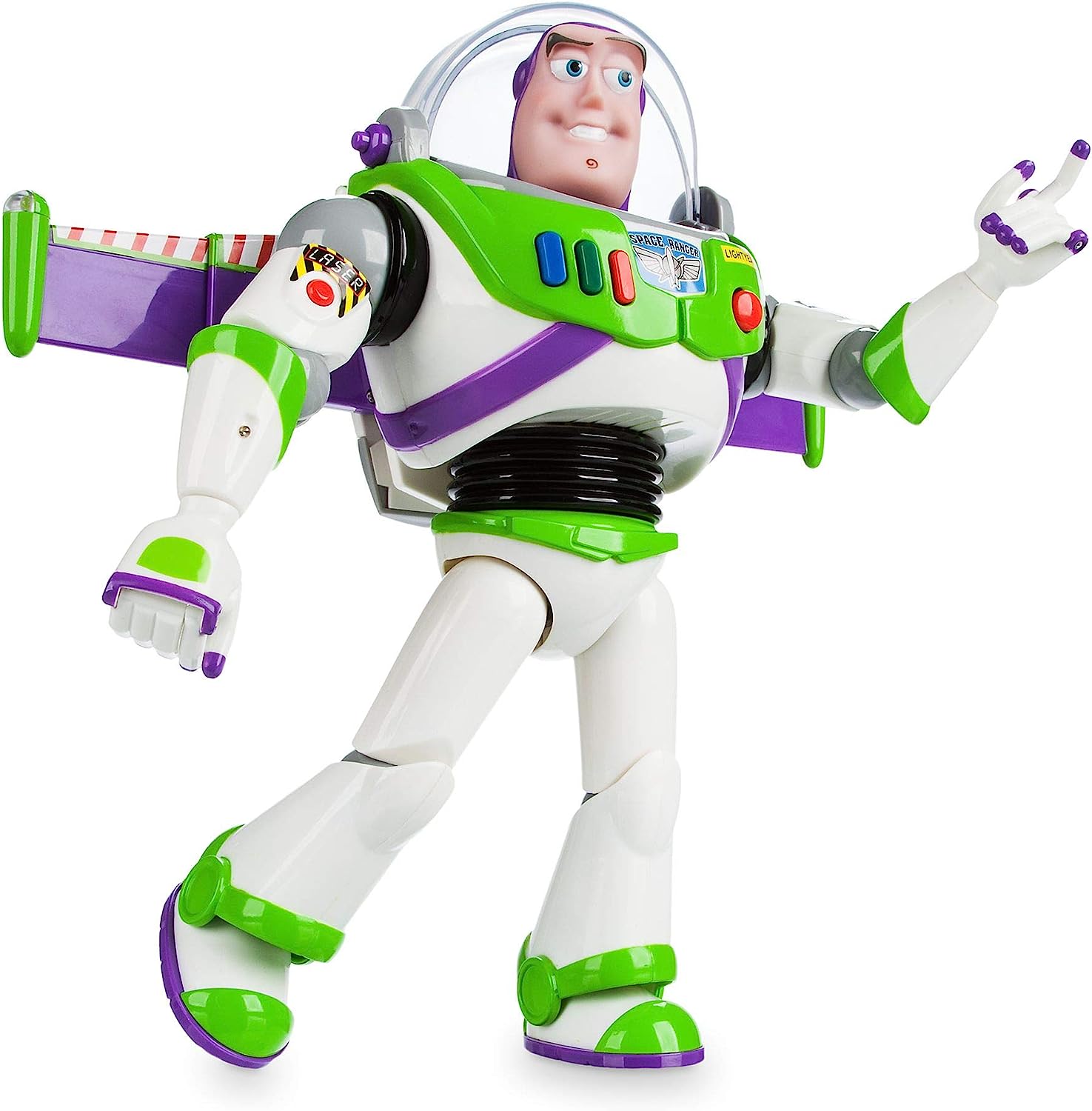 Review:I bought this for my nephew for his birthday. I wanted him to have a cooler version of Buzz than I had as a child. After much research and a little planning I found this. I mean this comes with karate chop action, people! Com'on! That alone is all the reason to buy this for your loved one. It also has the laser on his right arm. It comes with a Star Command flap you can open on his left arm. There's a button you can push on the helmet that makes it snap open. The wings open up. Plus theres many more phrases he says than the one I remember as a child. Also, the box said something about toy recognition. I guess if you get the Woody Doll that goes with this specific Buzz, they can tell if each other are in the room. I don't know how that works but it sounds fancy. Hell, I was tempted to buy one for myself, haha. Needless to say he loved it and I hear it's one of his favorite toys at the moment. So, that's good enough for me. Hope this helps! Read more

Review:Your browser does not support HTML5 video. I like how this product does everything that buzz dose in the movie but when I got it one of the lights on the wing didn’t turn on and the helmet didn’t close all the way Read more

Date:Reviewed in the United States on October 9, 2019

Review:This toy is absolute junk. My three year old had the first one for less than 3 hours before the arm literally snapped. The inside plastic just snapped with him just moving it around and playing with it. We sent it back and wait for the exchange and got the second one yesterday. We set a whole thing where Buzz was back and he is home for good thinking he might have gotten a defective one. He played with it from 6 to 9 and he went to bed without it. He woke and started to play with it again for an hour and now his wings won't pop out. He was very nervous to use the wings to begin with because he didn't want to break it again so I know he wasn't rough on it. THIS TOY IS FOR A 3 YEAR OLD AND DIDN'T LAST MORE THAN 6 HOURS EITHER TIME WE BOUGHT IT. The first one might have been him being a little rough but again - nothing more than what a toy for a 3+ should handle - but the wings? SUCH JUNK! Also - both toys came scuffed and had paint on them. I didn't care because the price was good and it was for a 3 year old. The box that came didn't even have a UPC label on it and isn't sold in store so I think this was a China knockoff. Read more

Date:Reviewed in the United States on October 9, 2019

Review:Yeah. He's pretty cool. I have a very happy daughter right now. I ordered a different one from Kohls and when it arrived my daughter was very disappointed. Then we ordered this one. All of the buttons actually work (not decorative like the last one) the helmet opens and closes and his wings pop open and flash. One thing I have to say that sounds trivial is he actually stands up without falling over. This sounds silly to add in a review but I can't tell you how many of her dolls/action figures/ toys that do not and that makes her crazy. Read more

Date:Reviewed in the United States on October 14, 2019

Review:My son was so excited to get buzz for his birthday last week. He takes buzz everywhere. However, today he approached me with buzz asking for help. Buzz quit making noise. His lights still work so I don't think it's the batteries, but my poor baby is heartbroken. He never throws buzz around, so it's not user error. He's always very careful with him. I desperately wanted to give Buzz a 5 star review, but my baby's broken heart makes me unable to. Read more

Review:This the same exact Buzz we originally had that broke with minimal play, only difference being that "Bonnie" is written on the foot as opposed to "Andy". With so many design flaws with the original Buzz, I was hopeful that those flaws would have been corrected in the newer edition. Unfortunately, this was not the case. The stickers on the wings that began to tear when his wings open and close, are still present and the body is still constructed of the same materials. I couldn't stand the thought of a new Buzz losing another foot or arm (which due to the plastic, are not repairable by the way). I didn't even take him out of the box, had to return. Read more

Date:Reviewed in the United States on September 22, 2019

Review:Look, i understand, not all kids are the same. However, this toy broke after the first day. I'm not sure if it's my kids broke it, or if it was just cheap quality. Buzz's wings should fold close and they no longer close. The button on the front is jammed and his wings no longer close. Very disappointed. My kids are not happy that Buzz no longer works. Toys are just not made the way they used to be. Toys are so easy broken today. Read more

Date:Reviewed in the United Kingdom on January 3, 2021

Review:Your browser does not support HTML5 video. Does everything Buzz should do. Arm laser, forearm flap, karate chop, pop out wings with lights, phrases, helmet which opens and closes, Bonnie marked on sole. Movable arms and joints. Sensors in belly so it works with some other figures (we have the little alien which it works with shown in video) Read more

Date:Reviewed in the United Kingdom on November 15, 2020

Review:My little girl had been asking me for buzz for ages to go with her woody and jessie. So as a treat I got it for her first week of school. I've got prime so it came next day. Comes in the box buzz does in the movie which I thought was really cool. Well made and does karate chop ,laser arm, helmet pops up and the wings pop out his back and light up. Easy to use and wasn't to hard to get out the box Read more

Date:Reviewed in the United Kingdom on November 30, 2020

Review:Ive been worried over ordering this from online as you dont see the actual size! However when it arrived i was very impressed comes in the box like the film and his wing expand! my son loves it Read more

Date:Reviewed in the United Kingdom on February 22, 2021

Review:my son loved buzz until a few days later and his arm broke and does not do karate chop anymore and the arm is stuck in the air will not stay down. Paints coming off already stickers coming off . Bad for the money you pay . Karate chop button doesnt work Read more

Date:Reviewed in the United Kingdom on March 9, 2021

Review:My 2 and a half year old daughter loves her Buzz Lightyear toy! She takes him everywhere with her! Some of the paint has come off his hands but that is due to her bashing him around quite a bit! Very durable and good size. Says all the phrases you expect (‘to infinity and beyond’ etc.) Only downside is that you need to press down quite hard on the button to get Buzz’s wings to pop up but this doesn’t bother my daughter at all! Highly recommend for any toy story fans! Was worth paying a bit more to guarantee things like wings, helmet and well-known phrases. Read more