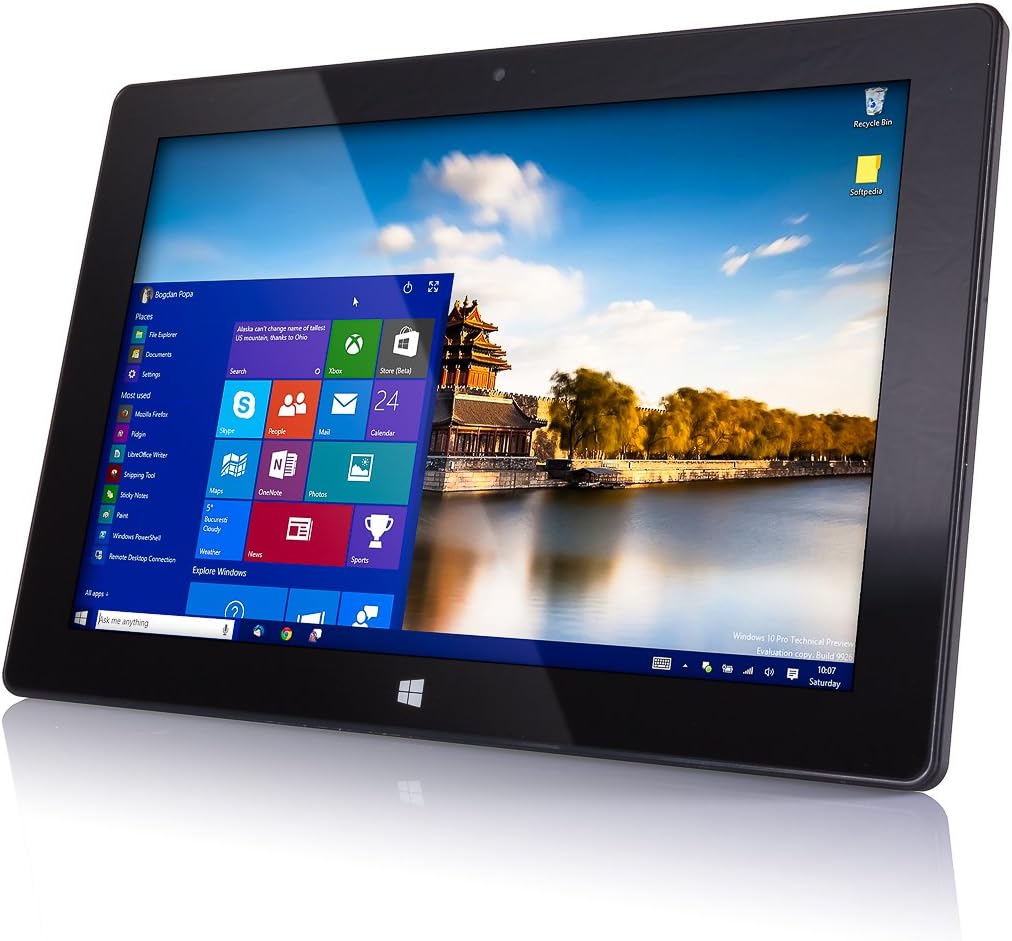 Date:Reviewed in the United States on October 11, 2018

Date:Reviewed in the United States on December 15, 2018

Date:Reviewed in the United Kingdom on October 17, 2018

Review:I bought this tablet to replace my 5 year old Asus VivoTab, which I use whilst travelling. The old machine could not support the latest version of Windows 10 and was noticeable slow attempting to support Office 365 desktop applications. This brilliant bit of kit, is not only 64bit but also includes the very latest build of Windows (1803), so includes "Files-on-Demand", which gives me access to over 1Tb of files via my Office 365 account. All the applications run smoothly and super fast. The tablet's build looks very professional, with a nice texture on the back, which helps you grip the device. If like me, you use the Microsoft Teams app, you will need a keyboard, as the on-screen keyboard hides the chat entry field. Having checked with the seller, I now have the matching Fusion5 case with keyboard, which I am pleased to say has a UK layout and build-in tracker pad. A slight down side, is the lack of instructions, although as an IT professional of over 40 years, I have quick become accustom to the enhanced functionally of the tracker pad. The tablet does get quite warm whilst charging and when performing CPU intensive processes, but still OK to handle. This may have a negative impact on the battery life, which is currently exceptional... over 10 hours of average use between charges. Only time will tell, if the battery can't deal with the heat. If you need a small portable Windows laptop or tablet, then you sure certainly consider this device, as its performance vs cost is outstanding. Read more

Date:Reviewed in the United Kingdom on December 7, 2018

Review:I bought this to replace an aging Samsung NC10 Netbook, for use both in tablet mode and with a keyboard. In fact the screen on the Fusion5 10” is the same size, but it’s much slimmer and lighter. I was keen to find a device with a minimum 4GB / 64GB to run Windows 10 effectively, and I added a 128GB Sandisk Ultra microSDXC card to get maximum storage – moving the standard documents, music, pictures and video folders onto it to leave maximum space on the main C:\ drive. Other reviews have commented on the excellent specifications, so I’ll just comment on my own usage in desktop and tablet mode. For desktop use the compatible docking case with keyboard has a magnetic coupling and a clever supporting stand, and adding a Bluetooth mouse is useful for any serious work. The magnetic coupling isn’t strong enough for the tablet-keyboard combination to be carried around open or used when sitting on a sofa, but this is when tablet mode is most appropriate. The tablet is nicely finished but really needs some protection when used without the keyboard case, so after careful consideration of dimensions I bought a Leather Case for Sony Xperia Z 10.1" Tablet which fits almost perfectly (just slightly over-sized in width) and has a hand strap and viewing stand (see photo) - https://www.amazon.co.uk/gp/product/B00E9WRNBO/ref=oh_aui_detailpage_o02_s00?ie=UTF8&psc=1 – the power and up-down buttons are obscured, but still usable when pressed through the fabric. I already had a separate Bluetooth keyboard, and find it handy to use this instead of the keyboard case, though the latter is more responsive when typing quickly. The tablet suddenly went dead after a couple of weeks but Fusion5 quickly supplied a replacement, so it’s reassuring that their UK-based customer service is very responsive. The replacement came with a completely up-to-date Windows 10 installation. Overall I’m very pleased with my purchase, especially at the price, and like the flexibility of having the additional XperiaZ case and separate keyboard as well as the compatible Fusion5 keyboard case. Read more

Date:Reviewed in the United Kingdom on October 30, 2018

Review:Well I wasn't expecting quite so much from this little device but I am pleasantly surprised. It's a Windows 10 PC and unlike other tablets has SD, HDMI, full size USB, mini USB (with an adapter to full size) as well as Bluetooth and WiFi. The supplied power adapter is small enough to carry with you and the pad will charge from USB but much slower. Although I haven't timed the battery life it seems more than enough for general use. Being Windows there's a lot of software out there and running Libre office is easy. Build quality is better than expected as is the screen and its responsiveness is as good as any. A bonus - it comes with a screen protector pre installed! The Atom processor and graphics are fine (don't expect to run Titanfall, but this is cheaper than most graphics cards cost!) and HD videos don't make it break a sweat! I am more pleased with my purchase than I would have imagined. So far so good. Have seen some reviews for the 2/32 version saying they can't upgrade Windows - run disk clean to clear the old Windows upgrade cache as it clears a lot of junk. Read more

Date:Reviewed in the United Kingdom on October 17, 2018

Review:My 15-year old Dell PC tower finally gave up the ghost a few days ago and, with it running XP, was long overdue for replacement. I have an iPad, but it doesn't have a USB port, which I need to transfer to and from my phone and playback from memory sticks in the car and home stereos. I found Tablets with full-size USB ports pretty rare until I stumbled across the Fusion5 windows 10 10" tablet on Amazon. The low price point of £154 at first suggested that it couldn't be up to much, but I was pleasantly surprised when itarrived just 2 days later. It seems to be of quality construction, with 12 months guarantee (plus additional 90 days if registered within 14 days) and the screen is clearer than the 'retina' display on my iPad ! Very pleased with my purchase and upgrade to the latest Windows 10 OS, so much so that I will be using it for more than just transfers to memory sticks - to this end, I have already downloaded Libre Office (the free alternative to Microsoft) and Money Sunset Deluxe financial apps. A separate keyboard would be of great benefit, though and is next on my list - the compact screen is a boon but also hinders typing. Overall very pleased - and the online chat support from Fusion5 is also very good ! Read more

Date:Reviewed in the United Kingdom on December 25, 2018

Review:For its price, this isn't a bad tablet, however, there are a number of big flaws in its design. Firstly, the sound is dreadful, even with it on full, you can just about watch Netflix lying next to it in bed in a quiet room (my budget Asus tablet outperforms this by a long way, as will any decent smartphone). Second issue is the finish, I might have got a bad one but there were a number of small bubbles under the screen (outside of the display area luckily) and with a plastic finish, it doesn't feel strong. It also has dreadful WiFi, sitting next to the router, I can pick up around 30mb/s, whereas my Pixel 2 connected to the same WiFi network gets more than double this speed. Final bugbear is the Port layout, full size USB is brilliant but it's at the top of the tablet, meaning that, using it in laptop configuration, you have a load of cables hanging out of the top of it, the ports are also really close together meaning that I actually hand to file down the HDMI to mini-HDMI adapter to actually get it to fit alongside a USB cable if using both at the same time. These points aside, for Netflix, Word, Excel, Chrome, PowerPoint and general tasks generally better suited to Windows over IoS on Android, this is a bargain price and I can see me using it a lot despite some disappointing issues. Read more