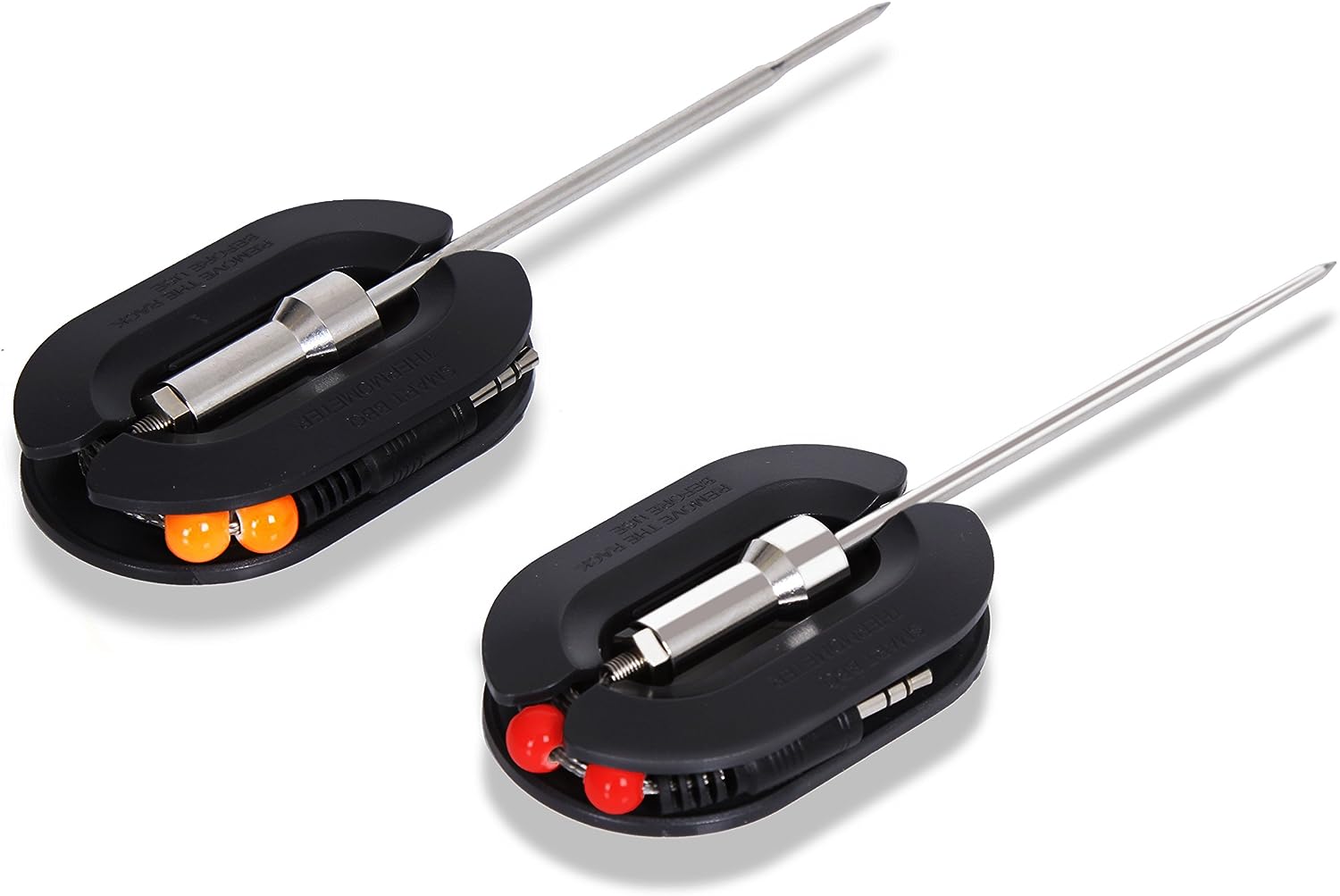 Review:I purchased this item to make grilling easier. It worked 3 times and then quit. I have contacted pyle on the net and at the fist stop they wanted to charge me $5 to talk to a teck. So I went to another site, supposedly their support site and talked to someone that not only could not understand English but could only send me an e-mail to fill out a form to send the unit back to them with me allowing them a one time charge on one of my credit cards for freight. Now this thing is only 30 days old and under a 1 year warranty so they say. Bottom line I guess I got ripped of fo $35.00 If I could give them a negative star I would. Read more

Review:Product worked great the very 1st time I used it, probably what most of the 5 star reviews here are based on. The 2nd time I used it 3 weeks later, one of the probes read ~40F higher than the other one, both in the same piece of brisket. Swapping probes, restarting it etc failed to correct the issue. The 3rd time I used the unit about 2 weeks after that the remaining working probe wouldn't register temps below 120F even though it was placed into a chicken breast that was around 50F. Once the smoker was on it shot up to 200F within 20 minutes and wouldn't come back down. Again attempted to restart etc with no success. This morning checked it again and it's reading 140F sitting at my desk at 72F. I just threw it away. Total waste of time and money, only worked nicely the very 1st time it was used. I cleaned and stored the item in a cool dry place with the cables rolled up on the provided spools. No heavy water or mechanical influence was used on it to explain the failure. I think it's probably just cheap junk sorry. Cannot possibly recommend buying it. Read more

Date:Reviewed in the United States on November 12, 2017

Review:Monitoring meat temperature is very important. When you have guest over; the last thing you want is for one of them to get sick because their meat wasn't cooked properly. Another thing you don't want is them complaining their meat was undercooked or overcooked. That's where having a good meat thermometer comes in handy. I had another brand that unfortunately only lasted a year. I saw this one and knew it was the one to get. The large display is easy to read and it is very accurate. I tested it against an analog meat thermometer and it was spot on. The leads are long and this is really helpful when you have a large grill like mine. I also like that there are dual probes. My last thermometer only had one. It was easy to pair with my smartphone and it has great range. It was cold outside but I was able to sit in the house and monitor the temperature. It requires two AA batteries which should last a long time. I would recommend removing the batteries when not in use so the contacts don't corrode. I would recommend this thermometer to anyone who likes to BBQ. Read more

Date:Reviewed in the United States on March 4, 2018

Review:Two probes allows for temperature control of the grill and the meat. Bluetooth has limited range, so you can't be too far away. Read more

Review:*update 12/01 Still using it, The battery cover is the most annoying thing in the world. I did switch to Duracell batteries and it seems like it’s holding up better. Also another way to save on the battery life is to not set a preset right away bc the alarms cause the thermometer to lose battery very quickly. I only set the preset AFTER I reached the set temp so it’ll notify me when it’s out of range. But not when it’s climbing up/down because it’ll continue beeping and wasting battery life. It works well, easy to use. Some things that let me down: 1) the batteries cover is a nightmare to open and close. It’s basically flat 2) it eats up batteries like crazy even after I turned off the alerts (if you don’t It’ll eat up the batteries in about 3-4 hours) 3) it sometimes disconnects- no big deal but if you need something that will still work while you’re in the shower on the second floor of you home- get something with WiFi. Read more

Review:I purchased the Bluetooth remote thermometer with dual temperature leads and am thrilled with it. The hardware is clean and simple and the probes seem especially durable but the real difference maker is the software application. I installed the app on my phone and quickly paired the thermometer to my phone and was ready to grill. The app includes preset target temperatures options for many different kinds of food. For example, if I want to cook a burger to medium, I don't need to do an internet search to find the correct temperature as those presets are all included in the app. The alarm sounds off on the phone when the food reaches the target temperature or if you happen to go out of the devices Bluetooth range. In my house I was able to use the thermometer at the grill on my patio and monitor the temperature on my phone on both the first and second floors of my home. After using this product I threw out my previous thermometer that had a separate transmitter and receiver with an infuriating user interface of confusing buttons that I could never master. Read more

Date:Reviewed in the United States on January 3, 2020

Review:I'm pretty sure this will change my life for the better, should have purchased way sooner! I was concerned when I bought it as it wouldn't connect to my phone, but I got a quick answer from customer support letting me know that (on my Samsung phone) location sharing needs to be on to connect. Once paired, you can turn it off again. After getting it connected, it has worked flawlessly. Left it on my BBQ, set the chicken temperature preset and when it hit that temperature, the alarm went off to let me know it was done. I was inside, 30 feet away, no connection problems. If it does get disconnected, you also get an alarm so you are aware and don't burn your meat. I can't speak to the battery life, but after a couple uses, it is still going. A rechargeable battery would be nice, but that is a minor complaint. Overall, very pleased with this purchase! Read more

Review:First thing is I am impressed how quickly it showed up. 2nd thing is it would not connect to my android 9 even with one of the passwords until I changed the APP from EasyBBQ to the Solis Thermo APP and it works fine. 3rd thing is you can select timer and set how long you want before flipping your food over or turning up/down the desired temperature you want to cook at. 4th thing is once you select the product, you’re cooking such as “Pork” and hit the edit button on the top right, you can edit what you want your temperature raised or lowered too and reset it back to original later. 5th thing is you can add your own Name or type of food your cooking and even set the high/low temperature you want it to alarm at. There are quite a few things you can do with this unit like checking out the graph on your progress during cooking. Change the color of your probes, change between Fahrenheit or Celsius. So far I am very happy with the unit. Read more

Review:It worked pretty well when we first got it, but now 9 months later it’s died completely. Won’t turn on anymore and we’ve tried everything’s. Not worth it! Edit: the company has offered to repair but we must cover all of the shipping costs there and back. This would likely cost as much as the device itself. Boo. Read more

Review:It’s ok... not the best to be honest. I plug in 2 probes and when I use the magnet to have it stick to the bbq, it barely hold on. The app is very unreliable. On my iPhone I stay connected as long as possible but sometimes it auto disconnects causing the memory/graph to restart and loose all past memory. The reader itself doesn’t stop beeping. It beeps even if you press the button. The probes seem to work well though. All in all, it’s ok, but not the best. Read more