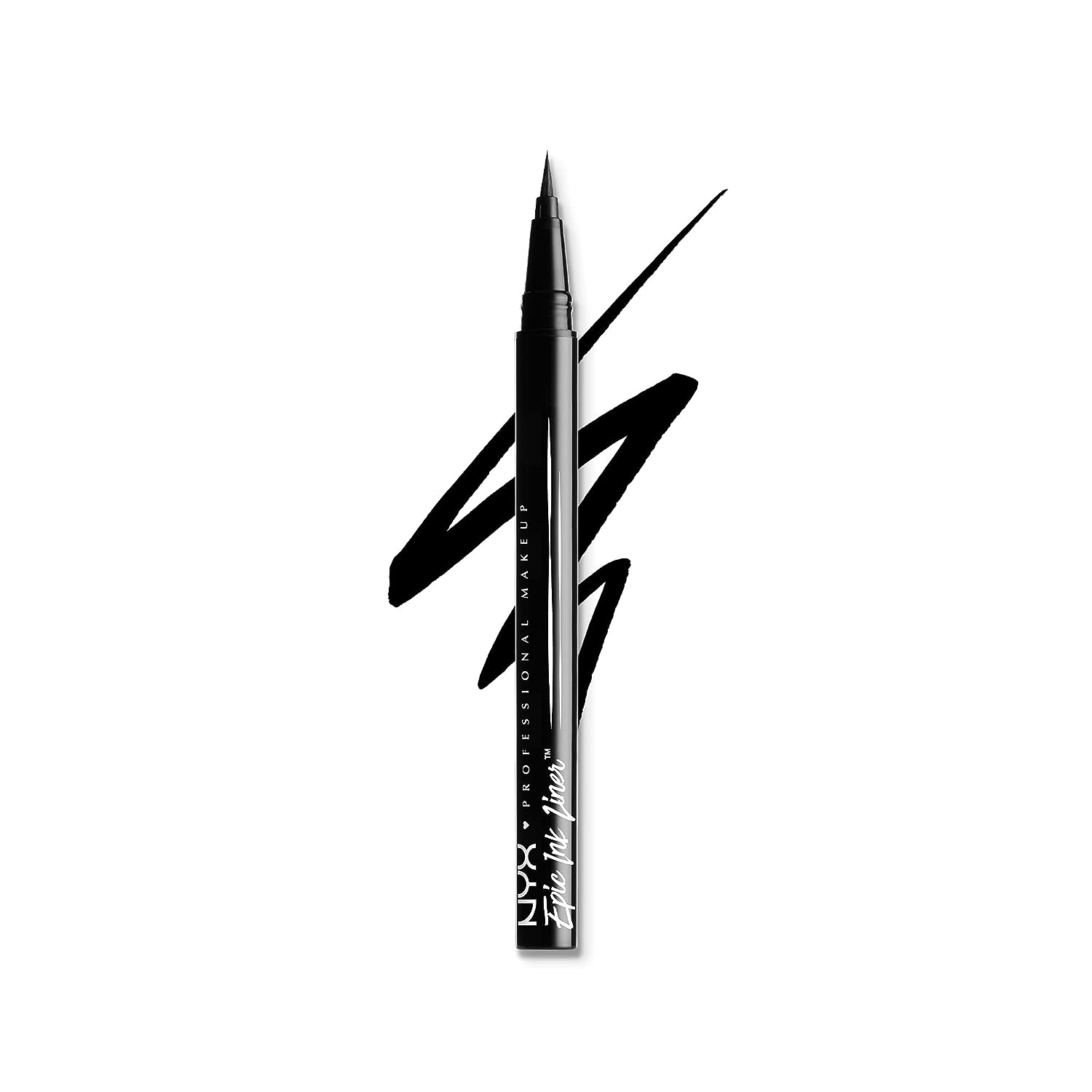 Add to whishlist
Share:
Cost Break Down
Color: Black |  Size: Pack Of 1 Live for super-sharp wing inspo? Don't just "like" all your faves, draw 'em yourself using Epic Ink Liner. Featuring a slender and supple brush tip, this in10sely pigmented, waterproof pen lets you achieve Black liquid lines effortlessly. Every stroke is unbelievably fluid for a defined finish. Control the thickness of your lines by pressing down just a touch. Fine and natural, broad and bold-the look is always up to you.

Date:Reviewed in the United States on June 2, 2018

Review:I have heavy lids that have deflated after major weight loss, and now sit ON my lashline. Because of this any eyeliner will transfer right? If i sweat or cry I'll have a copy of the perfect line I made somewhere on the upper lid right? Well I was trying them all with NO luck no matter what they cost or claimed! Then I bought this one. Unfortunately this one came just as I was about to give it the ultimate test. My husband of almost 40 years passed away after fighting cancer for 4 years. He was my everything and I still love him with everything I have. He died at home with me 4 weeks ago and I have worn this to the funeral and everyday since. I've shed buckets of tears and because it's in the 90's and 100% humidity here in Ohio, I've sweat rivers too. Not one transfer, smudge or fade away! I hope you NEVER have to worry about your liner under circumstances anything like this but if you cry happy tears or sweat you can count on this one more than any other one I've tried! Read more

Review:I don't usually write reviews, but I had to rave about this eyeliner because it's amazing. My go-to eyeliner used to be the Kat Von D tattoo liner, but this is my new favorite. I think the quality is even better overall, plus it's at least $10 cheaper. It basically fits all of the requirements I would want in my perfect eyeliner. It's affordable, extremely black, opaque, easy to use, waterproof, stays on for a long time, and the tip is quite thin so you can get wings as sharp as a sword. I also usually have to use makeup remover and concealer to clean up my lines, but I barely need to do any maintenance with this. My cat eyes have been turning out so clean and beautiful. A lot of reviewers were also complaining about how this eyeliner bled everywhere, but I just wanted to say that their packaging might have been faulty because I had no problem with mine. In fact, mine bleeds less than most eyeliners i've ever used. Read more

Review:Works like a charm. Kat Von D was my go to but won’t give her my money to spread anti-science rhetoric about vaccines. This NYX may work just as well if not better, and is less than half the price. Good job NYX. Update: after having this for sometime, the cap would catch part of the brush when I put it on and curl then outward... it made it extremely hard to apply the eyeliner with sporadic brush hairs sticking out in an opposite direction. Be very careful putting the cap on, it’s most likely my fault but it sucks. Read more

Date:Reviewed in the United States on October 22, 2018

Review:This stuff is amazing! I've been using the kat von d tatoo liner, but since she's canceled, I've been looking for a sub that's more affordable, and I totally hit the jackpot with this one! It's so pigmented! (I have a deep complexion) and it doesn't smudge at all. Goes on really well, makes a clean cat eye. Super happy with it Read more

Date:Reviewed in the United States on December 6, 2018

Review:Most of the reviews were highly positive. I should have paid more attention to the negative ones. OK, I JUST received this yesterday and have used only once, but have been wiping smudges off my face all day - super embarrassing! I don't know what product the positive reviewers were using - the ones who said that this is waterproof, smudge-proof (even on oily skin!) and the best eye-liner ever! I guess I'm back to looking for a product I can recommend that positively! Very disappointed in this one! Read more

Review:Really want to like this, but this weird bleeding happened on my first use. The liquid creeps up the wrinkles of my eye! Weird. Tried lid primer and same result. Plus, Everytime I open it it pours and flings ink everywhere... SO messy and bleeds bad for me. I wish I knew some secret as to why and how to make it take two second like everyone else. Read more

Date:Reviewed in the United States on October 15, 2018

Review:Disclaimer: I have extremely oily eyelids. Like, they laugh in the face of most waterproof eyeliners or mascaras. It's an issue. But not with this eyeliner! This little guy has some staying power, for sure, but only when I properly prime and shadow my lids. Otherwise, it's a fighter, but usually gives up come afternoon, but that's usually when normal liners give up even with priming and shadow, so there's that! I DO have to say that the brush tip on this takes some getting used to as it's not as firm as the nib on the Kat Von D tattoo liner. Also the liquid takes a little longer to dry than the Kat Von D tattoo liner so I have a fold up Chinese fan that I use to aid the drying process. Lastly compared to KVD, it's a little bluish and reflective when doing a really dramatic, thick line. That's not necessarily bad, but I prefer jet black and matte. If I do a super thick line then I'll go over it with a matte black shadow to dull the shine. That's just a personal preference of mine, though, so I'm not knocking off performance points for nitpicking. Shake it before each use and give it a go. :) Read more

Date:Reviewed in the United States on June 5, 2018

Review:My go-to eyeliner used to be the tattoo liner by Kat Von D. But of course at $20+ for a liner that I used regularly it just wasn’t affordable. I did some research and I decided to give this a shot about a year ago when I went to a water park. This eyeliner is ridiculously water-proof. Of course if you rub your eyes it’ll come off but if you leave it as is it’s fine. And when you reapply it doesn’t do that annoying layering most liners do. It’s become my absolute favorite liner to use and it’s super easy to get the perfect line. I can’t recommend this enough. It’s been with me through water parks, hot summer days, rainy days, excessive sweating, and those emotional moments. It’s a heckin’ great liner for the price point! Read more

Date:Reviewed in the United Kingdom on July 9, 2020

Review:I was recommended this eyeliner by a fellow lady biker when I mentioned that my make up runs and fades under my motorbike helmet. As you can see from my picture, it's definitely stayed on! (i'm the one on the right with the camera on my chin) I'm really pleased that I've finally found something that lasts under my helmet and will definitely buy this again Read more

Date:Reviewed in the United Kingdom on October 14, 2020

Review:I happen to buy this eyeliner on a regular basis but before I've been buying it straight from the shelf. This time I ordered it online and it is fake! It came all the way from China, took about 3 weeks to arrive, and when comparing it with the ones I got from the store you can clearly tell it is fake! And the tip is not even brush style, it's like a hard sponge. Should be taken down off Amazon! Read more