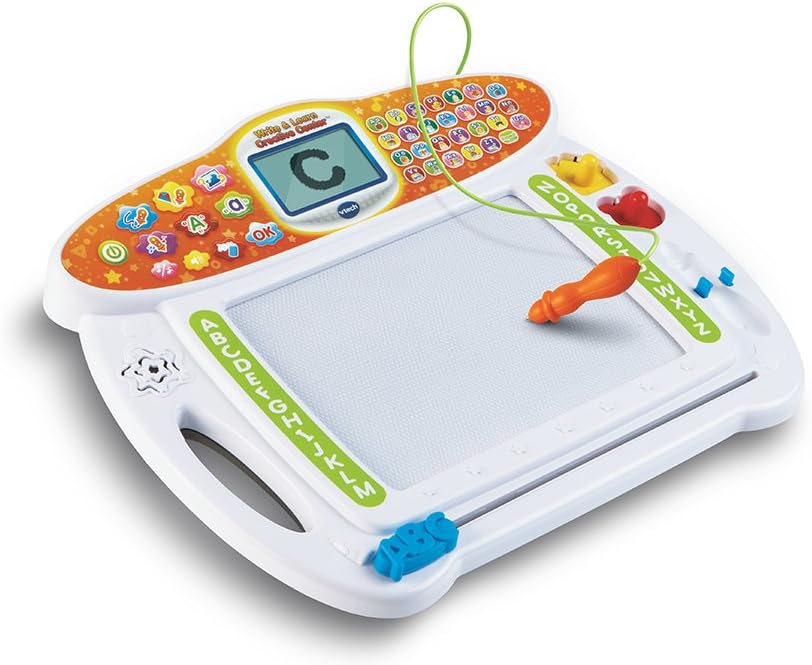 Product Packaging: Frustration-Free Packaging The Write and Learn Creative Center by VTech provides children with an interactive and fun way to give them a head start on how to write. Animated demonstrations help preschoolers follow along to learn proper stroke order for uppercase and lowercase letters. Customize the creative center with your child’s name and the screen will show them how to write it step-by-step. Choose a drawing activity and your child will learn to draw by progressing from simple lines and shapes to 26 different objects. Your little artist can then explore their creativity by drawing their own pictures with the included stencils and stamps while listening to the cheerful music. Requires 2 AA batteries (batteries included for demo purposes only; new batteries recommended for regular use). intended for ages 3 to 6 years.

Product Packaging: Frustration-Free Packaging The Write and Learn Creative Center by VTech provides children with an interactive and fun way to give them a head start on how to write. Animated demonstrations help preschoolers follow along to learn proper stroke order for uppercase and lowercase letters. Customize the creative center with your child’s name and the screen will show them how to write it step-by-step. Choose a drawing activity and your child will learn to draw by progressing from simple lines and shapes to 26 different objects. Your little artist can then explore their creativity by drawing their own pictures with the included stencils and stamps while listening to the cheerful music. Requires 2 AA batteries (batteries included for demo purposes only; new batteries recommended for regular use). intended for ages 3 to 6 years.

Date:Reviewed in the United States on November 13, 2018

Review:Unfortunately, it missed the mark for us. Here is the reason for 3 stars......#1 - it isn't very loud. Yes, it's turned to the highest volume and yes, I have 4 kids in the house making it hard to hear anything. But, he spends most of his time getting frustrated saying "what did it say?". #2 - this is a big one. V Tech completely overlooked the fact that not every child is right handed. My son is a lefty and the pen has a pretty short cord that is attached on the right side. If you are careful every single time you grab the pen, you can make it work. But, there's this little "lip" that the cord catches on more often than not making it really short. It's incredibly difficult to comfortably write with the cord stretched that far so I find him trying to use it right handed. This is incredibly frustrating for both of us. #3 - why in the world the makers of any mangetic doodle type boards put the eraser bar on the bottom is beyond me. He's writing along and catching the "eraser" with his shirt sleeve and literally undoing what he's doing as he goes along. He gets incredibly upset every time he does it. It's a shame, because it has the potential to be an awesome toy. The activities are great and the included stencils store in the back. Unfortunately, it has been more a source of aggravation for us than a fun, educational toy. Read more

Date:Reviewed in the United States on January 22, 2017

Review:Great toy, my three year old loves this. It's his go to toy every day. I write and draw on it and he traces everything I do but.... Only HUGE flaw is the battery compartment, it just opens and the batteries can fall out. Not good! Not really child proof in my opinion. I would prefer it to have a screw so I wouldn't have to worry about my kid playing with batteries or the batteries going mouth. I also have a one year old so I'm always making sure the compartment is shut and the batteries are inside. Im going to have to end up duck taping this shut to avoid any accidents. Im hoping the company can fix the battery compartment for future owners. I know I would like to not have to worry on a daily basis about the batteries falling out of my sons favorite toy. UPDATE: I called the company regarding the battery compartment. They first told me to call Amazon to fix the problem, this is not amazons problem. I called back again, this time I had to argue with them for half an hour over the safety of this item. They offered to replace the item with the same product - no thanks I don't need four batteries loose in my house. Then offered for me to pick any toy up to $24. Which I declined because there is not another toy similar to this one that they have, nice gesture but I felt like they didn't care what I was saying. The fact I'm concerned a child can get ahold of a batteries scared me. Overall they said this toy is not meant for a three year old (although my kid is advance in writing so he should be able to use this toy) they also don't think about what if that family has other children who are younger. This compartment has opened multiple times since I have owned it (since Christmas) they didn't seem so concerned that batteries can just fall out... Which concerns me. So please watch your children with this or do what I do and duct tape it. It's a shame because it truly is a great educational toy. Read more

Date:Reviewed in the United States on January 2, 2020

Review:I really wanted to love this. It’s been in my wish list for my son for the past year. I finally purchased for it for him for Christmas, he is now almost 2 1/2. I thought this would be a good age. And it would if he were right handed. My son left hand seems to be the dominating hand, and where the pen is connected is on the right side, So it is difficult for him to use it with his left hand. I am a righty, so I guess this is just the start of obstacles that we will face, unfortunately. It would be better if the pen was a little bit more central in where it’s connected, for kids that are not right handed. I do have another magnetic pen that was detachable from a set from the dollar store that we are able to use with the set though. Read more

Review:I would have given this five stars if it were safe. However, I feel obligated to warn other parents that the battery case has no screw to keep it closed. My kids have opened it over and over again. I've taped it and they've gotten the tape off. So they aren't allowed to use it unmonitored because it's simply not safe. Read more

Date:Reviewed in the United States on January 9, 2019

Review:***********IT LOOKS LIKE VTECH DOES NOT CARE ABOUT THEIR CUSTOMER************ The toy was having a leak and liquid was spilling out from the board slowly. Initially I though it may be water or something else but later I figure it out that it was coming from the board and It was happening from day 1. When I called customer service they just said that your 90 days warranty is not valid anymore and they cannot do anything. I don't know how harmful was that liquid. It was just a waste of money for us. We recently got a gift "Vtech Activity Desk", costly and better toy and it also stopped working after exactly 3 months :-) and I got the same answer from the customer service that they cannot do anything since 90 days warranty is over. I will not buy Vtech product anymore. Read more

Review:We were very excited to get this for our little guy. However upon receiving it, there was already a few small areas of the magnet screen that were damaged. We have had it now since Christmas and the magnetic screen is already showing quite a few signs of failing. The strip to clear the drawings only clears it if you go back and forth multiple times and it still leaves parts of it. The computer part of it is ok, but it really is a waste to have when the screen portion is so flimsy and damages so easily. Overall not very durable and far too expensive to only partially work! Disappointed in this purchase!! Read more

Review:I'm really happy I purchased this creative centre for my son. The main reason was to get him ready for jr kindergarten when they learn to write. I wanted him to start practicing writing while having the ease of erasing and avoid to much paper and/or erasers. I love it, well he is till getting used to it. For now at least we learning to draw circles with no pressure. In terms of portability its a bit bulky so I haven't taken it around with me, but thats okay, not everything has to be portable. Read more

Review:This is a great toy, except the screen cracks easily and leaks fluid. I’ve purchased two, because the first one cracked, and then the second one cracked after a few months. It is disappointing because the toy is really fun and the songs are great! Read more