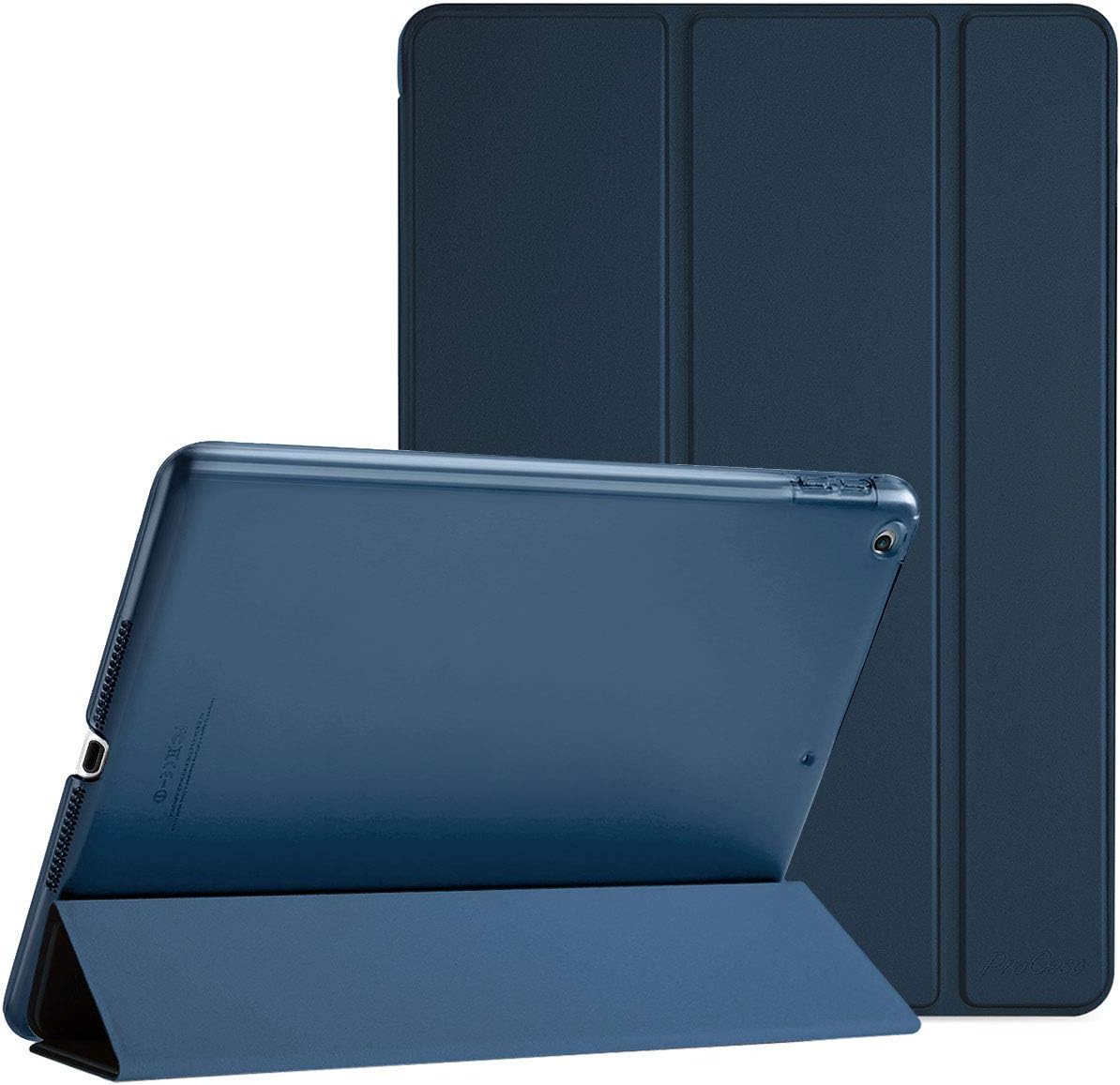 Add to whishlist
Share:
Cost Break Down
About this item This fits your . Make sure this fits by entering your model number. P.when("ReplacementPartsBulletLoader").execute(function(module){ module.initializeDPX(); }) Protective case for Apple iPad 9.7 Inch (Old Model) 2018 iPad 6th Generation (Model number A1893 A1954) / 2017 iPad 5th Generation (Model number A1822 A1823) ( It is NOT compatible with other previous model iPads nor any other devices) Ultra slim and lightweight hard back design adds minimal bulk while offers your device great protection The translucent frosted back cover allows you to see the Apple icon through your favorite color, while protects your device against fingerprints and scratches Classic and professional design; Full access to all features (Cameras, Speaker, Ports and Buttons) Support auto Sleep/Wake feature; Magnet secures the case closure, easy snap on and off
Product Dimensions
9.7 x 6.7 x 0.3 inches
Item Weight
5 ounces
ASIN
B06XVRXKT3
Item model number
PC-08360377
Is Discontinued By Manufacturer
No
Date First Available
March 25, 2017
Manufacturer
ProCase

Review:I really struggled with which case to order for my new iPad. I knew I wanted a cover similar to the Apple one, but I wanted more protection for the back so I would not get nicks and scratches. There were a number of options that all looked very similar that had minor differences in features. I ended up ordering the ProCase figuring what do I have to lose for $15. The ProCase arrived in new condition and was nicely packaged to keep it protected. My iPad securely fit into the case. The cutouts for the lightning plug and camera are perfect and all buttons (power, volume) are easily depressed. I like that the cover is lined with a soft material to protect the screen and that the shell covers the back of the iPad to protect it, but also is translucent so you can see the Apple logo through it. The cover easily moves into place for a view or for the typing position. I am impressed with the quality and believe this cover is a great value for the money. I highly recommend this case. Read more

Date:Reviewed in the United States on December 24, 2018

Review:Bought for my grandmother who uses an iPad for casual reading and streaming videos. The material quality is decent. I give is a B-rating. It’s not great as in some cases that makes you feel like with long-term use there won’t be scuff marks on the back of your device. However, it does get the job done. My grandmother rarely drops things, so I doubt I’ll be able to rate how well this case does in a drop test. However, it isn’t damaged after a few weeks of shuffling around in the house and purse. The durability and versatility is also a B-rating. Well, versatility is a B-, since it only gives you, at most, 2 viewing angles if you have some ingenuity. Another ding in terms of rating is color availability, my grandma wasn’t fond with the lack of colors as she wanted gold. It seems like the creators did cater to a wide-range of colors, but what’s lacking is the depth of the color. For paying nearly $20, I think we should have the option of more color choices, such as differing shades of coloring. Read more

Date:Reviewed in the United States on April 4, 2020

Review:I was very pleasantly surprised by the quality and durability of this case given how reasonably priced it is. I use my iPad for work and needed something that would let me carry it easily without adding a lot of bulk. This case is very thin and I like how the case folds to create a stand and the magnets in the case don’t just operate the sleep function but hold tight enough to keep the iPad upright on the table in the coffee shop (or wherever I happen to be working). I purchased the blue and the card itself is slightly transparent while the cover is soft and holds perfectly to the iPad’s screen when closed. My iPad has been bumped a couple times and the case does its job and has kept the iPad in good condition without the case cracking or breaking, and the “hinge” seems perfectly fine my continual opening and closing of the cover - no signs of wear or tearing after a month or more of use. Read more

Date:Reviewed in the United States on September 20, 2020

Review:I love the look and feel of this cover. It doesn't add a lot of mass to the iPad and the semi-transparent back is attractive. On my iPad the magnetic on/off feature doesn't seem to work. However, I have had this problem with other covers and may be a problem with my iPad. The on/off button works fine. The up volume button works fine but the down button doesn't seem to align properly and does not allow me to turn down the volume. Yes, my down volume button works with out the cover, so I believe the problem is alignment. I have always had the leather folio type cover before so it takes a little getting used to the slim and slipperiness of this one. The cover doesn't always want to lay flat on the front of the iPad but perhaps it will soften with use. Read more

Date:Reviewed in the United States on January 21, 2019

Review:I purchased this iPad cover after having to send back a case a had ordered from a different company. The first case did not fit my iPad and was too expensive and complicated to install. The case I received from Tech Vendor was PERFECT! It snapped right on my iPad and looks great! I have even dropped it a few times and NO damage. The case cover can be folded back to make a stand which really came in handy when I wanted to prop it on my kitchen counter to follow a recipe. This case is functional, nice looking and the price point is great. I would however recommend purchasing a screen protector to compliment the case. Read more

Review:I’ve had this case for nearly 9 months now. Given the fairly inexpensive price tag I would say I this isn’t bad by any means. I bought this case because I didn’t feel like being insanely careful about tossing around my iPad while having the case protect it, but after almost 9 months this thing is pretty beaten up. With that being said, the most glaring flaw of this case is the durability. I live in a carpeted apartment and the plastic around the bottom left where it clips to the device has chipped. The back of the case is so scratched up it’s gotten pretty ugly and the front flap cover has taken many scratches, leaving the case looking beat up. But I am happy that the case has suffered the damage without having put a single scratch on my iPad. My device looks brand new 9 months later and I credit this case for keeping not only the body, but screen protected properly. The magnet on the front is strong enough where it won’t just swing open on its own. And the case itself hasn’t scratched the aluminum body like some other cases out there. I prefer cases that provide protection without adding bulk, which this case does, but I can’t say the durability is anything special. If you are careful about handling the case you may not find the case to be damaged like mine has. But given my frequent traveling and need of durability, I may need to look for a stronger solution if I’m buying another case for this device. My mother has the same case for her iPad, after about 3 months her case still looks pristine but she’s been very careful. I’d pay extra for the peace of mind that my case will hold up to my day to day use. Read more

Review:At the beginning it eas very good, but it is only 8 months and the plastic is already broken now it is not holding the Ipad and it is not safe, it falls. And I did take care of it. Very Disappointed.. I will need to buy another this time I will go for the original from Apple because if you buy other at the end you pay more. Read more

Review:I regret buying the product as a last minute order. I bought it for my Mum’s new iPad, the case fitted properly buy the smell of the material was disgusting, it smelled of fish guts!!! And I’m not exaggerating!!!! Unfortunately I couldn’t returned it as I was going on a long haul flight and I was desperate for a case and bought it a day before my flight! The smell was so bad that I sprayed some perfume but it didn’t work!!! Once I gave it to my Mum she also hated the smell but before throwing it away we washed it with detergent twice and the smell was still there. What a waste of money as I had to buy another case for her iPad and a bit embarrassing to have to give such case as a present ... Read more

Date:Reviewed in the United Kingdom on October 22, 2018

Review:This item represents great value for money. I bought it for an iPad as the official Apple one had worn, and the cost of these are ridiculously high. Whilst not as good as the official Apple case, it is not far off...and at a fraction of the cost. I was sceptical before it arrived due to the price, but it was a pleasant surprise. I would definitely buy one of these in the future again. Read more

Review:I bought this cover when I bought my latest iPad and it served me well for about two-and-a-half years of very frequent use before the it became a bit worn on the front cover. Initially I scoured Amazon looking for alternative covers and did try one but was disappointed with the rubber backing that held the iPad in place. So I returned it and just ordered this one for a second time. The plastic backing holds the iPad firmly in place and all of the controls are easy to get to. The front cover has a soft material underside and the sleep mode works fine. Yes, the front cover will eventually begin to wear over time, but it still works fine - it just begins to look a little tatty. But for the price I felt two-and-a-half years of heavy use a reasonable amount of time, but that's a personal thing. So if you want a no-nonsense and nice-looking cover for your iPad that holds it firmly in place, this is a good choice. Read more