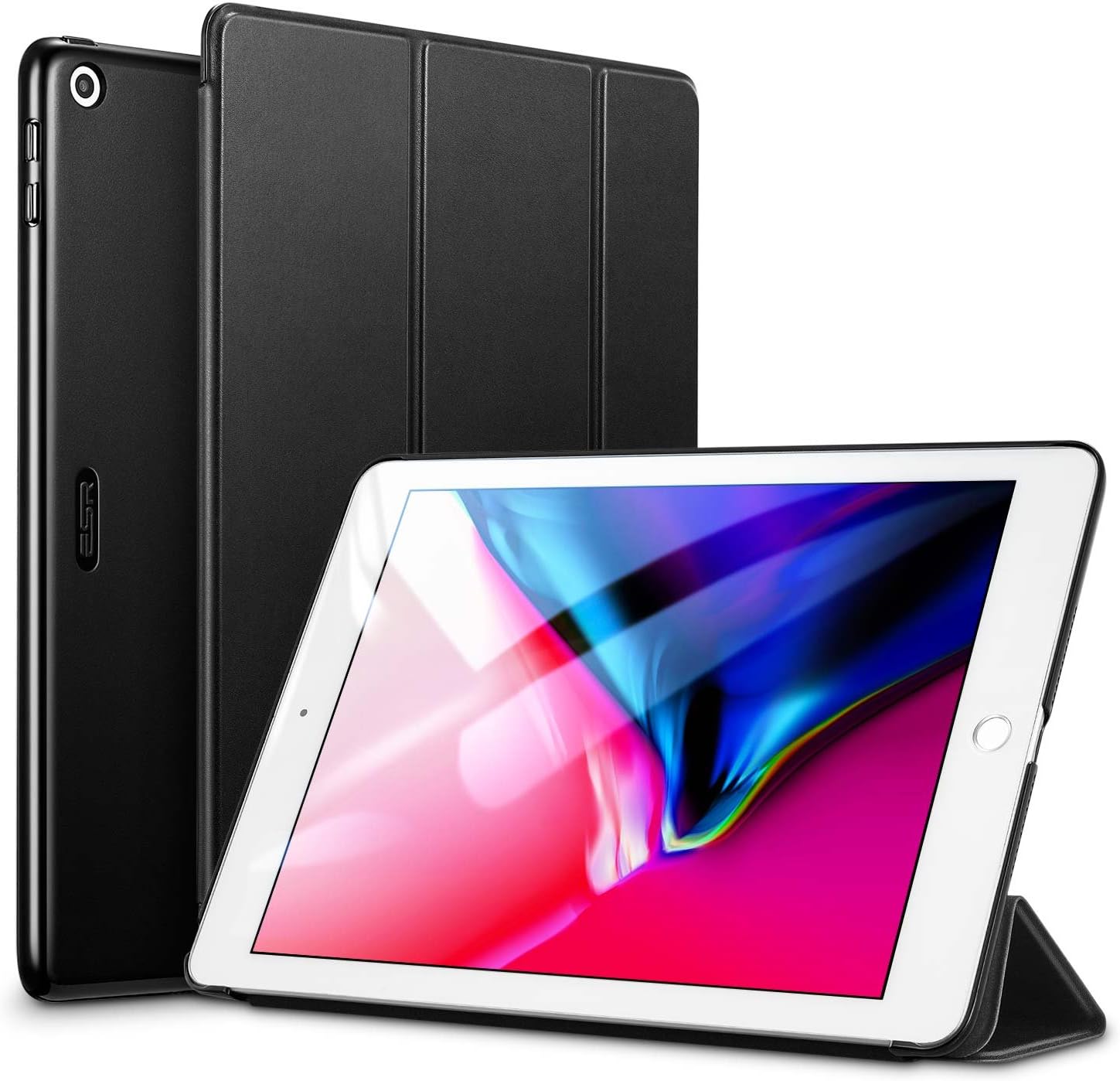 About this item This fits your . Make sure this fits by entering your model number. P.when("ReplacementPartsBulletLoader").execute(function(module){ module.initializeDPX(); }) [Compatibility]: Designed for the iPad 6th generation 9.7 inch 2018 and 2017 model(Fit models: A1822, A1823,A1893,A1954) only, NOT compatible with iPad 7th generation, iPad Pro 9.7, iPad Air,iPad Air 2 and other models. [Scratch Protection]: Powerful magnets keep the front cover sealed and your iPad safe from scratches. [Reliable Auto Sleep/Wake]: Stronger magnets ensure the auto sleep/wake function engages quickly every time. [Stable and Sturdy]: Multiple built-in magnets lock together when in stand mode. [Material]: Made with a durable PU leather exterior, a soft microfiber lining, and a sturdy PC frame. The case provides total front-and-back protection against fingerprints and scratches.

About this item This fits your . Make sure this fits by entering your model number. P.when("ReplacementPartsBulletLoader").execute(function(module){ module.initializeDPX(); }) [Compatibility]: Designed for the iPad 6th generation 9.7 inch 2018 and 2017 model(Fit models: A1822, A1823,A1893,A1954) only, NOT compatible with iPad 7th generation, iPad Pro 9.7, iPad Air,iPad Air 2 and other models. [Scratch Protection]: Powerful magnets keep the front cover sealed and your iPad safe from scratches. [Reliable Auto Sleep/Wake]: Stronger magnets ensure the auto sleep/wake function engages quickly every time. [Stable and Sturdy]: Multiple built-in magnets lock together when in stand mode. [Material]: Made with a durable PU leather exterior, a soft microfiber lining, and a sturdy PC frame. The case provides total front-and-back protection against fingerprints and scratches.

Review:I just purchased the New iPad 2017, (April 2017) and much to my chagrin, the only case Apple currently has for it is the magnetic cover. I verified this both in the Apple store and in an on-line Apple Chat. I had the magnetic cover on my old iPad, and it did nothing to protect the device. It is very difficult to navigate through the "zillions" of iPad cases for sale by third parties. . I want to thank the customers who purchased this case and reviewed it - specifying stating that they, too, purchased the New iPad 2017. I would never have found this case without your reviews. I received the case today, and I could not be more thrilled!! The iPad fits into this case EXACTLY -with all the functions perfectly accessible. My old iPad slid off the couch on to the carpet, and the frame bent. I think this case would prevent damage from this type of accident. My thanks to Electronic Silk Road Corp. for having this case ready for consumers. I am very thankful to have found it. One more thing... the price is too good to be true- except that it IS true!!! Read more

Review:After being somewhat disappointed with my official $39 Apple Pad Smart Case, I didn't know what I'd get with this $11.99 ESR iPad Smart Case. But the price was right and the reviews pretty good. So I took a chance. The main thing that appealed to me was that the ESR case provides both front and back protection for my 2017 iPad, whereas the Apple version does not. I received the ESR promptly after ordering, in perfect condition and well packaged. The iPad snapped into the case perfectly and all the buttons worked fine. I was prepared for the "smart" function not to work properly but it worked fine, turning the iPad on and off when the cover was opened and closed. I later added an Anker tempered glass screen protector to the iPad and wondered if the smart function would still work since the screen protector is kind of thick. No worries, the case still closed securely with the smart function intact. The only negative feature I've encountered is that the case is very slick and slippery. Which makes it slightly harder to hold and pick up off a flat surface. Aside from that, the ESR iPad case is a well-designed top-notch product at a superior price that does exactly what it's supposed to do. Note: The attached photos show the ESR case next to the Apple case and by itself with the iPad installed. Cheers. Read more

Date:Reviewed in the United States on November 27, 2018

Review:I was spending minutes, hours, days passed for the search of the perfect case. I stumbled upon this magnificent piece, not for the price but for the experience i knew it would one day bring me. I gazed upon it, allowing its vibrant reds to penetrate my soul. I added it to my cart, but in other ways i added it to a part of my life. I hit purchase, and i patiently waited for it to arrive at my doorstep. Upon its arrival, not only to my doorstep but to my world i knew my life would be different. I quickly popped my ipad in and boom.... my ipad found its companion. Fitting perfectly into every indention and curve. It would be wrong to say i did not love it, it would be wrong to say it was not everything i wanted, it would be wrong to not give this piece of art a chance.... Read more

Date:Reviewed in the United States on November 21, 2018

Review:This seems to be a decent case so far as long as you understand what you are getting. The smart cover function works as promised and the magnets are very strong. The cover itself is a soft plastic and it is thick enough protect the screen from impact. The back cover is a stiff thin plastic that will offer very little impact protection but it does offer good scratch protection. If you are careful with your Ipad you should not have an issue if you are looking for a case that is not bulky. The soft cover is glued to the hard back on inside and outside on a small strip. It seems to be good for now but if the adhesive is poor this will be a point of failure over time. I installed a glass screen protector and it does not interfere with the case. Read more

Review:I love rose gold Apple products, but I bought my iPad before I knew it. I love this case because it makes me feel like I have a rose gold iPad. The protection is nice, it completely covers the front and back so it prevents scratches when you are using your iPad or setting it down on a hard surface. The front cover folds up in the standard triangle shape to use as a support for your iPad. This cover also provides easy access to all the buttons and camera. Read more

Review:I’m impressed. I just bought the new 2018 IPad, and I was dismayed to find out that Apple doesn’t sell a full cover anymore, just the front cover. When you’re spending this kind of money on an iPad, it makes sense to keep it from being scratched or dented. First I bought the Apple cover, which kept coming off, and the back of the iPad was exposed. So I saw this available on Amazon and decided to give it a try. I got it today and I’m so impressed. The front looks like an Apple cover. The back is a see-through, hard plastic. Looks great and fits perfectly. And by the way, it also works with an iPad 2 Air. This is a fraction of the cost you’d have to pay Apple. Read more

Date:Reviewed in the United States on July 1, 2017

Review:After reading many negative reviews on this ipad case, I wasn't sure what to expect when this case arrived. For those reviewers who stated the cover's cut outs didn't line up with the camera, volume buttons, etc on the new 2017 Ipad - I'm not convinced they were actually putting the correct iPad model into this cover. All cut-outs were perfectly aligned with my iPad 2017 model. As for reviewers mentioning it being made out of plastic, iPad auto on/off not working using the magnets embedded in the cover and not laying flat on the screen. That is only partially true. It's indeed made out of hard plastic - but what do you expect for the very low price? Its a cheap alternative to a higher quality $50+ cover. It may not survive a 3' fall, but for those who are careful with their electronics, it does provide a level of protection better than nothing. It does turn off my iPad when I close the cover over the iPad's screen and it does indeed lay flat on the screen when closed. When unfolded, the horizontal and vertical stand works fine to provide a stable platform on a table or desk for watching movies or sending emails, etc... For as little as I spent on this case, I was quite satisfied with the quality that it provides. Read more

Date:Reviewed in the United Kingdom on November 6, 2018

Review:I’m very pleased with this cover. It’s smart looking and doesn’t add much weight to the iPad. The wake up/sleep function works perfectly. Delivery time was excellent (it was actually delivered on Sunday). I have rated durability with four stars rather than five - this is only because I have had the cover a couple of days and it’s too early to tell if there will be any durability issues. As I mentioned above I am very pleased with product, so much so that I have ordered another for an iPad Pro 10.5 (gold colour this time) The product is reasonably priced. I recommend this product. Read more

Review:Really nice feel and design for the price and fits my iPad perfectly, it's the new 2018 9.7 iPad model btw, I especially like the transparent back of the cover so the iPad logo and Apple symbol can be seen. Easy to fit and remove and all cut outs line up just right. I've noted some people have had broken edges after a while but I haven't had mine long enough to comment on that yet, so I'll be keeping an eye on that. So far, so good though and really pleased with the cover. Read more

Date:Reviewed in the United Kingdom on November 23, 2018

Review:I love my new ipad. It took a few attempts when getting it started and after about the third time it went through the process, so keep trying. It comes up asking you for your previous passcode, which of course because it is new you never had a previous passcode or password. Just keep putting in your newly made up one and password, eventually it accepts it and you can go forward to the next stage. This happened again on another one I bought for my partner. Before you start create a password of letters and numerals and a passcode of 6 digits, have this ready before starting it up. the ipad is also a great size to use a ipad/tablet pen. Great photo's, so clear, love playing my word games which you find on 'App Store' (same as Play Store on android). Love it! Read more

Date:Reviewed in the United Kingdom on October 11, 2018

Review:Have just been brought a new generation 6 iPad and needed a cover as the new one is smaller then my previous one. This fits lovely, it's not as thick as my previous one and shuts off when the cover is put on. It makes the whole thing slimmer. Also arrived quickly. Read more

Date:Reviewed in the United Kingdom on February 14, 2018

Review:This case fits my new 9.7 inch iPad 5 really snugly and is good protection. I like the way that the magnets hold the cover on tightly and the general feel of the back. So far there have been no problems with it and, for the price, it was a great purchase. It does the job very well and (so far) is as good as any of the other versions that are much more expensive. Read more