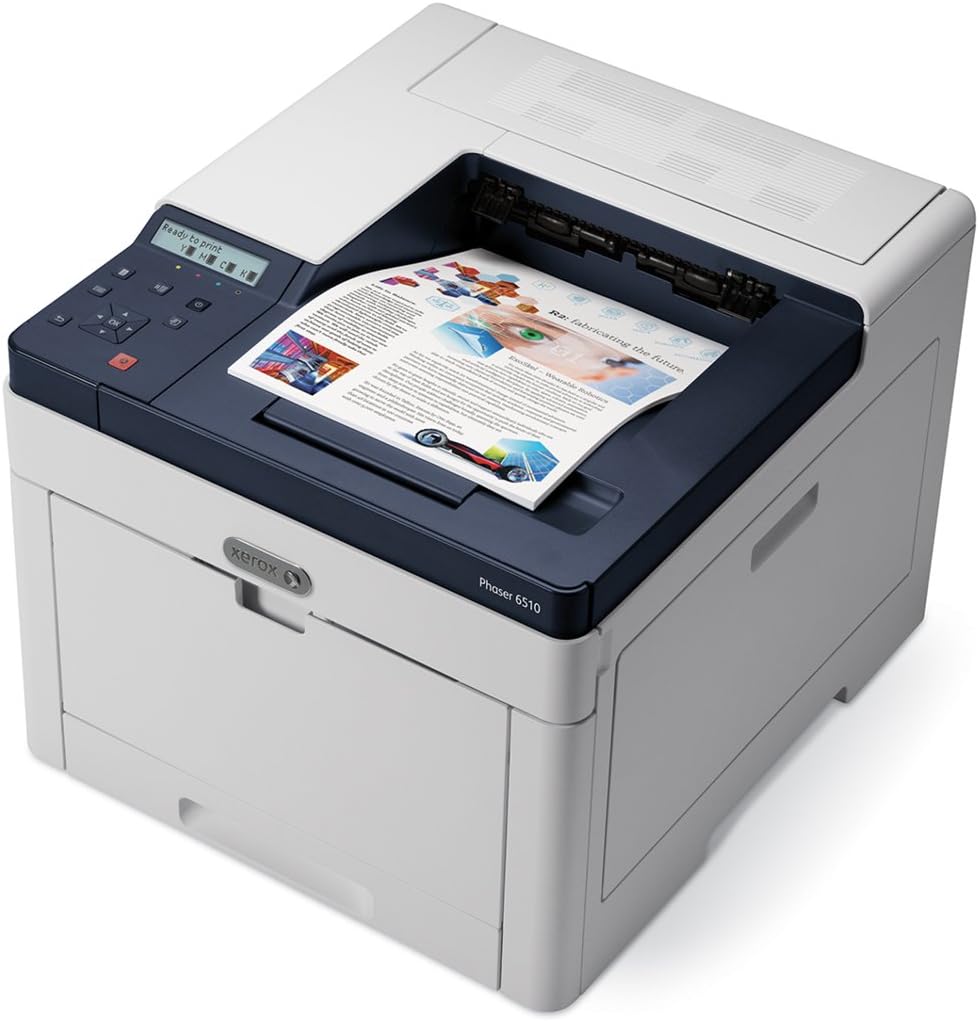 Style: Printer The Xerox Phaser 6510 meets the demand for a printer that connects with mobile devices while simultaneously delivering outstanding color prints. Whether you’re outputting snapshots from your smart phone or Photoshop files from a tablet or PC, it delivers 1200 X 2400 dpi resolution and PANTONE color matching.

Style: Printer The Xerox Phaser 6510 meets the demand for a printer that connects with mobile devices while simultaneously delivering outstanding color prints. Whether you’re outputting snapshots from your smart phone or Photoshop files from a tablet or PC, it delivers 1200 X 2400 dpi resolution and PANTONE color matching.

Date:Reviewed in the United States on January 11, 2019

Review:It's actually cheaper to buy this printer than it is to replace the toner. Once a cartridge runs out throw it away. That cost to much because you don't get much per cartridge. Any models made after 2017 will only take Xerox catridges. Don't buy Xerox. Read more

Date:Reviewed in the United States on January 1, 2018

Review:I bought this as a replacement for my Phaser 6360 DN. The older printer lasted 12 years until a power surge finally killed it. It cost over two grand new and was worth every penny. The 6510 DN costs about 10% of the older printer and is a bargain at that price. While it is not as fast as the other one, it is fast enough and I'll gladly trade saving a lot of money in exchange for a bit of speed. Installation was mostly easy, but it took a bit to figure out how to get it to print on two sides (the reason I bought the DN instead of the base model). I ended up calling Xerox technical support to see if they could help and their expert tried the same things I tried (installing both drivers). Finally he put me on hold to ask an expert. While I was on hold, I played with the printer properties in Windows 10 and discovered the trick. In Windows, go to the printer properties. Select the Configuration tab. Change the Duplex Module from "Not Installed" (their default, guess Xerox uses the same driver for the base model too) to "Installed". That's it - then it will print on both sides as it should. The toner replacement seems expensive. Will try a generic and see how it works. Other than that, the printer is working great so far. A wonderful price for the printer. Read more

Review:I want to love this printer SO SO SO badly. I run a small business and the reasons I purchased this printer was for its high printing resolution and that it is a Pantone certified. I had the printer for less than a month and it started leaving black streaks on the edges of my paper. My business revolves around my printer so this clearly was an issue. Xerox sent out a technician who determined that it needed a new transfer belt, which of course, was on backorder. Obviously that wasn't going to work so they sent me two new printers. Keep in mind that throughout this process I was very clear on how I use this printer, I print on a full sheet label paper, which some printers are just not cut out for and told Xerox Customer Support that if I need to upgrade my printer just let me know. They assured me that my printer was more than equipped to handle what I needed it to do. I received my two replacement printers and in less than a month they BOTH started leaving the marks again. I've been emailing one of their custom service reps for 2 months now and I informed her of the issues continuing and she sends me a link to call and find a Xerox Sales Rep in my area so that I can find a upgraded printer that works for what I need. I just got off the phone with them because I have purchased a new printer from another company and my money back and Xerox is insisting on sending out another technician to look at the broken printers. I'm sure its a great printer if you never want to print anything but don't waste your money this Xerox printer that costs $400 for toner replacements and go buy an HP or a Brother printer because this one is just not worth it. Read more

Date:Reviewed in the United States on October 31, 2018

Review:We are both teachers and print a ton from home regularly. This printer has quality generic toner for a good price that actually works well..... No need to replace a drum for a very long time (48,000 prints for each color) . The only bummer is that I cannot find the color drums from anyone but xerox.... and they are $89 a piece. Since you get them in the new printer for $240 for a whole new printer.... that means when we hit that time to replace even just one drum we will just buy a new printer. Unless we can find the drum cheaper. The drivers for this are okay, nothing special. AirPrint works well, but Google Cloud print is less reliable. Duplex works great and it almost never jams. Cant figure out how to do card stock and not get it to curl Also the paper tray is really small..... I have to fill this nightly and our brother b/w holds a whole ream... but overall a quality printer for those who need to print medium to large volumes of prints from home Read more

Review:Product itself is good and works great. I rated three stars only because it took much longer than expected to arrive. There were supposed to be 3 in stock when the order was placed but it ended up getting backorderd and we had to go to the printers several times. We could have ordered elsewhere and saved the hassle. Read more

Review:The printing is good quality. We have another Xerox printer, basically the same model but with scanning capability and i really like the quality of product. But I didn't need another scanner and I did need the automatic duplexng. The specs on this printer state this one is an automatic duplexer but it doesn't perform. Read more

Review:Great cheque printer. I had some issues using SAGE accounting software with this printer. Most of the issues went away when I changed a few printer settings. Read more

Review:Fast printing, great quality. Only wish they had a manual off switch to cut power to it and not just a power button. Read more

Review:The first printer had problems right out of the box, but after getting a replacement it is now working perfectly. :) It prints great quality full page graphics with some minor tweaking. Read more