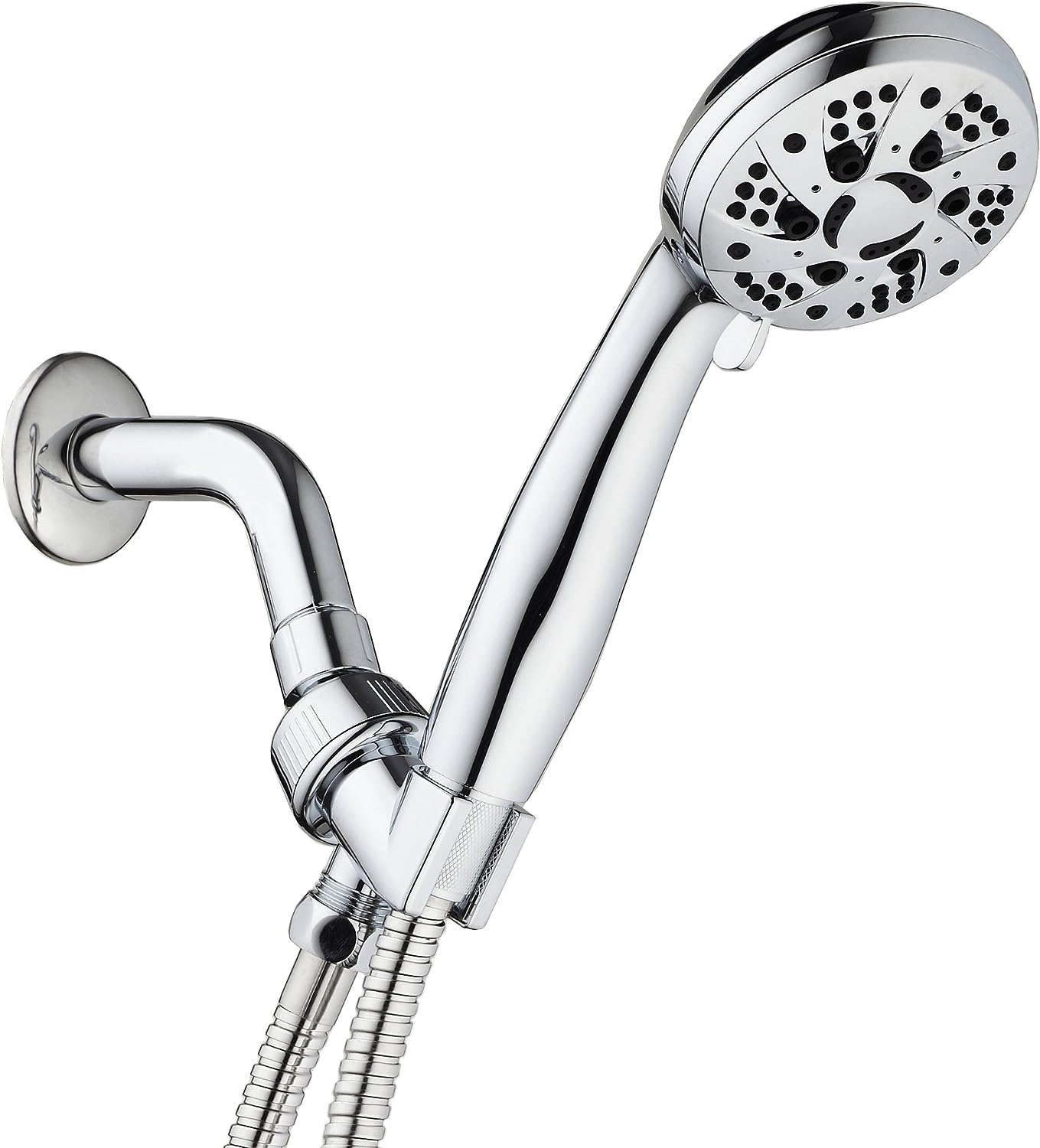 Date:Reviewed in the United States on July 7, 2017

Review:I have purchased/installed/used two of these shower heads. I would highly recommend them to anyone that is interested. BACKSTORY: I'm currently renting a new place and I found myself really missing the shower head with a hose from my old home. However, since I'm renting, I didn't want to spend a lot of fixtures. Since this one has a decent price and good reviews, I bought one for my bathroom. Within two days, everyone in the house was fighting over the shower with this in it. I ended up buying a second one within a week. Here is what I noticed: PROS: - It looks nice (nicer than I expected for the price). - It came with clear/easy instructions for installation. - The installation was a breeze. It took maybe 3 minutes and didn't require a single tool. - I was worried I might not have enough water pressure for this to work well, but that was not the case. It works very well regardless of the setting. In fact, on some of the settings it actually seems to amplify the water pressure. - It is very easy to get the shower head in/out of the mount. - It is easy to change the settings. - Although it's not pictured, I was able to put my hanging shower caddy back up and the hose/mount doesn't interfere at all. - After about two weeks of multiple uses daily, it is holding up great. CONS: - I'm really stretching to find a con on this one. The only thing that comes to mind is that when I opened the box and picked it up for the first time, I noticed that it was made of a pretty lightweight plastic. That made me question whether it was going to be a quality product. After using it the first time, that concern was relieved right away. This is every bit as good as the more expensive ones I've purchased in the past. UPDATE: After 4 months of daily use, both of these are still holding up great. We still love them as much as we did the first day. Read more

Date:Reviewed in the United States on November 15, 2017

Review:Your browser does not support HTML5 video. I've been using this for less than two months and it has split somewhere in the hose and leaks water everywhere. I bought this replacement hose: https://smile.amazon.com/gp/product/B01B8VXEWA/ref=oh_aui_search_detailpage?ie=UTF8&psc=1 That one split after a couple months as well... now I am on hose 3: https://smile.amazon.com/gp/product/B004XHYNEK/ref=oh_aui_search_detailpage?ie=UTF8&psc=1 This product ended up costing more, my recommendation is to not get the cheapest (like I did) it will end up costing you more money in the long run. Read more

Date:Reviewed in the United States on January 15, 2018

Date:Reviewed in the United States on October 17, 2017

Review:At first I thought this was a good shower head for the price. It has good water settings and easy setup, but I was wrong about the quality. It is poorly made, or I got a dud. After only a month and a half of use, the water started dripping out from the hose and it's a lot. To the point where the pressure coming out is very poor. I want either my money back or a new one free of charge. See the pictures. Read more

Review:Product arrived boxed and not in an awful blister pack, joy! Appearance, a nice shiny plastic chrome. First job, remove any flow restrictors. Get yourself a pair of needle nose pliers and yank out two pieces at the shower head end. Optional: remove wire filter/screen at the other end. Installation was simple. The product included all necessary washers and a mini roll of Teflon tape. Follow the included instructions for a hassle free and leak free install. In use, simple to use the different modes are easily selected. I have relatively low water pressure but with those restrictors removed I have enjoyed some nice neck and back water massages. Bonus: Now I have a hand held unit rinsing and washing a dog in the bath tub is a whole lot easier too! Recommended. Read more

Review:After only 3 months the hose cracked and started leaking close to where the hose connects to the shower head. Read more

Date:Reviewed in the United States on November 3, 2016

Review:I got this item in a lightning deal for $15. First of all, assembly took 5 minutes. Secondly, remove the entire flow restrictor from the inside of the base of the handle. This item works much better with a strong flow of water. For some reason, they have to put them in items like this, it's perfectly normal to remove the water flow restrictor. Hand tighten!!!!!!! Do not use any tools!!!!!!! The only tool you need is needle nose pliers to pull out all three parts of the flow restrictor. Mine rocks. No drips, absolute quality hose and handle. Very impressive highly polished gleaming chrome finish. I love it. Something of this quality at any brick and mortar store would be at least $40. Amazon, Thanx for the lightning deal!!!!!!!!!!! What a bargain!!!!!!! Jack Read more

Review:Very easy to install and that’s coming from someone who hates installing things. Takes a few minutes and you’re done. The only issue I had was why it was leaking after and I found I just had to press the thick washer down to be more flat. After that it was fine. Tested it out for the first time and I got way too excited. Had been using a broken one for so long that I didn’t knew what it felt like to have a good detachable shower head anymore. Definitely recommend! It comes with 5 or 6 settings I think. I like most of them especially the massage setting it is so good for sore muscles. I don’t prefer the water saving one as it’s way too little water that it wouldn’t remove any soap or anything. There is another lighter setting that doesn’t use as much water. First use and so far so good! Read more

Review:After fighting with this item for a few hours I could not stop the leaking between the adapter and wall pipe. I was sent a replacement and that one leaks as well. Tried with Teflon tape and without, cleaned pipe with wire brush but it still leaks. This was for my wife's shower so replaced mine with a well known brand and installed in less than half hour and works perfect with no leaks whereas the Aquadance is still leaking. Not happy with this product. Read more