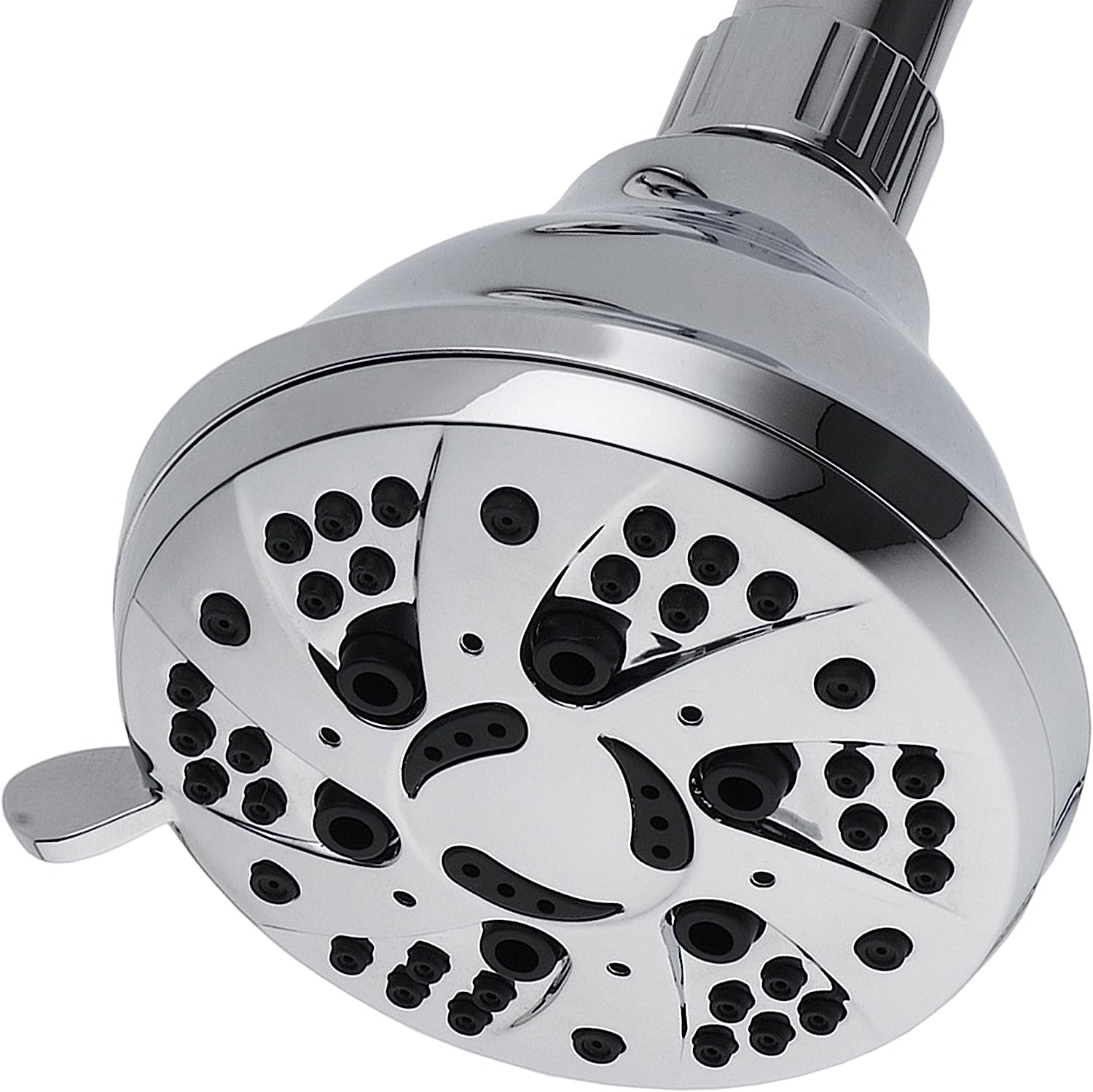 Date:Reviewed in the United States on October 14, 2016

Review:We just moved into a new house. The water pressure isn't great but the current shower heads were horrible. We installed this right when it arrived (on time per expectations set!!!!). It was easy to install and came with the white plumbers tape for installing, which saved a trip to the store. It works great with our low water pressure on each setting. I pinky swear I'm not a robot and I actually do love the shower head. Great buy for the money... for sure!!! Happy showering! Read more

Date:Reviewed in the United States on January 14, 2018

Review:First of all, let's get this out of the way -- I'm a showerholic. To me, relaxing under a full flowing shower after a hard day (or not) is one of the supreme luxuries of life. It's worth almost any amount of money to get it right, and I've spent probably far more than most trying to do so. Additionally, like most people, I tend to end up living where water pressure is either restricted or, at times, almost non-existent. Which makes getting a really good shower tough. Tough, but not impossible. When my last, great, shower setup (https://www.amazon.com/gp/product/B000UDBDK8/ref=oh_aui_search_detailpage?ie=UTF8&psc=1 ) finally gave up the ghost after 7 years (a great showing given how many chemicals and crap is in the water I used) my first thought was to just replace it with the same. However, this particular shower head was on flash sale for $8 or so, and seemed like a no-brainer given the alternative was four times as much (I use dual shower heads). At the same time I also bought this - https://www.amazon.com/gp/product/B00Y71VXP4/ref=oh_aui_search_detailpage?ie=UTF8&psc=1. This was about 4x the cost (around $32) but so highly rated I thought I'd at least try it side by side and see which one was better. After about a week I ended up ordering another of the $32 shower head, and removing the AquaDance. I'm not going to return it -- it may end up in our guest bathroom one day when that showerhead goes to the great waterworks in the sky. But it could not compare to the comfort and quality of the more pricey one, something that was easy to tell when they were installed side-by-side. Still, it's a very good unit, and the price (currently 1/3 the cost of the better head) plays an important part in the rating (if the price was even $5 higher my rating would drop to 3 stars). For those on a budget who really can't justify spending the extra it's not a bad choice (and made here in the USA, unlike the other unit made in China). Both of the heads perform superbly even with low water pressure -- as a rule I always remove the water restriction thingee most of these put in to deal with regulations and such, but in neither case did I have to do it, and the water was just fine. It's nowhere near as big as the other one I ended up using, which means the water can't spread out nearly as much. This along with the fact there is no "rainwater" setting like I like (there is a needlenose one, but nothing that just gives you a pure flush of nice gentle rain) means it's not the showerhead for me. But for you, particularly if it goes on sale again, it might be just right. If you want to see the perfect shower (for me, not necessarily for you) you might want to look at my review of the other shower head, where I also talk about the other item needed to create a two-headed shower that will create an experience you will not soon forget (nor ever want to leave that tiled nivana). Read more

Date:Reviewed in the United States on September 16, 2018

Review:Our old shower head was your typical run of the mill, non-eco-friendly, hippie-hating, water wasting, contractor bulk purchased cheap-o shower head. And let me tell you what - it got the job done for 30+ years. It let plenty of water flow through it, to douse you with a torrential downpour of clean water, nearly hard enough to knock you through the glass shower door or pierce your body with thousands of rain shards. Soap bubbles in your hair or stuck on your ape-like body - forget it. The old beast would rinse you off without batting a...drop? She was like the washing machines of old - prior to the High Efficiency garbage they sell now - the ones that actually cleaned your clothes, and didn't just spritz them with water, stir them and call them clean. This beast doused you till you were clean. Anyways, the beast lived it's life well, and it was time for it to go to the pasture. Don't tell our kids we threw it away, they still think it's hooked to a shower in a field somewhere helping goats bath. Based on Amazon reviews, we decided to go with this shower head. The shower head gets an A+ on looks. She's shiny and purdy. But honestly, who cares when her job is to douse you with water to rinse you off. 6 shower head settings - meh. More like 3, with a mediocre combination of the others. The three settings could be summed up into 1 decent setting, and 2 so-so 'massage - like' settings. I'd just stick with the general spray setting designed to rinse you off. 3-5 stars on this one. Water pressure. Sure it's high pretty high, in needle-like streams. But you need to focus on the 2.5 gpm. That's gallons per minute, and equates to 2 cups every 3 seconds poured on you. This won't do the job the 30 year old Titan of a showerhead I had did, day in and out, for a long long life. That beast would douse you with I'm guessing 5 gallons per second. It would make you fear for your life if you took longer than 3 minutes to shower. This Nancy of a showerhead daintily wishes you well for the 30 minutes it takes to get all the soap off of you after you lather up to get clean. Even if you take the water restriction device out, you still don't get serious water flow. Pressure- yes, but water flow, no. 3-5 stars for this guy. I will clarify, that this is something no shower head made now can get beyond, unless you open her up and get rid of the water restrictive devices in them. But from what I've researched, it's difficult to find a showerhead like days of old, that would actually feel like you were standing under niagra falls, and not under a giant umbrella with pin-holes in it, while standing out in the rain. Apparently 2.5 gpm is a government standard now, and like all things government run, it's screwed up. The flow rate was implemented, I'm assuming, to save water by using less water per shower. But like all things thought up by our Government - you now have to take twice as long showers to rinse all the soap off, in-turn, wasting the same amount of water and wasting more time than before...Thanks Government! Seriously, all this water conservation garbage we are forced to use is backwards...We have to wash our clothes twice to get clean, wasting more water and electricity. We have to flush our toilets twice or more to get the crap down the drain (especially if you have massive bowel issues like my children) since low-flow toilets were mandated. We have to spend an hour in the shower to wash, since we can't get a decent flow rate. Don't get me started on the amount of gasoline I spill with my spill proof government mandated gas cans... Anyways, overall, for what it's worth, this showerhead gets a 3 out of 5. I'd give it higher, but I don't think any deserve higher unless they can get a higher flow rate to them. Read more

Date:Reviewed in the United States on September 19, 2016

Review:This is a great showerhead! Out of all of them I looked at I am thankful I bought this one because it was very simple to install with zero problems and has several great settings to choose from. In fact, I keep changing it up when I'm in the shower because they're all really cool. My favorite would have to be the one that blends two of the options for a nice full experience... makes me wanna dance! Read more