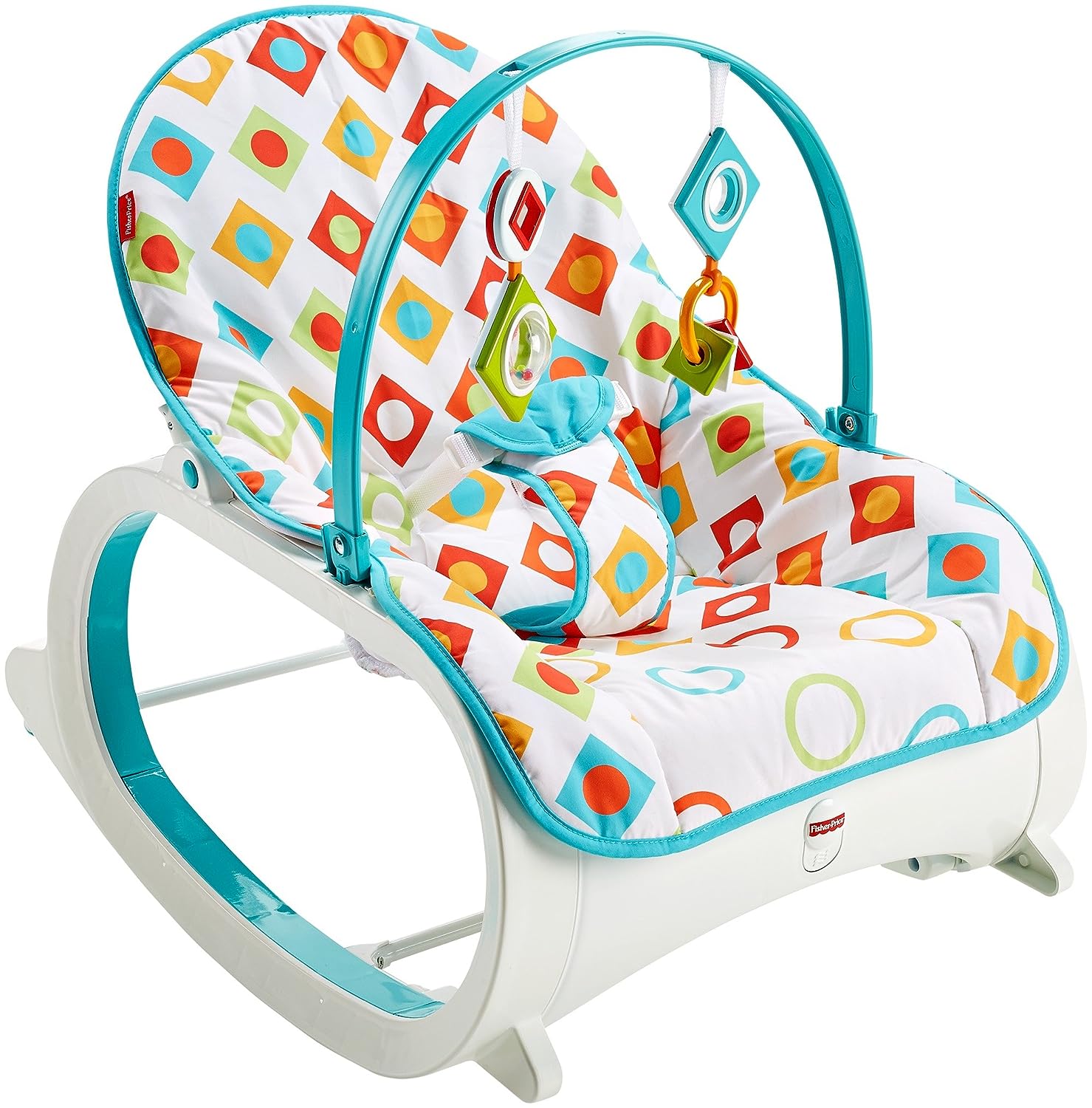 Cost Break Down
Style: Colorful Diamonds Product Description The Fisher-Price Infant-to-Toddler Rocker starts out as a stationary infant seat or rocker with bat-at toys overhead for play time. Then, as your baby grows, you can easily remove the toy bar and convert it to a toddler chair for children up to 40 lb (18 kg). Brand Story By Fisher Price

Style: Colorful Diamonds Product Description The Fisher-Price Infant-to-Toddler Rocker starts out as a stationary infant seat or rocker with bat-at toys overhead for play time. Then, as your baby grows, you can easily remove the toy bar and convert it to a toddler chair for children up to 40 lb (18 kg). Brand Story By Fisher Price

Date:Reviewed in the United States on October 8, 2018

Review:I got this rocker and another similar model for my twins. We used them daily from birth until about 6 months. They napped in them, took bottles in them, and generally hung out in them a lot. I could rock one chair with one foot and the other chair with the other foot, which would often soothe my babies to sleep. They were lifesavers. At about 6 months, when my girls could push to sitting, the chairs became hazardous. They could sit forward far enough to tip them, so we first placed them up against a couch so they couldn't tip, and then stopped using them entirely. At 14months both babies are strong walkers, so we have brought the chairs out of storage, strapped the seatbelts out of the way (they tuck under the seat for toddlers) and begun using them again. The girls can climb into and out of the chairs by themselves and enjoy being able to rock themselves back and forth, although they do not tend to sit still in them. At 16months they do sit in the chairs with a sippy cup and a board book and chill out for a while, and it's just about the cutest thing in the world. These chairs have seen an epic amount of spitup, a few blowouts, a heavy layer of dust from storage, and now dirty shoe marks, but the cover goes through the wash like a champ and there is no visible wear. To compare this to other infant-to-toddler rockers: the portable (fold up) one with the frog design and the swing-away toy bar got mangled the first time it was washed. The jungle themed one with metal pole construction is functionally identical, except for different toys on the toy bar and the vibration on that one doesn't have an auto off timer. This one does have an auto off timer, but I think that the vibration is not as strong. Overall a great product, but the period where it can't be used safely knocks off a star. I wish there were a way to make this product safe for ages 6-12mo but honestly at that age they're so wiggly and just want freedom to learn to crawl and stand. Update: At 3.5 years we're sadly saying goodbye to these chairs as my larger twin has passed the weight limit. As preschoolers my kids have used these chairs daily for TV watching or "reading" time. They're still in great condition, though, so we'll be passing them on to other families with new additions. Read more

Date:Reviewed in the United States on November 17, 2018

Review:It is not safe for my 8 month old Maybe this needs shoulder straps Baby is always hanging to the side or forward I think it needs more fabric to make it deeper Read more

Date:Reviewed in the United States on December 8, 2016

Review:Changing my review. It is cute and roomie for a little one but if your child can sit up and move they will tip over. My 6 1/2 mo rocked forward onto his stomach and face. This is not safe Read more

Review:My newborn sleeps all day on this! I love it Read more

Date:Reviewed in the United States on February 14, 2017

Review:I like this better than my Mamaroo that I paid over $200 for. My 5 and 3 year olds love it too! I especially like that there is no hard plastic backing behind the cushion like there is in the Fisher Price Rock N' Play. This won't deform your baby's head. I was constantly stubbing my toes on my other bouncer, but I don't have that issue with this one. Perfect little rocker. Read more

Date:Reviewed in the United States on December 4, 2017

Review:We love this chair. Our four month old does too. He can sit up in it, lay down and play. It rocks and vibrates so that is a big plus. It is easy to set up, even though the instructions are kind of confusing. It is nice to have a product for children who are a bit bigger than usual. Our four month old is almost 19 lbs so having this chair with the weight limit is great. We’ve been looking at other products too, but are glad that we have bought this chair instead. Read more

Date:Reviewed in the United States on February 2, 2018

Review:Love this chair. I have 4 for my twins. I have 2 at my house and 2 at my mother's house because she watches them. That's how much they like them. The toys that hang over the chair are removable which was good because they had no interest in them at first. Now, at 3-months, they like to try to reach for the toys and get excited when they actually can. This is good for working their gross motor skills. this design is a good neutral design and can be used for either gender. I love that it can be used even as they get older. I couldn't decide between this chair or the older version. The older version looks like it rocks better but this version has a deeper seat which is better for holding the child and better as the child gets older. Read more

Date:Reviewed in the United States on March 2, 2017

Review:My baby loves this chair! We got it because she was getting a little too big for her rock n play and the little bassinet I used to put her in when I'd shower. I take this chair into the bathroom now while I shower and she plays with the toys happily the whole time. Oftentimes she will also put herself to sleep, especially if I turn on the vibrations! It's a really cute little chair and she'll get a lot of use out of this. I like that it turns into a little rocking chair for when she's bigger. Read more

Review:I have been meaning to write this for months now, just busy with 2 lo's; I originally wrote a good review of this, this was before actually using it, as we received it good timing, and it seemed great, we had another one previously for our now 3yo, we started to use this a couple months after originally purchasing it as baby was too small for it, within weeks of using it one of the clips that hold the seat fabric to the base started to pop out...all of the time, we have continued to use this but we are continuously snapping it back in, we are afraid that as she gets older/bigger, it may start to pop others out or not hold her in, she is only 18lbs now, so hopefully it holds, but we are disappointed with this one. Read more

Review:We purchased this for our granddaughter , and it’s been very useful and occupied her while we have dinner etc, she used to fall asleep in it , she enjoyed it . When she was a few months old the toys almost hit her face and they are quite hard toys , actually too hard for babies in my opinion , that’s why I gave it four stars instead of five . I like that you can rock it or put the kick stand on. Read more