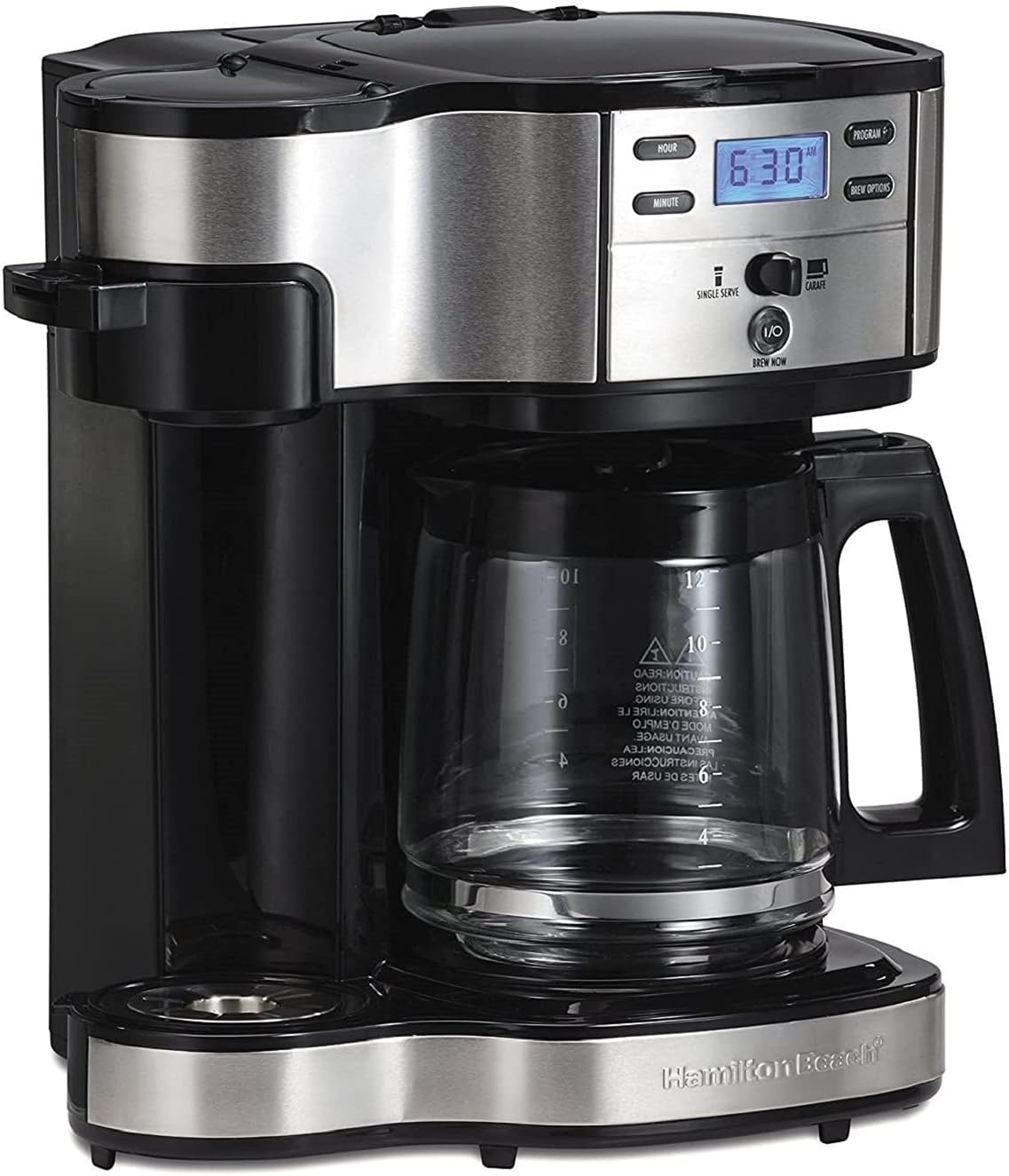 Add to whishlist
Share:
Cost Break Down
About this item This fits your . Make sure this fits by entering your model number. P.when("ReplacementPartsBulletLoader").execute(function(module){ module.initializeDPX(); }) 2 WAYS TO BREW: SINGLE CUP OR FULL POT. Brew a single-serve cup or a full pot of coffee with your favorite ground coffee. Whichever way you brew, the Hamilton Beach Programmable Coffee Maker makes it easy to do both. Not compatible with K-Cup pods SIMPLE SINGLE-CUP BREWING — DOESN'T USE K-CUP PODS. Brew a cup for one using loose ground coffee (not compatible with K-Cup pods). With the included mesh scoop, adding your favorite ground coffee couldn’t be easier: just scoop, place and brew PEACE OF MIND WITH 2 HOUR AUTOMATIC SHUTOFF. How many times have you walked out the door, only to wonder: did I turn the coffee maker off. Now there's no worry or turning around to check, since the coffee maker turns off automatically after 2 hours PROGRAMMABLE FOR WAKE-UP READY COFFEE. Program the Hamilton Beach coffee maker with the time you want to start brewing, fill with water and add ground coffee. When you wake up, coffee will be hot and ready to drink. Not compatible with K-Cup pod CHOOSE YOUR BREW STRENGTH WITH SELECT-A-BREW. Control how strong you want your coffee with two brew options: regular and bold. Choose Regular for standard medium-grind coffee, or go Bold for decaf, finer grind or a premium roast brand for richer flavor USE YOUR FAVORITE TRAVEL CUP OR MUG. Mugs not included "Pod Basket" is not included.

Review:I wanted to wait until I had used this for awhile before writing a review, i didn't realize I had waited almost 3 full years! I bought it in Nov 2017 and it is a workhorse! I brew 2-3 full pots a day (large family, all coffee drinkers... don't judge!), plus to go cup a few times a week. To address some of the negative comments I read while looking at this particular maker: Once I realized it requires fewer coffee grounds than my old maker, the coffee was great! This gets the water really hot which gives a strong coffee, so if you like weaker coffee, try using fewer grounds. As for it "spilling water everywhere" complaints.... pour slowly. I only make a mess when I am in a hurry. Again, I have been using this daily for 3 years and it is by far the best coffee maker I have ever owned. Don't hesitate, worth every penny! Read more

Review:We have had this coffee pot for less than a year. It's a great looking machine and I don't mind it being on my counter. In theory, it's also great for those times when you need a single cup vs. a pot. We found right away that the cup side was not for us. Perhaps it is the coffee we use (Costco brand) or the fact that it's a mesh filter, our coffee had a very dark later at the bottom of our cup and it really did taste dirty. Maybe there are paper filters for single cup, but we stopped using it altogether. The pot portion was just fine, as well, however, we had to clean this with vinegar more frequently than any pot I've ever had simply to get it to make a full pot within the two hours that the warmer stayed on. In fact, currently, we program it to start brewing at 4:30am so that when I get up at 5:30 am, I can have a cup of coffee. (It's at between 4-6 cups at that point.) NOBODY has time for that. It is also leaving two cups in the holding tank which won't come out. It's terrible and our new Bunn is coming tomorrow. Goodbye Hamilton Beach pot, we will not miss you. Read more

Review:The glass carafe broke near the handles on the first brew without any coffee grounds used. Second use the sides of the glass where nothing is touching started cracking. Read more

Review:This is by far the worst coffee maker we have ever purchased. After a month, the coffee still has a plastic taste. The manufacturer has recommendations on running through vinegar to remove the taste, so it's obviously an ongoing problem. It didn't work. Why not solve the problem before the consumer gets the product instead of them having to deal with it. Also, it brews single serve cups painfully slowly. We bought a Keurig and went back to that. Never a funny after taste, even right out of the box. Read more

Date:Reviewed in the United States on October 16, 2019

Review:Okay, I was a little skeptical about this coffee pot because I've had some pretty sore experiences with HB products. This did not disappoint. The coffee pot is the coolest part. Notice when you pour coffee and it escapes the ending of the pot and it's all over the place? This coffee pot actually has a part in there that slows down the flow and keeps that from happening. The basket for the coffee filter is deep which avoids it overflowing and getting coffee grounds all over the place too. The to-go part is neat but not my favorite part. The little mesh basket that comes with it must be cleaned after each use. There will be coffee grounds everywhere in that thing and it gets in your coffee sometimes. ( see picture) Very easy to use and to clean though. The only thing I dont like about this pot is you cannot program both of them at the same time. Its either the Pot side or the to- go side. Read more

Review:Well it lasted exactly 7 months. I purchased on December 21, 2017 and this morning it made it's last pot. Now it just won't brew. I loved this coffee maker, but I guess I expect a product to last longer than 7 stinking months. Not impressed. I'll update this review if I have any luck getting Hamilton Beach to stand by their product and replace it. If you're not seeing an update, they didn't care that they make products that can't even make it through the first year of normal use. UPDATE 7/30/2018: I did contact Hamilton Beach and based on previous reviewers I was very concerned they would make me pay money to return the broken coffee maker. I was pleasantly surprised that they opted to allow me to remove the cord as they described to make it safe for disposal and I just received the replacement maker today. I'm still a little concerned it might not last like I hope, but hoping all the negative reviews has prompted them to improve. I'll update this review if it ends up lasting or if it dies again like the first one. But for now I've upgraded from 1 to 3 stars b/c they did come through sending me a replacement without costing me extra money or effort. Read more

Review:I like the single cup option and having a pot for when I have company. The coffee is hotter than my Keurig. Read more

Review:Coffee is Luke warm and the warmer doesn’t work much better. Would not recommend Read more