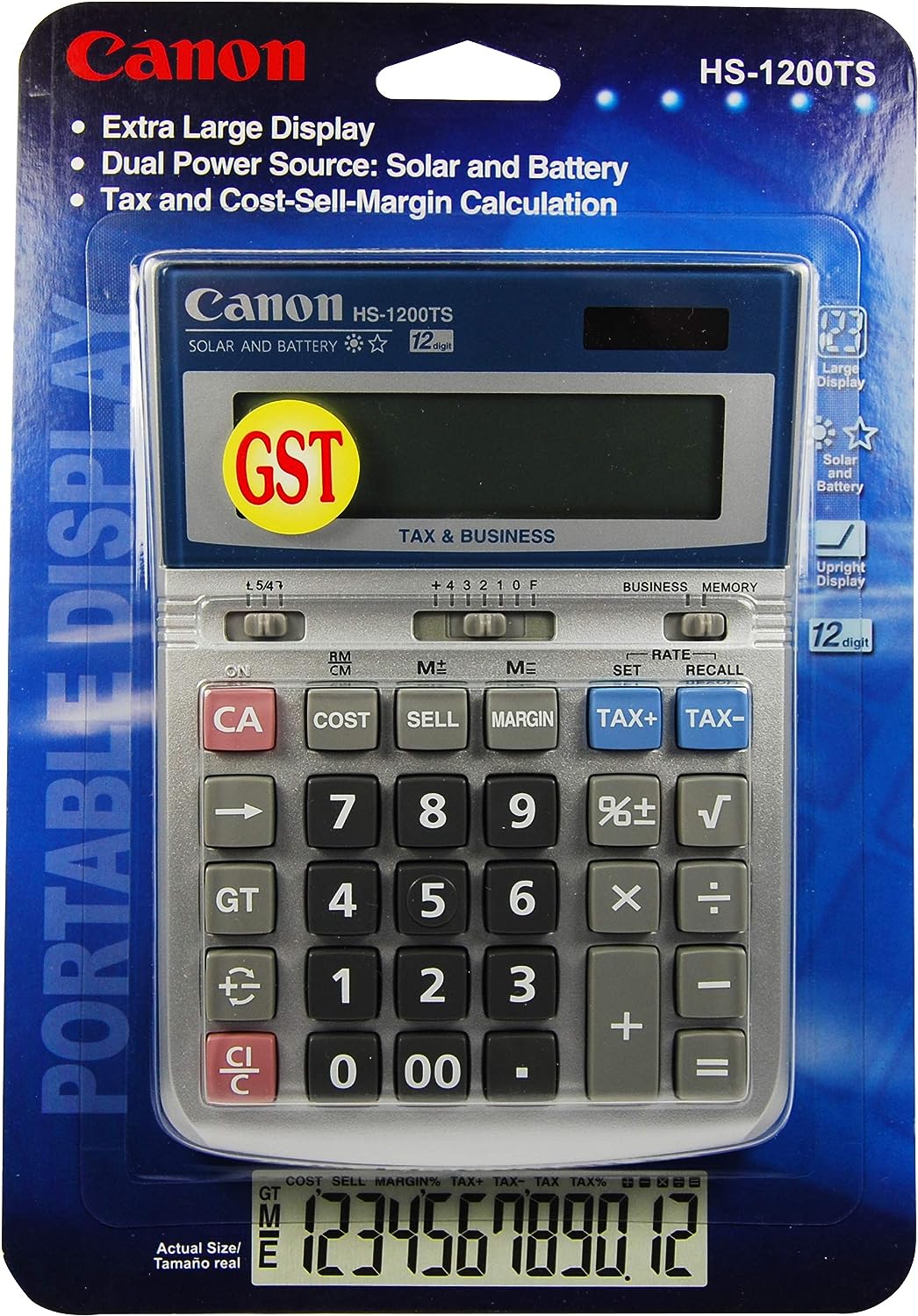 The Canon HS-1200TS may be small in terms of dimensions, but this portable desktop calculator is enhanced with many sophisticated features. The 12-digit, upright angled, liquid crystal display provides large, easy-to-read numbers for maximum viewing comfort. The display indicates the operation symbol (+, -, x, ÷) during a calculation and will also show the equals sign (=) when your result is displayed. The high-quality keys on the HS-1200TS incorporate a "PC-like" keyboard touch to help confirm data entry with every press of a key. This enhanced accuracy will assist you when calculating important business and sales numbers such as the cost, selling price or the desired profit margin of an item.

The Canon HS-1200TS may be small in terms of dimensions, but this portable desktop calculator is enhanced with many sophisticated features. The 12-digit, upright angled, liquid crystal display provides large, easy-to-read numbers for maximum viewing comfort. The display indicates the operation symbol (+, -, x, ÷) during a calculation and will also show the equals sign (=) when your result is displayed. The high-quality keys on the HS-1200TS incorporate a "PC-like" keyboard touch to help confirm data entry with every press of a key. This enhanced accuracy will assist you when calculating important business and sales numbers such as the cost, selling price or the desired profit margin of an item.

Date:Reviewed in the United States on December 5, 2018

Review:A basic rule in mathematics is that one rounds up at a place value of five or more, down if four or less. This "calculator" rounds EVERYTHING up. 6÷28 set to four decimal places results in 0.2143. Set to three, 0.215, set to one, 0.3, and set to no decimals it claims the answer is 1. With such a basic error in programming, one any sixth-grader should easily catch, one has to wonder what other mistakes are being made. Canon may make decent printers and cameras, but I will never buy another calculator made by Canon! Addendum: Six months later the calculator will not turn on despite hours in direct sunlight. Not only doesn't follow rules of math, it is physically junk. Read more

Date:Reviewed in the United States on November 22, 2015

Review:A friend said calculators are an anachronism. Why of course they are. So are electric typewriters and rotary dial land lines. I guess my 1911 crank phone that still receives calls is too. When you need to add up debits and credits in a checkbook or some other mundane arithmetic or even mathematical calculation, there is little better than a calculator and this Canon HS-1200TS if far more superior than any calculation I will ever need now. Just think that this little number cruncher will out do almost any old timey calculator at far less weight and considerably faster. I only wish I saved my Friden Rotary chuchanga-chuchanga, put on the ear plugs calculator. My desktop weighs less than it did. Long gone is my Comptometer and I miss its doorstop capabilities. My last Canon calculator did not have the multiple functions and did not have the decimal capacity either: however, it just wore out from use. This new Canon has the solar battery and meaningful functions. Frankly, many of those capabilities are of little value if the keyboard does not respond properly to a user or the amount of time is too long. Canon is perfect in this area as well as providing me with a fantastic handheld calculator. Even though the full universe of calculations resides in my desktop, I seldom use its abilities since the Canon is handy. Read more

Date:Reviewed in the United States on March 9, 2017

Review:My dad was struggling with his small calculator and not being able see or hit the numbers properly. I read other reviews and was impressed with the feedback so I purchased this for him. He has been so happy with it and doesn't have mathematical errors anymore when he balances his checkbook. The numbers are large and clearly visible with large key pads. Read more

Review:I love this calculator. Owned many over the years but nothing beats this little rascal. No batteries to change, totally solar but still with an internal battery inside. Could not believe the ease of using all the functions. Even has a built in tax + and a tax - minus auto built in. Love the buttons as absolutely no pressure is required to push them, almost like waving your finger over the keys. The real beauty of this calculator is the ability to enter up to 12 digit viewing screen with auto punctuations, commas, periods once you set the decimal point to your liking. The tax key alone is worth the cheap price of this beauty. It's amazing. For example, hit the tax + plus key, enter the amount of tax in your area, and hit the tax plus + key again. The tax function is programmed forever. So simple. All memory functions are built in. The size of this calculator is perfect for desk top use. Gone are the cheap looking black plastic models. This unit is very light weight, colorful and features a tremendous viewing screen set at a slight angel. Very large keys for a mans hands. Widely spaced no clutter. The unit has two built in front rubber pads to prevent slippage. I keep my unit on a shelf with little light without any solar charging problems from the built in top mounted solar screen. This calculator is worth 5 times what I paid for it. It's a keeper. Read more

Date:Reviewed in the United States on February 25, 2020

Review:*(Revised from earlier review) Keeps dropping input number. Mostly number “1” Has progressively gotten worse and Ive only had it since January 2020! When tabulating a list of numbers I dont want to have to look up each time to make sure the number inputs correctly. Can easily throw off important calculations. Used for a hobby so I dont want to spend a lot of money. After this, maybe Ill have to anyway......... Not as good as I'd like. Has tendency to drop input number occasionally. Otherwise, larger than I thought, but that's fine. Read more

Date:Reviewed in the United States on August 7, 2014

Review:This is an excellent business calculator, and has features similar to printing adding machines. The switches to set the decimal, rounding, margin/memory modes are a huge upgrade to having to press toggle buttons. Having 12 digits is another upgrade over almost every other calculator on the market. The solar cell is pretty small, so hopefully the battery power will work for a while.The profit margin and grand total functions are new for me and they do make calculations much faster. I specifically bought this one for the tax feature and it's easy to set up and use. It's much bigger than similar calculators, but it's also pretty rugged, and can take some use. I've tried similar, cheaper models, and they last 3 months before the battery & solar cell die to the point of the display no longer working properly. This model, while a few dollars more, is definitely worth it. I hope to get years of use out of this calculator. Read more

Review:The design was exactly what I wanted. I needed something to replace the calculator I have used for the past 10+ years, and the layout of this calculator is very similar to my old one. Unfortunately after spending about 4 months on my desk and being used maybe a dozen times, it will no longer power on. It may just need a new battery, but I've never had a calculator battery die that quickly. I barely ever used it. It's supposed to also be solar powered. I have tried using it in direct sunlight and even giving it time to charge. It will not power on at all. EDIT: Works after buying a replacement battery. Probably just old stock. This is still a worthwhile purchase, even with the extra couple of bucks tacked on for a battery. Read more

Date:Reviewed in the United Kingdom on February 20, 2018

Date:Reviewed in the United Kingdom on April 5, 2018

Review:good quality and buttons nice size over all like it and so good buy Read more

Review:Though this item was shipped from US but it reached on time. I love this product and its Genuine. Thanks Read more