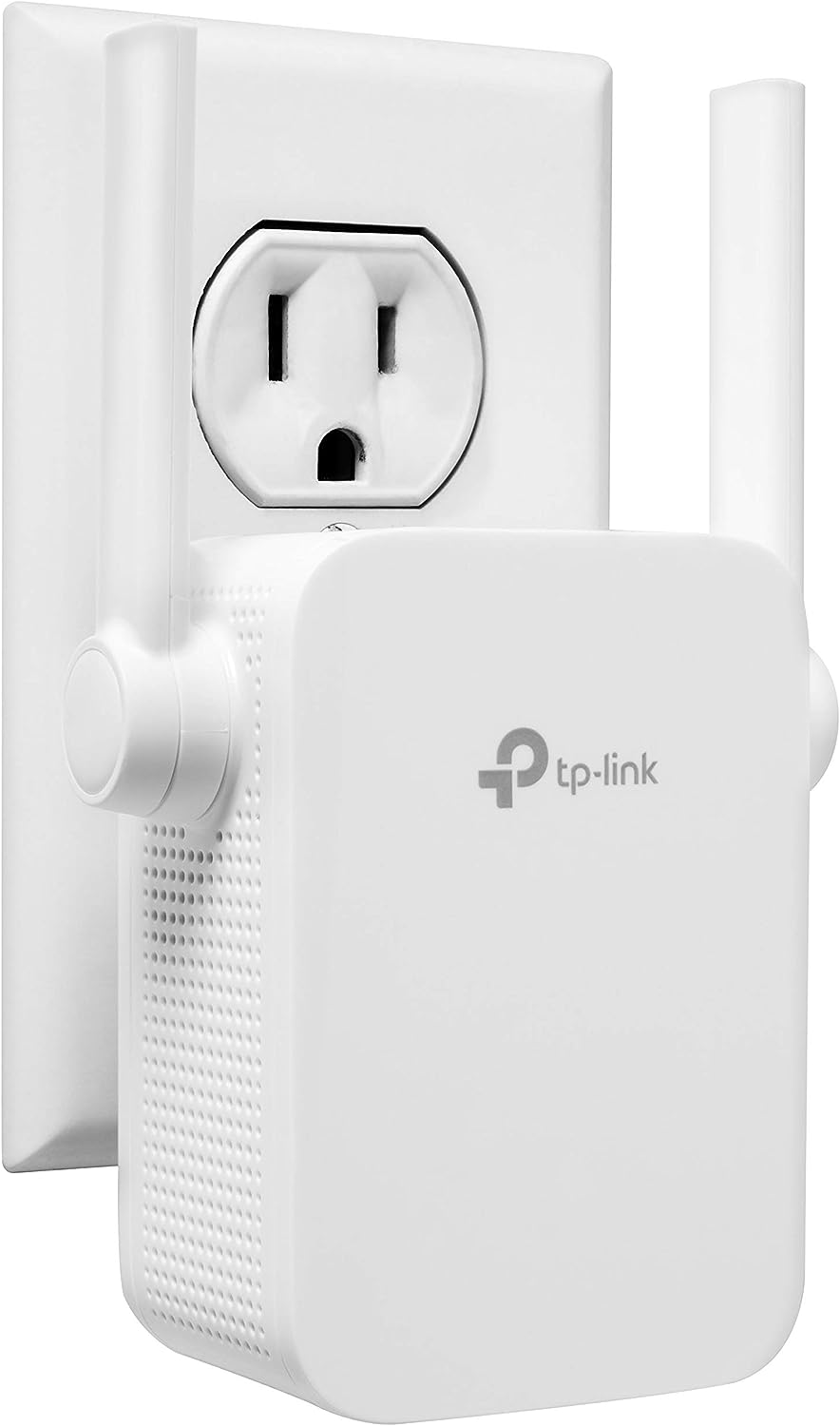 Model: WiFi Extender- N300 Despite its compact size, it may be hard to ignore the TL-WA855RE due to the truly impressive way that it projects WiFi access into the areas of your home that your standard router simply cannot reach. The TL-WA855RE WiFi booster supports wireless speeds of up to 300Mbps and keeps all of your favorite devices running as fast as possible.

Review:This is by far the best WIFI extender I have ever used. I have a multi level house and wifi is challenging. Full signal in some parts of the house and in others,..there is none. I have tried MANY MANY wifi units similar to this. I'm very tech savvy and pride myself in figuring stuff out with out directions. However, that is very different with some wifi extenders. They are complicated to set up and do not work good at all. I had good luck with the TP-Link light sockets with the echo and setup was a breeze. So I decided to take one more shot at yet another wifi extender. Choosing the TP-Link in hopes it would work just as good. I really don't understand these other reviews that state how hard it is to set up. This wifi extender is truly easy to set up. This is what i did,....Quick instructions right on the side of the box. Plug in the TP-Link, close to your router, the green light flashes, press the WPS button on your router, then press the signal button on the extender. The green light flashes, goes solid green, goes solid red then after 5-10 seconds the light stays solid green. The unit is now paired with your router. Now, Unplug the extender, walk to a midway point in your house close to the dead spot and plug it back in. It will blink green again, then solid green, then solid red, 5-10 seconds it turns solid green. Open any device you want to use for wifi, go to wifi settings and find your wifi name. Except the word _EXT will be after the device name. So if your normal wifi is GOOBER616 for example. It would now show as GOOBER616_EXT, Choose the Ext one and enter your normal password for wifi, and BOOM, FULL wifi signal. I now have wifi in every room in the house. If you plug the unit in and the light stays on solid yellow? Then move it to another socket closer to the router. Hope this helps anyone who has or has had a problem. Read more

Review:I don't typically write Amazon reviews, but I feel this warrants one. My modem and router are kept downstairs, and my upstairs study is an almost complete dead zone, I'm lucky to get above 1-4 Mbps, while other rooms get 20-25 Mbps. I researched wifi range extenders, and this one seemed great for the price. It arrived a day earlier than planned, and after 5 minutes pairing it with my network, it was plugged in and working perfectly. My computers now average about 22-24 Mbps in my study, which has a huge effect on my productivity and general enthusiasm for life. A few notes: It does not have a cord, it plugs directly into an outlet like a nightlight It automatically creates a new network named yournetwork + "_EXT" It's smaller than I thought, about the size of 3 stacked packs of post-it notes If you use your internet everyday for school or work, slow speeds speeds can be detrimental. This completely fixed the issue for me. The most $20 has every improved my life. Other more expensive models probably have some features this doesn't, but if you just want to fix dead zones for not much money, this is the answer. Read more

Review:Oh man, I am over the moon about this product. My bedroom is the basement of the house, so the wifi just barely reached, and has a very weak signal. This extender is a life saver. It took maybe 2 minutes to set up, the hardest part was getting it out of the box! It amplifies the signal perfectly, and I find that it actually makes my wifi faster, as less people are using it! HouseWifi is my normal wifi signal in my room and the HouseWifi_EXT is the extenders wifi signal in my room. Look at the difference! I will be convincing my family to buy these for the farther parts of the house. In love!! Read more

Review:I needed a WiFi extended to provide a better Wifi signal to my Ring Doorbell. Unfortunately, the location of my router was too far from the Ring and the signal had to travel through too many walls, including the external brick wall. Because of the weak signal, I was having trouble answering rings and getting live views on my phone. I originally looked into purchasing the Ring brand Wifi extended, but it was 50 bucks and it was ONLY for Ring products. I thought it would help to have a Wifi extender to connect to all my other devices, so I scoured Amazon to find a cheaper one. I am technologically literate in many areas, but connectivity and networks are NOT one of those areas. I was concerned that I would have to hire a techy person to come help me, but surprisingly, it was very easy to set up and connect with my current AT&T Uverse router. I did run into a bit of a problem, as my Ring Doorbell was still showing a weak signal. I fiddled around with the Ring and realized that this extended had created a new network for me to connect to - it was my network name with "-EXT" at the end. I reconnected the Ring to THAT network - my password was the same and everything - and NOW my Ring Doorbell works PERFECT! This extender is great and does exactly what I need. I also noticed on the box that there is a phone number to call for 24/7 tech support, which is very handy to have! I highly recommend it if you just need a boost in signal to reach certain devices or reach devices that are too far away from your router. Read more

Review:I don't understand how the speed of the Internet after using this became 2mbps from 25mbps. After I switched it off speed became normal. I don't know whether the product is faulty or the product itself is like this. But still I don't see myself buying it again Read more

Review:This one was super easy to set up. Does the job well for my two-storey home, where the upstairs signal was too weak to do anything useful with. We keep it turned off and start it only when we go upstairs. It gets ready to serve in under a minute. You just have to know where to place the range extender. It should get reasonable signal itself first. A good solution is to plug it into a socket somewhere in the middle between the base router and the poor coverage area. I've had a D-link extender before this one, which was a nightmare to set up. It was complicated and I had to do a bunch of manual settings in order to get the desired result. It was even having an IP address conflict with the base router. What kind of poor design is that? I have a master's degree in computer science. I can't imagine what non-computer-sciency people would do. I'm pretty happy with this device. Giving it four stars, because I don't know how the range compares to others in the market. Read more

Review:Tplink n300 performance extender is waste of money. Pros:- 1. Easy to install. Cons:- 1. Wifi speed drops significantly. I use my main router on a second floor and i have 50Mbps plan. Even the weakest signal from my main router gives a speed of around 15-18mbps on first floor of my home. When I connect to this device, I only get a speed of 1.5 - 2 mbps at same spot.(extender was also installed at the same spot). 2. It also drops your wifi connection frequently. Even if only 1-2 devices are connected. I have experienced even in 1meter range of this device. Overall: product is not worth it. Read more