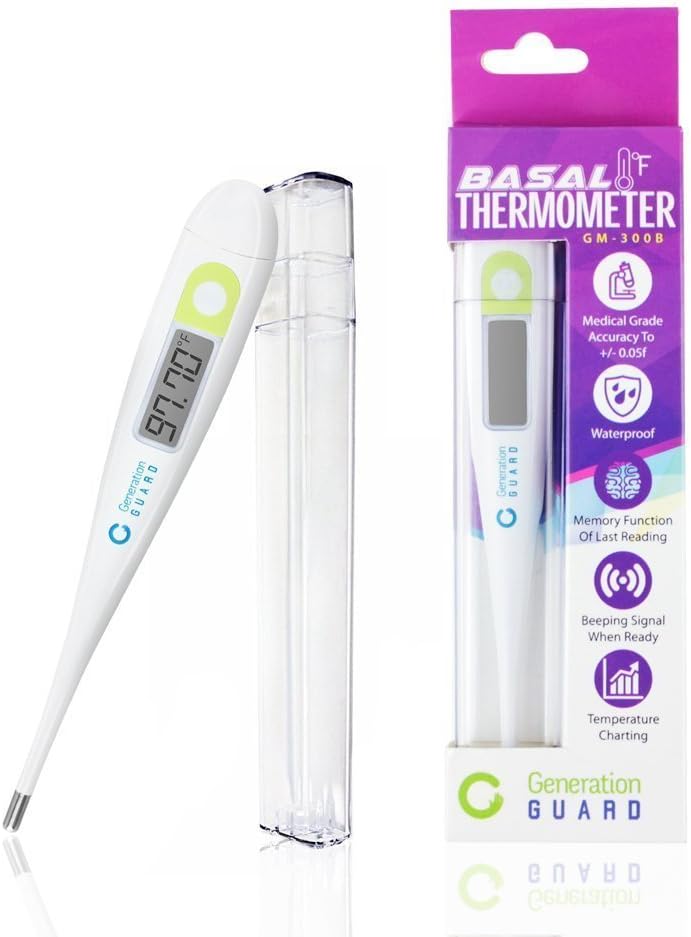 Date:Reviewed in the United States on October 18, 2016

Review:Super accurate and does exactly as advertised. I used this every day for 6 months while I waited on my $100 Wink thermometer to arrive. Once I received my super fancy thermometer, I compared the two to see if I got the same temperatures. This thermometer gave me the same exact temperature as the expensive one did, so I'm pretty happy with its accuracy. The beep is quiet and never woke my husband up. One minor inconvenience is that there is no backlight (although it doesn't claim to have one, so can't complain), which makes it hard to read in the morning. Edit to add - I just want to say that some of these bad reviews are ridiculous. You can't get the thermometer out of the case? Sounds like a personal problem. You're mad there is no backlight? Read the description before you buy, it doesn't state anywhere that it lights up. You're upset that you can't figure out how to get the memory feature to work? Read the instructions, it's actually pretty simple. Rant over. Read more

Date:Reviewed in the United States on February 27, 2017

Review:I love that it reads 1/100 to the degree. The beeps are loud enough to tell me it's done calculating (or wake me back up because I dozed off) but not wake my husband. Wish it was backlit, but you can't always win them all. Great for the price! Read more

Date:Reviewed in the United States on November 3, 2017

Review:This is my first BBT thermometer and is working as described. I researched quite a few before I decided on this one, primarily price and reviewed accuracy. It is a great price for a first time tracker like myself instead of an expensive one. After reading reviews of BBT thermometers, I thought I might have to wait forever for a reading, but was willing to do so for an accurate one, however this thermometer reads quicker than I expected! It comes with instructions and a clear case. After about a month of use, I can confirm is a good fit for my needs. I take my temperature at the same time early every morning, log it, then go back to sleep. The beep isn't loud or obnoxious at all which is a plus. Though if I were to purchase again, I may opt to get the backlight version of this thermometer, but really, saving a few dollars and using my phone to read it isn't a dealbreaker! UPDATE! Just wanted to update everyone who may be interested. This is still working great for me. The original battery did die quite early as I see others have had issue with, but I replaced it and have had zero issues since. Read more

Date:Reviewed in the United States on January 2, 2018

Review:This is the best BBT ever! I love that it stores my most recent temp so that I can log it in the mornings when I wake up! It is very accurate and helped me to pinpoint ovulation. I would highly recommend this to anyone looking to track ovulation! It does beep to let you know that it's done which I love because I set an alarm to temp and often fall back asleep! It wakes me back up but doesn't wake my husband and kids! Read more

Date:Reviewed in the United States on January 2, 2018

Review:I have had this for just a few months now....To be sincere it help me track my morning temperature but I am yet to figure out two things ie how to retrieve the last reading and now more recently how to charge what seems to be a low battery. Every time I switch it on it says Lo and switches off leaving a small dot on the screen. This is utterly frustrating since I want to try it before I move. Thankfully the seller explained to me what I was doing wrong. The thermometer works great Read more

Date:Reviewed in the United States on September 20, 2018

Review:Not a fan. The beep to start is very soft which is nice. But there's no beep when it's done taking your temp. So if there's no beep, and no back light you really have no idea when it's done. And since I'm using it to track fertility and you shouldn't really move around a lot unless youre able to look down the front of your nose with a bedroom light in your face you have no idea when it's done reading. It's a waste. I can't return it because I threw away the box assuming it would be a basic straight forward beep to start. Beep to finish. Disappointed. I also just checked it. I've used this twice, I've only had it under a week and the battery already says low. Really sucks that it comes like this. Read more

Review:I purchased this thermometer nearly three years ago (2016) and have been using it consistently since then. This helped me track my cycle and conceive baby #1. I also used it to track my cycle and prevent pregnancy after my baby was born, and now am using it to try to conceive a second child. This thermometer has always provided clear, accurate readings. I see that some of the negative reviews complain of short battery life. This has not been my experience but I purchased mine in 2016 and many of the poor reviews seem to be from 2018. Because this is a basal thermometer, it takes between 30 and 60 seconds to identify an accurate reading. I find it identifies a reading more quickly if I stay still while it is measuring my temp and push it as far back under my tongue as possible. If I could change anything about this device I would include a back light in the screen so that I could read it in the dark more easily. As far as I can tell, this doesn't remember my last reading, but I don't really need to as it is best to use an app to track temperature readings. Read more

Date:Reviewed in the United States on January 23, 2017

Review:Used this Lil puppy for about 3 months before I found out my eggo was preggo! Can't say it's thanks to this dandy gadget but it definitely helped my confidence in the whole planned pregency department. Still sits by the bed for good luck :P Read more