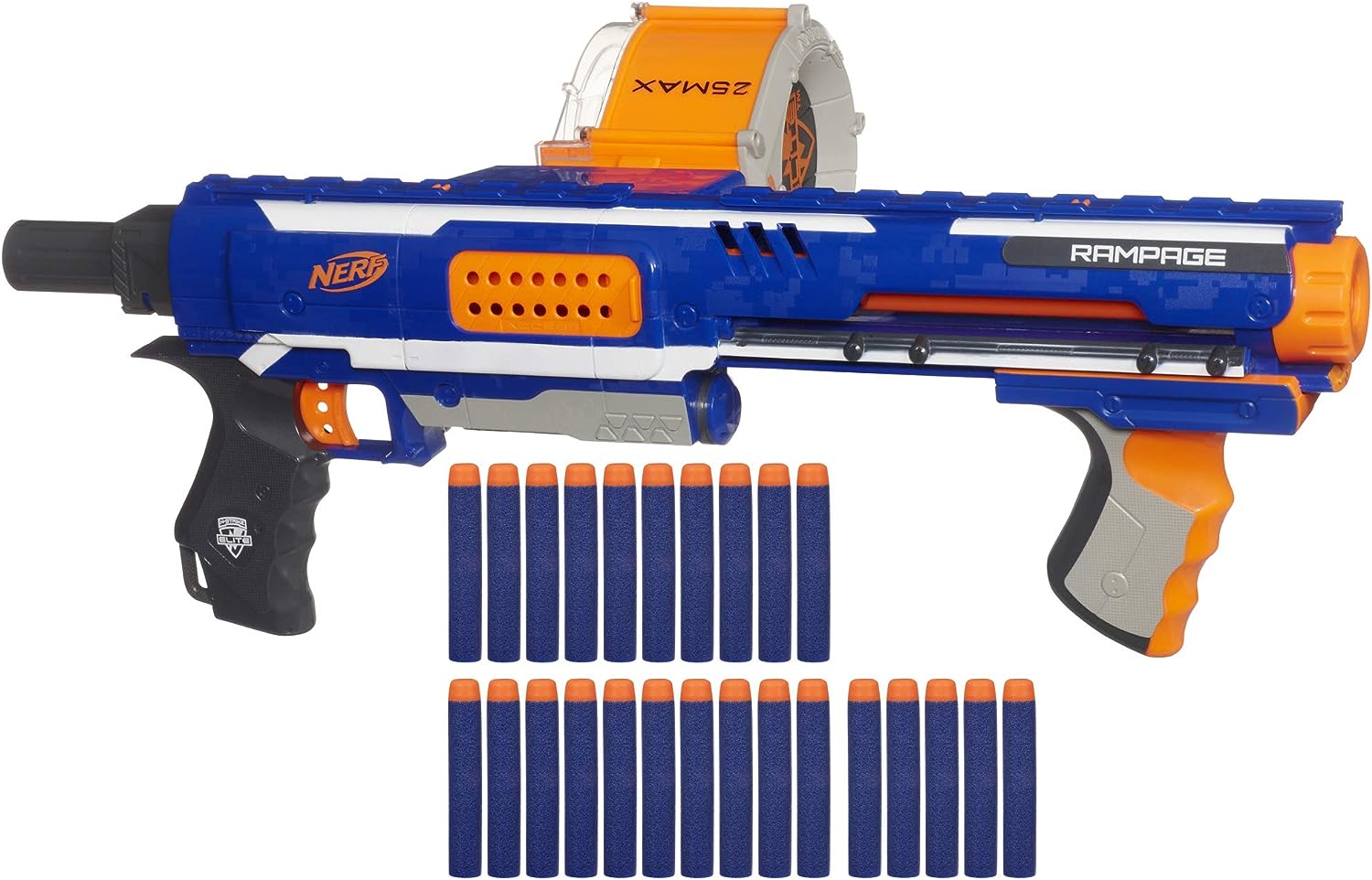 Add to whishlist
Share:
Cost Break Down
Product Description When the mission calls for serious firepower, bring along the Nerf N Strike elite Rampage blaster that packs a high capacity 25 dart drum and comes with 25 official Nerf elite darts. Shoot a rapid fire dart Storm at targets with the toy Blaster’s slam fire action as you hold down the trigger and keep sliding the handle to unleash ALL 25 darts fast. The Rampage Nerf Blaster is manually operated no batteries required so you're in control as you Prime and fire by hand. This blue N Strike elite blaster for kids, teens, and adults is designed for distance, sending darts Streaking through the air up to 90 feet (27 meters). The Nerf Rampage toy blaster comes with 25 official Nerf elite darts that are designed for distance, tested and approved for performance and quality, and constructed of foam with flexible, hollow tips so they're fun to blast and get blasted with indoors and outdoors. Nerf and all related properties are trademarks of Hasbro. From the Manufacturer It's time to take your N-Strike battling to the next level with the Rampage blaster. With a 25-dart drum magazine, the Rampage blaster gives you an incredible rapid-fire blitz, firing revolutionary Elite Darts at a range of 75'. Release a storm of darts at your target by sliding the slam fire handle repeatedly while you hold down the trigger. The drum magazine works with other Clip System blasters (sold separately), and the Elite Darts work with any Elite blaster and most original N-Strike blasters (sold separately). For the final word in today's blaster technology, you need the Elite customization and interchangeable parts of the Rampage blaster.
Product Dimensions
4.02 x 20.98 x 12.76 inches
Item Weight
2.89 pounds
ASIN
B00DW1JT3I
Item model number
98697F01
Manufacturer recommended age
8 years and up
Batteries
1 AA batteries required.
Is Discontinued By Manufacturer
No
Release date
August 1, 2018
Mfg Recommended age
8 - 99 years
Manufacturer
Hasbro

Review:No stars. I just bought this gun for my son yesterday and 1st of all, we can't seem to load the bullets into the drum..not even half way. The bullets get bended and damaged as they are jammed, so my son has to use other bullets to fill up the drum. 2nd the bullets get jammed everytime he wants to play🙁. He spends more time trying to get the bullets out than actual play time with his new toy. I'm completely dissatisfied with this purchase and I wish there was a way to contact the seller. My son has been bugging me for months for this nerf gun, and to see him trying to get the bullets out instead of playing just completely dissapoints me about this purchase. Read more

Date:Reviewed in the United States on August 2, 2017

Review:First, let me say that I'm not a NERF warrior. (But that sounds like fun!) I got this to shoo away pigeons from our house. Given our property location a 22 or even a pellet rifle was not an option. I though a NERF round would encourage the pigeons to move on. For that it is perfect. This little blaster has the range to shoot a NERF round to the top of our roof (one story house), and the accuracy is quite good. I have now convinced the neighborhood pigeons that the other houses look much more inviting. Thanks Hasbro! Read more

Date:Reviewed in the United States on March 2, 2018

Review:My teen loves nerf so I thought I’d get him one that holds more darts for Christmas....but if he gets one, his dad gets one too....gotta keep the impromptu nerf wars fair right? First things first: I was so done wrapping gifts by the time I ordered these. I was terrified they’d show up in some impossible to wrap packaging. WRONG!!! I love hasbro. Showed up in two rectangular easy to wrap boxes. That ALONE earned 5 stars. Then came Christmas Day. I made both father and son wait till the very end to open the last two big gifts. Their eyes lit UP when they saw the barrel for this baby. Packaging went flying, the gun was loaded and ready in seconds, an evil gleam lit their eyes and 25 darts from each was flying around the living room in rapid succession. Unfortunately for me and the cats, reload time appears to be flawlessly fast. We ran for cover immediately! Also unfortunate: this gun seems to jam up less than their others, so the dashs to grab coffee refills between shootouts is severely reduced. Another fun discovery: other nerf mags can fit on this. If you’ve got kiddos, adult kiddos mascarading as parents, or heck adults who embrace their inner child, this is a fun nerf to get. Read more

Date:Reviewed in the United States on September 3, 2016

Review:This nerf gun is wonderful. I use it to wake up the kids I nanny when they oversleep. Typically I leave a loaded (but smaller) nerf gun on their nightstand so they're not entirely defenseless. Then war breaks out. I haven't had /too/ many jams, although I will say one was so bad that I took the gun apart (there are LOTS of tiny screws!). But it hasn't happened since (could've been a bad bullet and my own carelessness.) Read more

Review:Honestly, the only time this gun will "break" or "jam" is when you don't prime it properly with the slam fire feature. It takes a while to master, I'll admit, but once you do you can put flywheel blasters (i.e. rapidstrike or stryfe) to shame in terms of fire rate and range. Onto the review: PROS: -Compact, very comfortable if you're left handed -Good 25 dart magazine for plenty of ammo -Anti lock button if your blaster should lock up -VERY accurate and long ranged in comparison to other blasters on the market right now CONS: -Prone to jamming if you mess up on slam fire priming -if you're right handed the drum can get in your way -doesn't include a stock when it's previous version (Raider CS-35) did, at the same price too All in all, I'm very satisfied with my purchase. I've taken my modified versions to nerf wars with huge amounts of success, and once I mastered the slam fire I was clearing rooms with ambushes. If you're right handed, I'd at least recommend the Elite Alpha Trooper for its bottom magazine feed. But if that doesn't bother you too much, the Rampage is definitely your all-purpose primary that will stand out in your arsenal! Read more

Date:Reviewed in the United States on December 7, 2018

Review:Okay, so this a re-launch of the Nerf N-strike Raider CS-35 that came out in 2008. It came with 35 darts and a 35rd drum magazine, and the lovely raider stock that we all know and love. I personally loved the blaster’s aesthetics even despite the side-loading, however one thing was wrong: the original raider performed poorly, in standard shots and even worse in slamfire. Removing locks made it better but still not quite good enough. Those were also the days of god-awful streamline darts. But in 2011 this beast, renamed the Rampage, comes out and operates exactly the same except for one thing: beefed-up Elite internals. The Shell feels the same, with an addition of a de-prime button is a very nice touch, because that means you can re-prime the blaster’s action and single-load a dart into the breach so that you don’t have to dry-fire once youre ready to empty the blaster (it’s bad for these internals to dry-fire). It does not come with a stock like the raider did, and comes with only 25 darts and a 25rd drum mag, albeit a much better design than the old one. I have not removed the locks just yet on this blaster, so I’ll have to wait and see how that works out for the priming action. Sadly one of the locks that needs to be removed is attached to one of the moving parts and needs to be dremeled off. And then the other thing, is that the side-loading is of course awkward at first and can get quite obnoxious with bigger magazines. But if you don’t like side-loading, go with the alpha trooper (aka, the new “Accutrooper”), because other than some internal differences, that and the rampage perform pretty much exactly the same. The Alpha trooper is actually more ergonomically friendly to a wider variety of people, because of its linear magwell, not only giving it a lower and slimmer profile, but also making reloads easier overall. Also switching shoulders with this thing is honestly when you really start to feel imbalance with the blaster. But me personally, I’m willing to look beyond all that because this thing is a powerhouse. The rampage fixes everything I hated about the original raider: lackluster performance and bad slam-fire. This does well both slam-fire and standard shots. Overall, for $30 I’m very much satisfied with this blaster, and I’m glad it’s on here for how low the cost is. If you already have a raider and you love it, either put it in storage or get rid of it, then get this blaster. You will not regret it if you’re a lover for this blaster. Read more

Review:"I bought a Nerf gun called Rampage. I has a capacity of 25 darts. If jams rarely (once or twice in 25 darts). It has a secret bullet storage (1 bullet) in the handle. It has a jam access and drum jam access. It has 2 big tactical rails. It is a Nerf Elite N-Strike Rampage. It's a blue and white gun, and the drum is orange and transparent, the darts are blue and orange. We have Nerf wars with me and my friends. I got it for my birthday. I rate the gun 4.8/5 stars." This is a review written by my 10yo son, pasted here verbatim. Read more

Review:This is not all working Read more