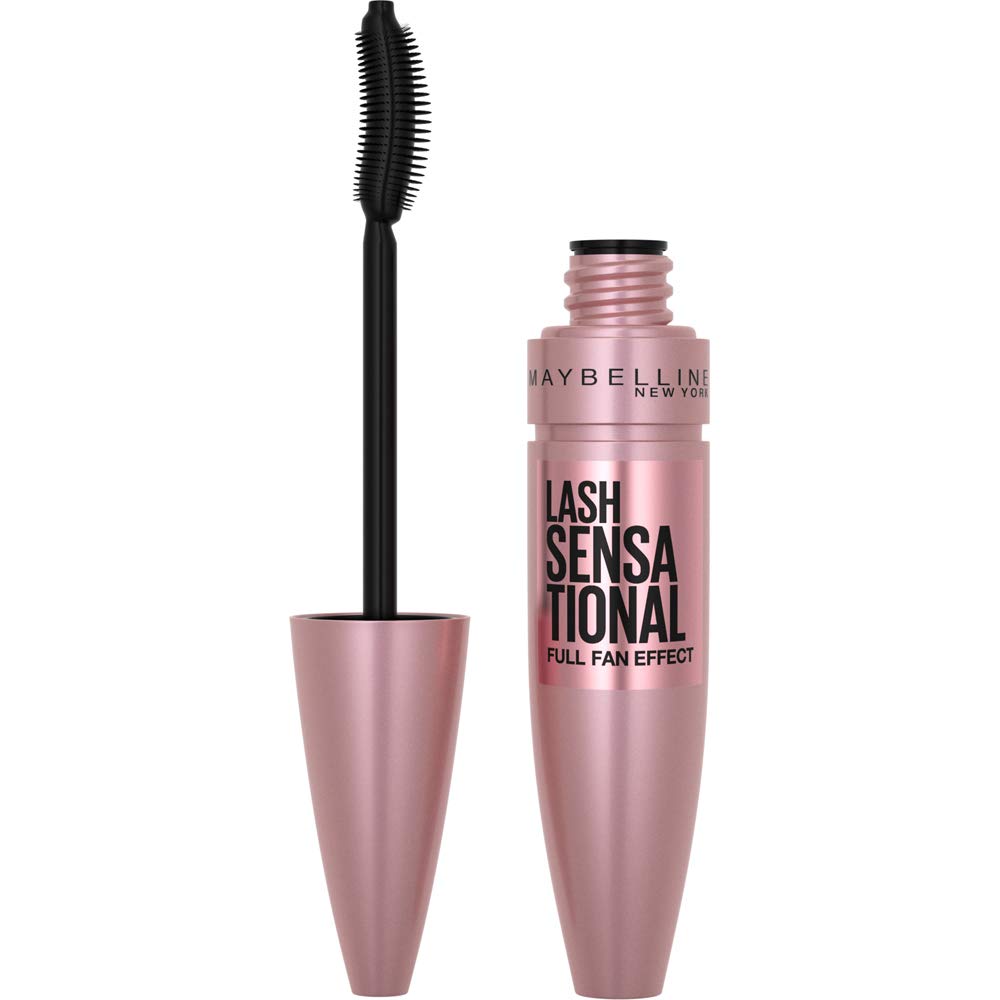 Get an amazing Maybelline New York’s fan favorite Lash Sensational Washable Mascara! Maybelline Is the Eye Expert. Whatever your signature eye look, whether dramatic and natural, this mascara helps you to create looks that draw eyes.

Date:Reviewed in the United States on January 18, 2020

Review:So we did a little experiment and my friend compared Maybelline Volum' Express The Colossal Washable Mascara & Maybelline Lash Sensational Washable Mascara.. they seemed to have similar results as you can see from the pictures... while the Sensational Mascara seemed to lengthen her lashes, she did prefer the Colossal Mascara. It seemed to create fast volume on her lashes instantly while lengthening too. The Mega Brush and collagen-infused formula of the Colossal seemed to give massive volume in just one coat! Also, it was nice that it is clump-free!!! Both mascaras were washable which was nice when it came time to remove the makeup.. So in conclusion: While both had good results she liked the Colossal Mascara's quick volumizing in one coat over the Sensational :) Hope this review helps at least one person trying to decide between all the many mascaras on the market!😁 If it is helpful to you, then please let us know by clicking on the little helpful button below👍 Thanks so much!! Read more

Date:Reviewed in the United States on January 15, 2019

Review:I naturally have eyelashes that go straight down. There is absolutely no curl to them whatsoever (the complete opposite actually) and I feel like eyelash curlers have also been culprit to my lash loss. This mascara is exactly what I was looking for. I have lost a lot of volume in my lashes over the years because I was using really intense mascaras that would not come off without having to scrub hard and lose a lot of hair in the process. This mascara stays on ALL day and as you can see, makes a huge difference in how full my lashes look. It removes easily with makeup wipes and does not flake throughout the day. I will say, it begins to flake after about an 11 hour wear and thats when I remove it. Great overall though. P.S. In the photo, I used about 3 coats. Also, it does not dry immediately (this does not mean it is messy) which is good because you can build the product without discomfort. Read more

Review:I purchased this mascara to replace another maybelline mascara that I hated. I had read the good reviews, but I was skeptical. I get Birch box and have gotten some amazing mascaras in it...but I just can't rationalize spending $20 for mascara. So I tried this. I didn't like it at first because the wand is plastic...not the brush type, which I prefer. But then I learned how to use the wand...it's like a combo wand of every type out there! It has you covered from every angle...and man, I love this stuff! My eyes don't go a day without it. See the picture to see the difference between my eye without it (right) and with it (left ). Buy it! Read more

Date:Reviewed in the United States on August 5, 2018

Review:Taking a close-up of one's eyes is surprisingly challenging. The brush is tricky, which is one of the reasons this doesn't get 5 stars, another is that it seems to be quite thick. The thickness combined with the tricky brush left me with some clumpy spots and a bit of a mess on my upper eyelid. However, the results are really quite good. If you can manage not to get too much product on the brush at a time, the longer side of the wand really does help fan out lashes and separate clumps. I've tried a lot of different maacaras, and this one is hands-down my current favorite. I also appreciate the washable formula. Trying to remove waterproof mascara is a sysiphusian effort and often leaves my eyes sorry and red. I love not having to fight with it! Read more

Date:Reviewed in the United States on November 14, 2016

Review:I love it! In my photo you can see the difference the mascara makes! Read more

Date:Reviewed in the United States on August 4, 2018

Review:At first I was going to give this a noncommittal "eh" and say it was average, but after using this for a bit, my opinion of it has actually decreased. The bad: it clumps my lashes together, giving me the exact opposite effect of adding volume; it makes my lashes appear even more sparse. One coat doesn't do much, but the more you add, the worse this clumping is. It's also extremely messy. It'll get on my eyelids no matter how careful I am. I'm also not really a fan of the brush. I've gotten used to it, but still not a fan. I'm not sure if the problem is the brush, or the product's formula. I'm going to wager it's both, because even with an eyelash comb, the clumping problem is apparent. The good: it doesn't smudge much. It's also easy to remove. It appears to add length, as well, to the eyelashes, but I'm not a good judge on that, as my lashes are already long. My problem is volume. Sadly, those good points aren't enough to save this mascara. It's not a product that works for me. Read more

Date:Reviewed in the United States on July 8, 2018

Review:This mascara stays on better than my old voluminous waterproof one. I used to get smudges under my eyes all the time from my old waterproof mascara and it was annoying. I bought this mascara on a whim and after getting used to the brush, I really like it. I have pretty fine lashes so I like to scrape off most of the mascara and apply it with the short bristles with very little product on the wand. Then I can go back in and apply more coats to add volume, that way I don't get like 5 clumped up mega lashes. I LOVE that this stuff washes off in the shower. I just take a little soap and gently rub my lashes a little and it comes off. I used some makeup remover on a cotton pad after I showered to see if there was mascara still on my lashes but there wasn't, it really does wash off. I don't get how it can stay on so well without smudging and flaking but not be waterproof and wash off with soap and water. Read more

Review:An amazing dupe for my Lancôme Hypnose mascara - and a fraction of the cost. I layer my mascara because I like a bit of a clump but it glides nicely if you just want separated and lengthened lashes - just make sure you use the correct side of the brush. Is it called a brush? The plastic bit on the end of the wand? Anyway, it dries out so work quickly and it’ll keep for the 6 months you should have a mascara open for. If you’re reading this and you’ve been using a mascara for longer than that, BIN IT IMMEDIATELY. No, really. It’ll be crawling with bacteria that you’re just putting next to your eyes every day. Replace it with this mascara as it’s cheap as chips and fab! Only downside is that the tube is ridiculously shaped. Is it mascara or a space ship? Who knows. Read more

Date:Reviewed in the United Kingdom on January 9, 2018

Review:I've used a lot of different mascaras, from higher end (benefit they're real, clinique) to high street and I have to say this is the one I always come back to. It's nice and affordable (I got this for £5 in the black Friday sale!) And gives me the most voluminous, dark, thick and elongated lashes in just one layer! I love the brush shape - the concave side is perfect for getting product onto your lashes to make them look nice and thick, and the convex side perfect for elongating your lashes. Honestly if you haven't tried this yet, give it a go - it's a big hit on YouTube and with beauty bloggers too and it really does live up to the hype. Read more

Date:Reviewed in the United Kingdom on November 9, 2018

Review:This product is ok. Unlike other reviewers, my product was actually sealed when it arrived. At first it is pretty nice to use. The brush is quite fine (see pictures) which gives a nice even distribution of the mascara. However, after a while, it seems to dry up a little and even with the fine brush becomes quite clumpy / tacky to apply and sticks my lashes together. Water needs adding to thin it out, and even that doesn't work sometimes. Read more

Date:Reviewed in the United Kingdom on August 2, 2018

Review:Ran out of a Ted baker mascara I got for Christmas. Wasn't looking for anything special just quickly ordered the one with the best reviews. Glad I did as I found the mascara I will use for as long as it's out. Was asked a few times by different people if I'd had lash extensions when I first got it. Really easy to apply doesn't need lots of coats like the others I've had did so saves me time in a morning. Glad I bought this and have been recommending it to everyone who's asked about my lashes. Read more

Review:Love this mascara, it stays on for quite a time, and gives a nice thickness to the lashes, it doesn't lump or get sticky. It did not come sealed though. Did not look used, but since expiration is 6m after opening, how can you tell if it wasn't. Read more