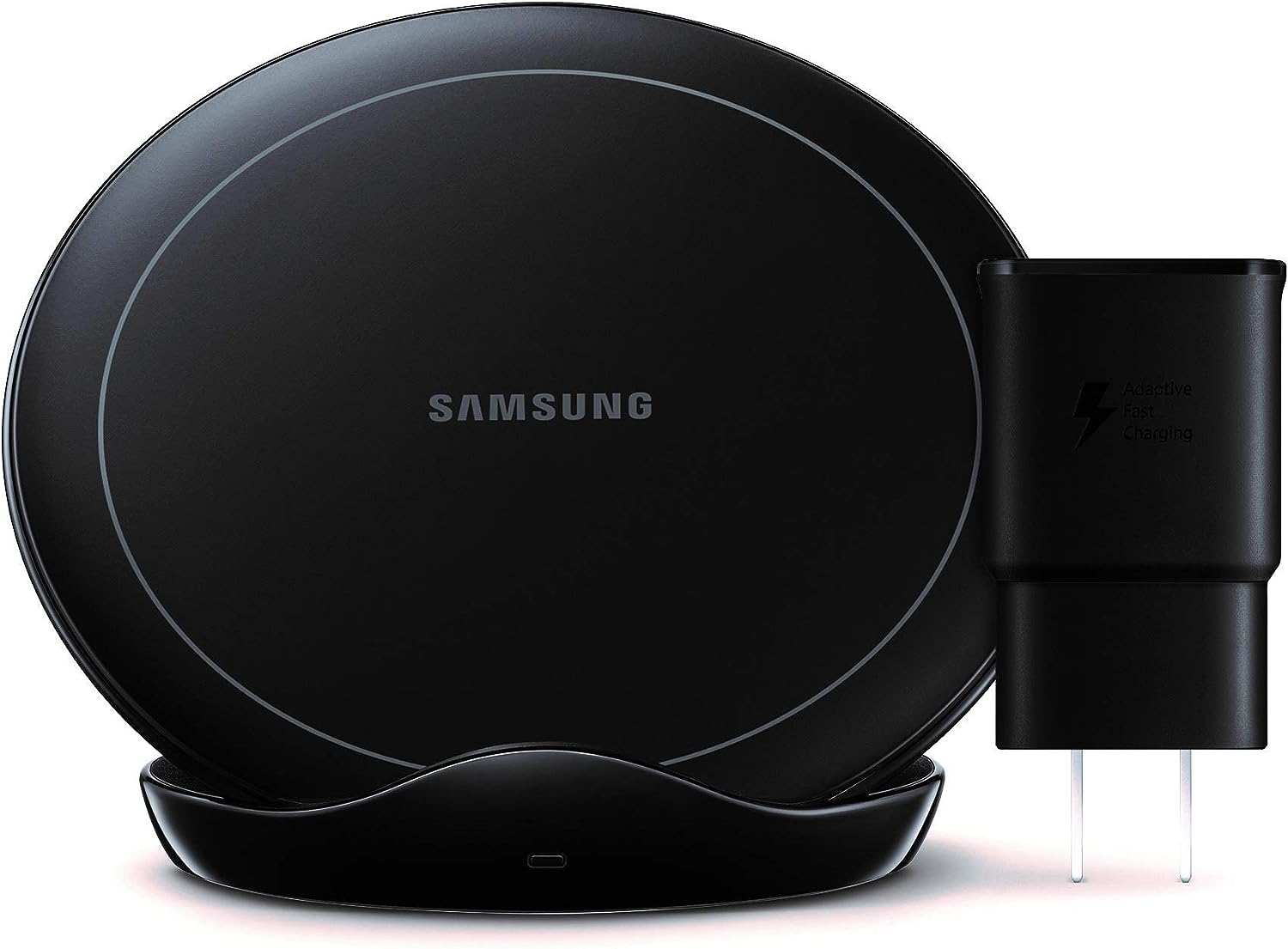 Date:Reviewed in the United States on January 6, 2020

Review:I like how you can place the phone upward or sideways. It charges as it should, but after doing some research and speaking with Samsung the auto mode with the cooling fan won't work or even turn on for anyone running an outdated One UI. The Note 8 has One UI 1.0 and this wireless charger requires One UI 1.5 at least. Samsung stated it won't get the update either. So I advise any Note 8 users to buy the older wireless models as this is just a waste not being able to use all the features of the charger. Read more

Date:Reviewed in the United States on December 16, 2019

Review:Not a fast charger, the description is incorrect! It takes over 3 hours to charge the Note 10+. Very disappointing product Read more

Date:Reviewed in the United States on January 19, 2020

Review:Samsung's wireless charging stand works well with my new Note 10+ phone. It charges the phone from 10% to fully charged in only 80 minutes, and the Note 10+ has big battery. The stand is stable with the phone in either the vertical or horizontal positions, and the rubberized base and phone surfaces make sure neither the charger nor the phone slip around while in use. However, the charger pad is VERY particular about how you plug it into the power source. It works perfectly with the Samsung wall power adapter and USB-A to C cord provided with the charger. It also works with the Samsung fast charge wall adapter and USB-C to C cord which came with my Samsung Note 10+. But other adapter/cord combinations are likely to fail, causing the charging pad LED to blink orange even before the phone is placed on the charger. My reliable Anker fast charge adapter will not power the charging pad using any cord, not even the Samsung cords. Conversely, the Samsung power adapters do not work if I change to a non-Samsung cord. The supplied 3-ft Samsung cord is too long for my desk, but after trying three different shorter, good quality USB cords I have been unable to find one that works; longer cords also fail. I contacted Samsung, and was courteously told that the instructions say to use only the adapter and cord provided. They are perfectly correct, and in this case they seem to mean it ... The other minor issue is that the photo shown in the Amazon listing shows the charging pad surface to be a horizontal oval shape. The charger I received has a circular pad surface. The model number on my charger is EP-N5105 (the correct 2019 model), and other markings match the photos. Furthermore in some of the manufacturer's stock photos the pad appears circular, so this may just be a photographic anomaly. Just don't be surprised if it doesn't look exactly like the pictures. Read more

Date:Reviewed in the United States on January 16, 2020

Review:The charger is nice, I had no problem with hooking it up and placing my phone on it. My phone is a S10 Plus. When I went to register the charger with Samsung, it kept coming back as not a valid model number. I chatted with someone from Samsung and they weren't able to register it either. I hope that doesn't mean it's not a OEM Samsung charger. Read more

Date:Reviewed in the United States on February 29, 2020

Review:I'll have to use it for a couple of weeks to see if I'm going to keep this or not. I read it was working on a Note 9 with an Otterbox. And it true, it does work in landscape. If you want portrait charging, your gonna have to take it out of the Otterbox. I did and the phone would charge in the portrait mode. But, can't do that, I'm still paying for my phone. Charging seems slow, so I went to device care and then to battery to see how it was being charged. It stated it was charging in fast mode. I added pics showing the light/no light charging and then a screenshot of it charging. PS. We have to Note 9s in the house and both with the same cases. And both did the exact same thing. Also, if I send it back, I'll come back and update. But I'll probably keep iit. 04/12/2020 I did not send it back so-When I put it on the charger, I have to put it on slightly harder than just laying it on while looking for the charge light. Otherwise there's a big chance it won't charge. But way better than wearing out my Otterbox and charge port. Read more

Date:Reviewed in the United States on January 16, 2020

Review:All I can say is my Samsung Galaxy Note 10 plus charger arrived when promised. And it is a nice looking unit. The only thing is my Galaxy Note 10Plus is large so I have to lay it on its side but it charges well. I'm giving this 5 stars because of the item arriving on time damage free and works with my phone. I don't purchase anything because of a review some can be biased and others good. This is why in my reviews I write I say don't take my word for it but find out for yourself. But as far as I'm concerned so far so good. And it's made by Samsung. Read more

Date:Reviewed in the United States on February 16, 2020

Review:I bought the product because my Galaxy Note 9 glitched on me and permanantly says I have moisture in my charging port. This means I can't plug anything into the charging port. I was debating between this charger and the Samsung Wireless Duo Charger. I went with this one because I like to watch netflix when I do the dishes and I'm usually charging my phone at the same time so the stand is convenient. The only downside is it takes a while to charge my phone since it is only 9 watts compared to the regular charger being 12 watts. When my phone is completed dead it usually takes 2 hours and 35 minutes to completly charge to full. Other then the amount of time it takes, the product itself is great and does exactly what it states. Read more

Review:Been running the S9 for over a year and the old LG cable I was using was starting to see better days. I decided to try out this charger instead. Only downside is it does not work with the Anker dual port quick charger. (which can provide more power and I use as the other port is for my Olight charging dock). So Instead I changed out my lamp for a USB powered one so both plugs on the wall are utilized with USB adapters now. Quick solution without putting a power strip down. Charges fast, only other critical is they should add some glow in the dark lights on the charging ring so you can put your phone back in the dark vs reaching for light switches. Placement is not super critical but it is hard to find the right spot in the dark Read more