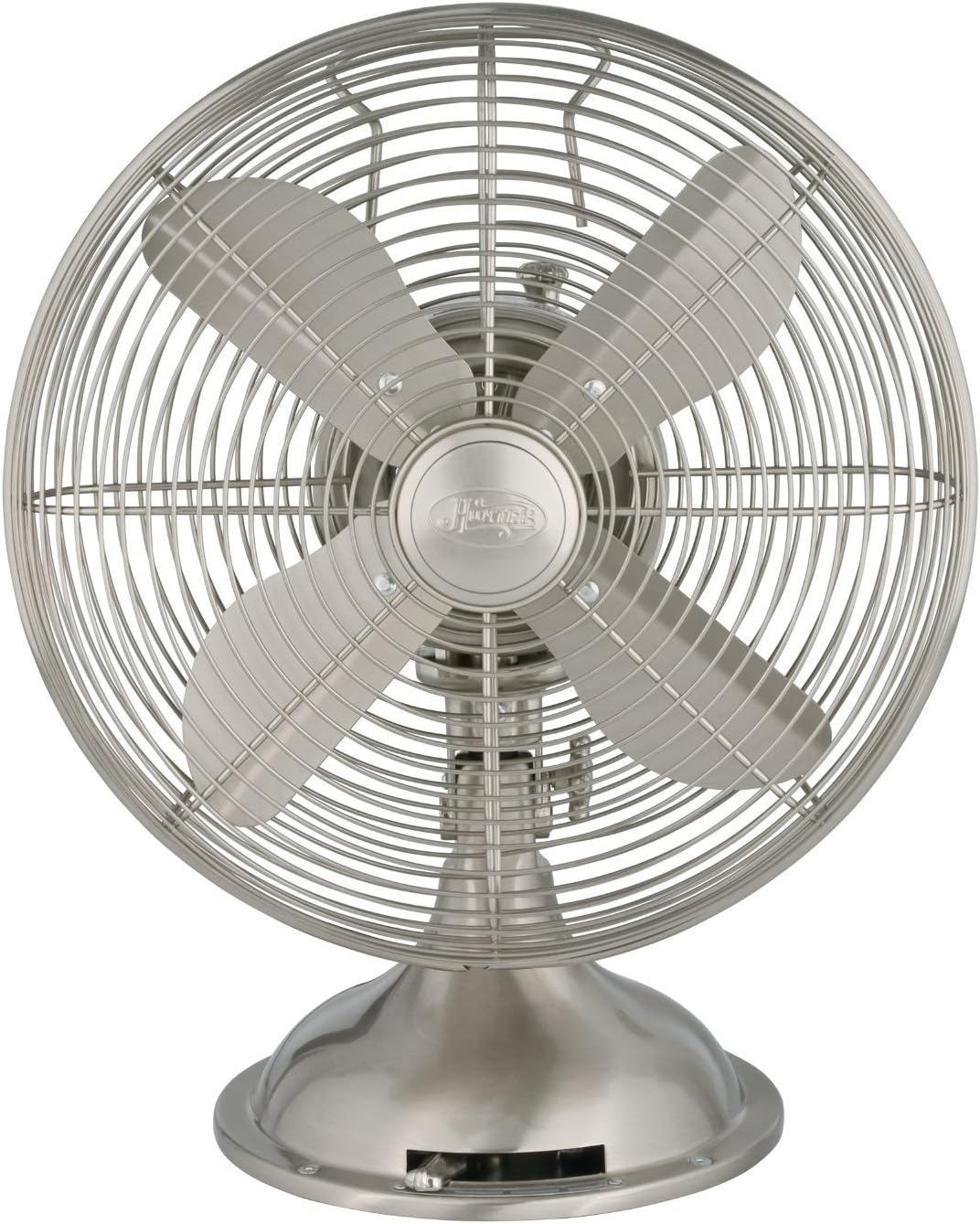 Color: Brushed Nickel The classic Hunter Retro Fan stands the test of time, continuously proving to be a sought after addition to any home. Equipped with a 3-speed Hunter motor within it's all-metal construction, this 12" table fan brings retro style, quality craftsmanship and unmatched performance in portable, reliable and decorative package. Whether you are looking for the Brushed Nickel, Oil-Rubbed Bronze or Onyx Copper finish, the unit comes fully assembled and ready to use right out of the box. Product use and warranty applies to the 48 contiguous United States.

Color: Brushed Nickel The classic Hunter Retro Fan stands the test of time, continuously proving to be a sought after addition to any home. Equipped with a 3-speed Hunter motor within it's all-metal construction, this 12" table fan brings retro style, quality craftsmanship and unmatched performance in portable, reliable and decorative package. Whether you are looking for the Brushed Nickel, Oil-Rubbed Bronze or Onyx Copper finish, the unit comes fully assembled and ready to use right out of the box. Product use and warranty applies to the 48 contiguous United States.

Date:Reviewed in the United States on June 5, 2017

Review:Mine was 35 days old when it died. It died a slow death after speading up and slowing down on its own. It finally came to a full stop and hasnt even tried to start again. I called Hunter repair 1-888-830-1326 (as listed in the warranty) and they had me check the fuse in the plug adapter. It checked fine. Since this product is no longer being made they could not ship me a new one so they referred me to the Hunter Home Care department. This department refurbishes and redistributes fans. I called Hunter Home Care (888-880-3267) and explained my fan was 35 days old when it died and that I had checked the fuse. He immediately asked for my name and address and immediately stated he would send a replacement. I was shocked to hear that and that it was so easy, the call probably lasted no more than a minute. According to them, the replacement will be here in 3-5 business days. Update: I received a refurbished fan from Hunter about 6-7 days after my call. The refurbished fan looks brand new and seems to be working fine. This is one of the better customer service experiences I have had in a VERY long time. Nice recovery Hunter! Read more

Review:Not anything like the one we already have. Now made in China. Not in Tennessee. Dramatic drop in quality. we bought two more because we were so happy with the Original. Does move air better than others. Still metal construction, just very tinny sheet metal, not cast. Fan blade cage very noisy. Rattles. My last Hunter products. Update. September 1st,2018. Purchased April 27th 2018, died tonight. DON'T BUY!!!! Unless you want a paper weight. 4 months, no warranty. Complete noise junk. Read more

Date:Reviewed in the United States on October 24, 2015

Review:Years ago I purchased a hunter fan that was extremely similar to this one. It still to this day works wonderfully. It went for several years before its started to need any kind of maintenance. Now every 6 months or so I take it apart, oil and clean all of the parts, put it back together and on she goes. When I needed a second fan I decided to get another hunter fan of the same style. I was however rather disappointed with this new model. After only a few months of use it began to show signs of needing maintenance. Taking several minutes to get up to speed and rattling/creeking for several more minutes after that. Then when I went to take it apart to do said maintenance every single screw stripped out immediately making further attempts to fix it even more difficult. The change to cheaper materials and worse quality in just a few years time is quite depressing and now this fan is barely functional. Sorry hunter but this thing was nothing but a disappointment. Read more

Date:Reviewed in the United States on October 14, 2016

Review:No assembly needed out of the box. Plug it in and it works! Seems quiet enough and powerful enough. The rotating swivel head movement is smooth. I needed an all metal fan that can sit on the hearth and circulate heat from my wood stove. I've had fans with plastic blades warp from the heat. This should do better, but you still have to protect the plastic/rubber cord and internals. My only complaint is that I am surprised how little tilt there is in the tilting head. I am guessing about 10 degrees. I've tried to show the tilt in the pictures included. Read more

Review:Looks nice, but it's a piece of junk and likely an electrical fire hazard. Been through two of these in less than two years. When the first one died I contacted Hunter's customer service and they said I had to take it to a service center, but they couldn't locate any service centers near me. Useless. Thinking maybe it was just bad luck, I bought a second unit. It survived six months - less than the first one. Died last week. It just makes a low hum/whine when switched on. Blades no longer turn. Not worth my time to call Hunter's customer service again, or drive somewhere to have it looked at, much less pay to have it repaired. Avoid! Read more

Date:Reviewed in the United States on September 17, 2020

Review:This fan looks very retro while also being "cool". Quite quiet, smooth operation, fantastic looks. Fan arrived fully assembled -- just pull it out of the box and plug it in. Great for dweebs like me who have trouble with "some assembly required." It is a touch on the pricey side since plastic fans at the home-improvement superstores cost half as much, but it's hard to go wrong with black steel and whisper operation. Read more

Review:I bought this fan to get the air moving in my workshop. I own/operate The Tufted Frog, and live in southern Arizona, working out of a 200 square foot shop that can turn into a moist box of hot air during the summer. Even with the A/C running I'm sweating my buns off all day. The fan arrived yesterday, I plugged it in, turned it on, and worked all day in my shop without sweating a drop. Well maybe one. It's SLIGHTLY less powerful than I expected, but it does it's job well. Other than its effectiveness, my favorite thing about this fan is it's aesthetic. It is thing of classic beauty. Sure it's pricier than a white plastic fan, but it is SO pretty. Its finishing screws are visible, which I like, in case I ever need to tinker with it. It reminds me of the way things used to be made. So let's hope it lasts as long. Read more

Review:Brand new out of the box on all speeds it rattled like it hade bad bearings in it. Sounded like an old worn out fan..Speed selector if not in just the right place would not run. Would not recommend wasting your time purchasing and returning. Read more

Review:Study fan. Looks great. Bought for my bedroom. A bit loud for a bedroom on low setting. Read more