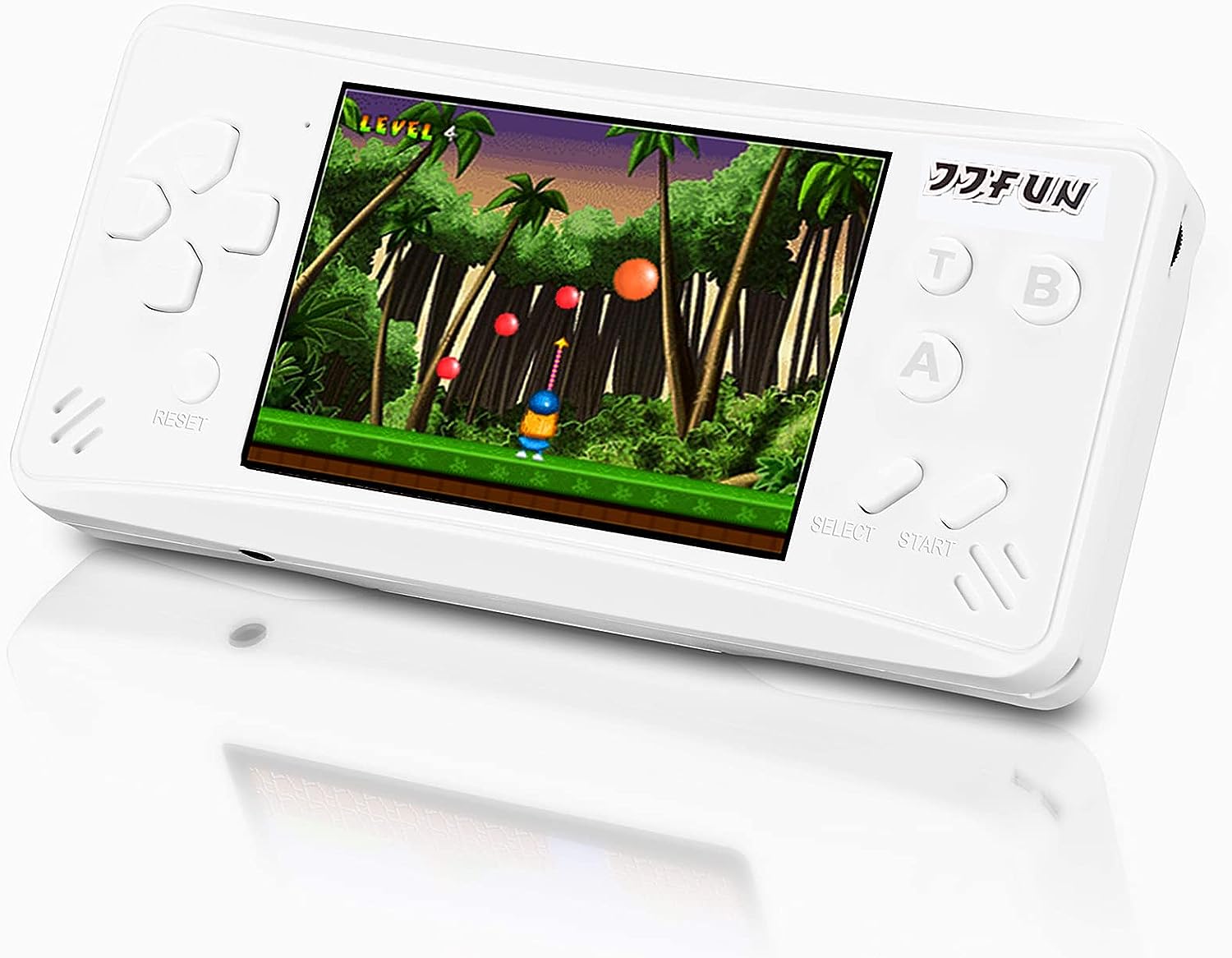 Date:Reviewed in the United States on December 11, 2019

Review:Bought this for my husband who has been wanting a handheld gaming system that is portable, mutable and has some of the old Nintendo games he used to play as a kid. This checked all of those boxes. The device has a lot of the old Mario games and quite a few arcade-style games (think Donkey Kong) and has some board games as well like Othello. One caution, although my husband thinks it’s hilarious and it has added to his enjoyment of the system—many of the 500 games are Asian in origin, not sure from which country, I haven’t looked, but they are in a foreign language. He’s played a few of them and said they are really enjoyable. The display is in color and the controls are intuitive. They take a little getting used to but are usable right out of the box. It’s is a good value for its price point. If you want something more, buy an actual NES. Read more

Review:Even when it looks they try to give good impression. The unit that has a very good screen. DOES NOT WORK. Mine cane with A key always press (like some kind of Turbo) the Turbo key will not disable it. SO to be able to play any game I need either to keep my finger in A so the games will not auto shoot and release when I wanted to shoot. This makes the machine unusable. Try to open it and half of the solder points literally came loose when I open it. Just threw it to the trash.. Do not buy !!!!! Sad because it looks they were trying but their poor quality control kills them.. DO NOT BUY.... Read more

Review:The concept of this gaming system is nice but the manufacturer(s) are cheap. I order this and had to return it the same day because one of the buttons didnt work. I requested a replacement, when I received the second one it worked but not entirely, I tried to conected to my TV and ... didnt work 🤷🏻‍♀️ Read more

Date:Reviewed in the United States on April 9, 2020

Review:Retro Handheld game for a happy husband! I got this game for my husband who loves retro games , this one has over two hundred games and it is portable with perfect weight to carry around! it is like a pocket arcade! chargeable, stays tight in your hand without flying away! :) It is very simple to use for children and adults too! great gift for those that want to bring back memories and build new ones! Read more

Review:The game was not useable, the controls had one button permanently engaged, so for instance on MARIO 3, Mario is permanently jumping, this same issue prevented the play of any games. Throwing in the trash. Read more

Date:Reviewed in the United States on January 13, 2020

Review:I can definitely appreciate some of the games on this device. A lot of them are from my childhood. However the younger generation might not lock in so quickly. My son plays Mario but as of now that is all he's interested in. Read more

Review:I bought this as a gift and we both are disappointed. I wouldn't even recommend it to a young person. The games are from 10 years ago and very Pac-Man like. The instructions are poor. The hand strap doesn't fit. The fonts are very tiny and not well formed; hard to read. Read more

Date:Reviewed in the United States on January 31, 2020

Review:Had the product a couple weeks. The third time I tried to charge it for my son, the charging piece was broken off down inside the device, so I couldn't charge it. Screen quality was decent. Game options were ok. I'd definitely buy something more up to date though. Read more

Review:I purchased consoles like this before but it wasnt for me, they were gifts for my friends. But during this lonely time, with the pandemic and all, i wanted something to take my mind off of all the negatives. I remember play these games on big Nintendo consoles and with all the technology, you could fit 218 of those games to a single portable console thats the size of your hand. Isnt that incredible? This specific console is just amazing, it has 218 games like i mentioned and the control layout is very easy to get used to. This brings back all the memories from when i was a kid. I would rate it 5 out of 5. Read more

Review:Loved that it came with the lithium battery and was still somewhat lightweight. In the 20th century there were heavier handhelds, sometimes you get tired from the weight or the combination of the weight and the thumbwork. I gave this to my 4 year old. He absolutely loves it, keeps him occupied when he gets bored of other things. He keeps going back to it, too, the same games instead of trying others. Volume control is a bit difficult for him to change, maybe that's a good thing? It also has several hours of battery use before recharging, and you can use it while it recharges. I noticed most/all of the titles were non-NorthAmerican variants, west pacific region. The title screens of the games are usually not in English, although the text in games usually are for the most part. Some games are bootleg variant ports, such as Angry Birds, which reminded me more of those early handheld game screens that had a dim ball in 5 locations and only one lights up at a time, to show motion. All in all, its a good random selection. There is no tetris but there is a Dr Mario. Never heard of most of the games but when you play them there's only so many genres anyway. And its very playable. The wriststrap is a nice touch, although it has been a bit of a nunchaku in my childs hands. I looked at some other devices that were similar and this doesn't seem to have any of the main gripes the others apparently had. It's a good little device, I would get a 2nd one if my other was old enough to enjoy it. These are great for road trips when you don't want them using your phone, or maybe you let them use one of your old phones and you can swap devices to charge them, this is a good device to swap in! Recommended. Read more

Review:This retro handheld game player is fun with a lot of variety but it’s for just having fun nothing serious. The screen is bright and easy to read when looking at it and the handheld feels comfortable to hold. It’s also rechargeable when needed which makes things easy instead of switching batteries every couple of days. This handheld would be perfect to have in your purse for quick games when you’re bored or have downtime. The games play well and with a lot of variety it can keep you entertained. The buttons are a bit janky and unresponsive at times but I’m still having fun. Overall it’s a nice handheld game player for what it is and I’m happy with it. Read more

Review:Pros: Lots of old console and arcade games Can connect to TV for better visuals Has headphone jack so you don't drive others crazy Has a built-in lithium battery, but is also set up to run on 3 AAAs Price is pretty good for what you get Cons: You have to scroll through the whole main menu to find a particular game. There are no shortcuts or bookmarks to quickly get to a favorite game. Doesn't seem like it can save games, at least not in the ones I've tried so far, so you always have to start a game from the beginning. Read more

Review:The construction quality is okay i.e. not very great also not very cheap. It’s mainly made of plastic material. From look and feel wise it’s good. The buttons on control panels are laid okay and they are easy to reach and operate. It comes with preloaded 218 games. The screen size is okay and it displays games okay. The quality wise the display is bright and vibrant colors do look okay. It has a rechargeable battery that makes it good for traveling. Overall it’s a decent handheld game console. Read more