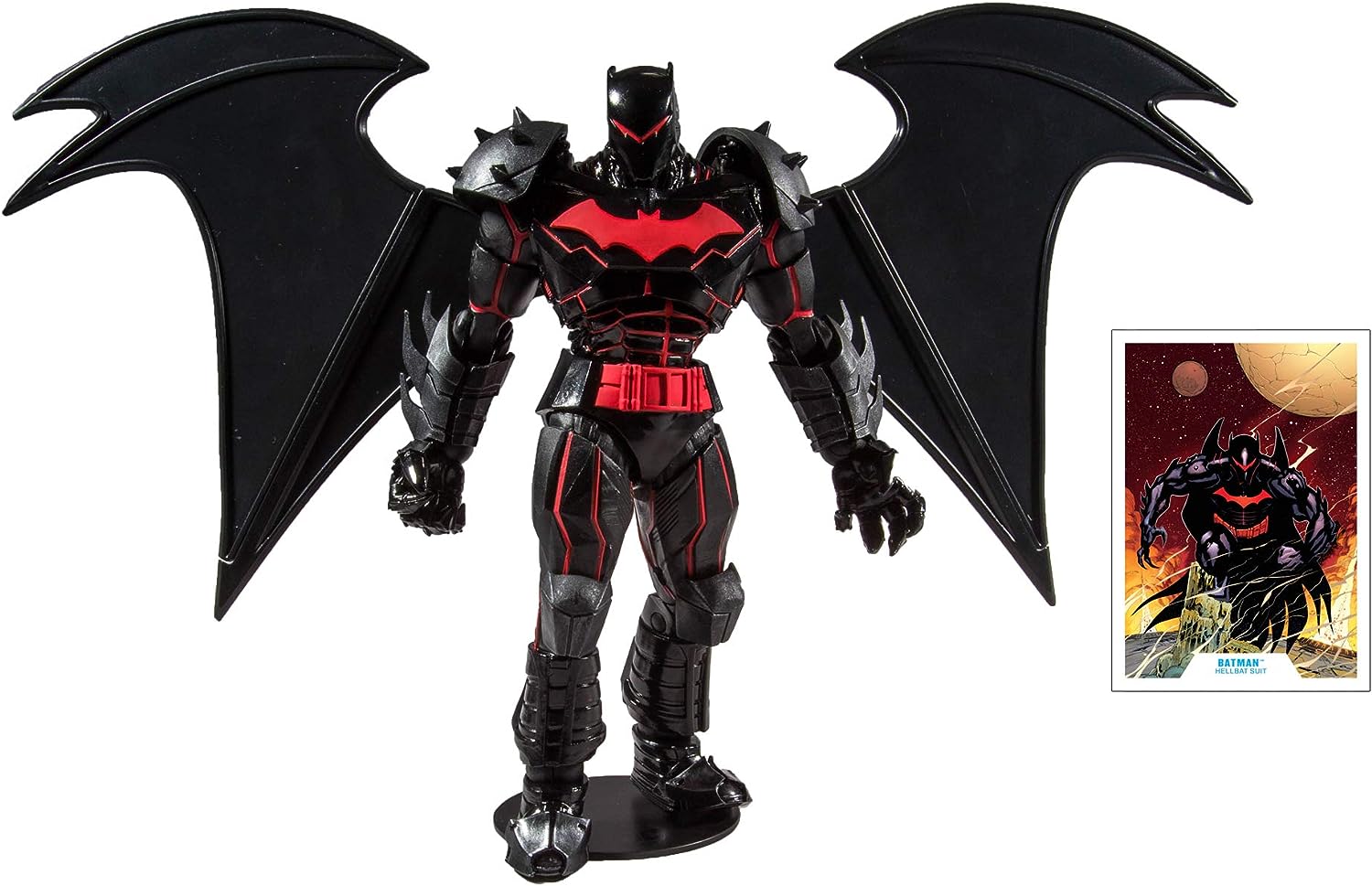 Date:Reviewed in the United States on January 29, 2020

Review:Just received this guy in the mail today & I am extremely impressed. I'll get the issues out of the way first, when I took him out of the box his hips were very loose going out to the sides but I fixed them with a little Crazy glue, his diaphragm joint is a little loose when facing forward, & he can't look up at all & not far to either side. Everything else about this figure is AMAZING. Except for the head, articulation is really great, sculpt is top notch & paint work is exceptionally clean. He's very heavy & feels very substantial in hand. This is my 3rd Mcfarlane Multiverse figure & is by far the best yet. I would have given it 5 stars but I had to take one away for the at first really loose hips. If you find him he's totally worth getting. (Instructions for hip fix) Get some Crazy glue that can be dispensed carefully & add 1-2 small drops to crevice of loose joint, move joint continuously & slowly until you feel more resistance, continue moving for about 1 minute & then move a little bit every 10 seconds until you're sure it's dry. This should result in a tight hip joint so figure can stand with ease. (WARNING: apply at own risk) I suggest u watch a tutorial on YouTube first. Read more

Date:Reviewed in the United States on January 31, 2020

Review:This is such an amazing figure, great paint job, awesome articulation, the size of the figure is quite large as well. For $20 you can’t go wrong with this figure, especially to have it on display to admire. Read more

Date:Reviewed in the United States on February 12, 2020

Review:I've never read the comic that this suit was based on but don't care this guy is amazing. It's like Superman and the power rangers had a baby. He looks great hes very solid. If you're expecting amazing articulation then he might not be for you. But if you just want a really cool figure who looks great on the shelf then this ones for you. Read more

Date:Reviewed in the United States on February 18, 2020

Review:When McFarlane was first awarded the DC license I was skeptical, to say the least. Even after seeing the publicity shots of Wave 1, I still had my reservations that McFarlane could deliver the goods. Still was left unconvinced after seeing some of the figures in person. BUT, after seeing photos of the Hellbat, I knew I had to own this figure! When he finally arrived, I couldn't get it out of the packaging fast enough. This figure is a BEAST in every sense of the word. He's high quality and heavier than what you would expect from a figure released to the mass market! Great paint apps, solid articulation and easily one of my favorite Batman figures. The detailed sculpt is something McFarlane has built its reputation on and once again they have knocked it out of the park! This figure should serve as the gold standard for how McFarlane approaches all of the future DC waves. Read more

Date:Reviewed in the United States on January 21, 2020

Review:This figure gets an 11 for the way it looks but like a 6 for its pose-ability. First the way it looks, I have never had a more beautiful looking Superman toy. The amount of textures and detail in the sculpting is amazing. It almost feels like Superman is wearing MJolnir armor from Halo as it has these platinum colored blue and red armored parts over some kind of composite looking black. The wings are an added bonus to his look. Be careful with the wings as they are not round pegs on round holes and need to be placed a certain way. They extend and rotate giving the impression of a cape. This figure is loosely based on the armor Superman wore in the new 52 limited series Superman Unchained but in my opinion this figure adds more color to it and improves on it. It looks like a Superman mecha suit. But in a good way. Then there's the problems. The figure is heavy like most in this line and he suffers for it. It comes with a stand too small to hold him well without posing the other leg in a certain way. My figure does not stand straight like the one pictured here. It almost feels like a slight design flaw on mine made the right leg just slightly longer than the left. Don't know if it was done on purpose because of the stand. That said, the figure still looks great once you figure out how to pose it. There is no double jointed elbow or swivel arm. But he doesn't need this as this is more of a collectors item than a toy as a well as larger figure more fit to fight Darkseid or the Hulk in a brawl than to hold guns or weapons. Overall a fantastic looking figure that will stand out on any toy collectors shelves. Read more

Review:This batman figure is just absolutely amazing it doesn't matter if you've collected batman figures all your life or you're just starting your batman collection this figure needs to be in your collection it has a great look a fantastic paint job and stands great on the stand it comes with if i have only one minor complaint i just wish the stand he stands on had two spikes for his feet instead of just one since he has two holes under his feet he also comes with a great set of bat wings that you can put in his back very easily just be careful when you do because the wings are made of plastic and if you put heavy strain on them they might snap or completely break also this is not a toy it's for kids to collectors ages 12+ who take care of their figures in their collection the reason i say it isn't a toy is because batman has spikes on his shoulders and hands and he has pointy ears on his helmet/mask and his feet have some sharp points as well so, if you have a batman fan in your family who's 12+ get them this figure if they are under 12+ i wouldn't buy this for them since most little ones get made and throw things such as their figures when they are mad or don't get their way. Read more

Date:Reviewed in the United States on February 2, 2020

Review:I got Batman and Superman Multiverse figures and they are so unique and different then all the usual figures. Since they are done by McFarlane, they are highly detalied and they make beautiful figures. I would recommend these to any fans that want to add it to their collection, since it's so different. Great buy. Read more

Review:The Spawn comic and action figures were released whilst I was an undergraduate, and a few years later I started collecting McFarlane’s ‘Movie Maniacs’ beginning with Edward Scissorhands. The new DC Multiverse line has captured my imagination. So, lockdown’s respawned a toy addiction. Read more

Date:Reviewed in the United Kingdom on September 6, 2020

Review:I am paying for a prime service and what I get....none. NO ITEM RECEIVE!!!! Then latest update I still see is from last Thursday. Your customer service is unreachable, your app service is no working. Read more

Review:Be careful when buying myself and a friend have bought these products and pieces were missing inside the package Read more