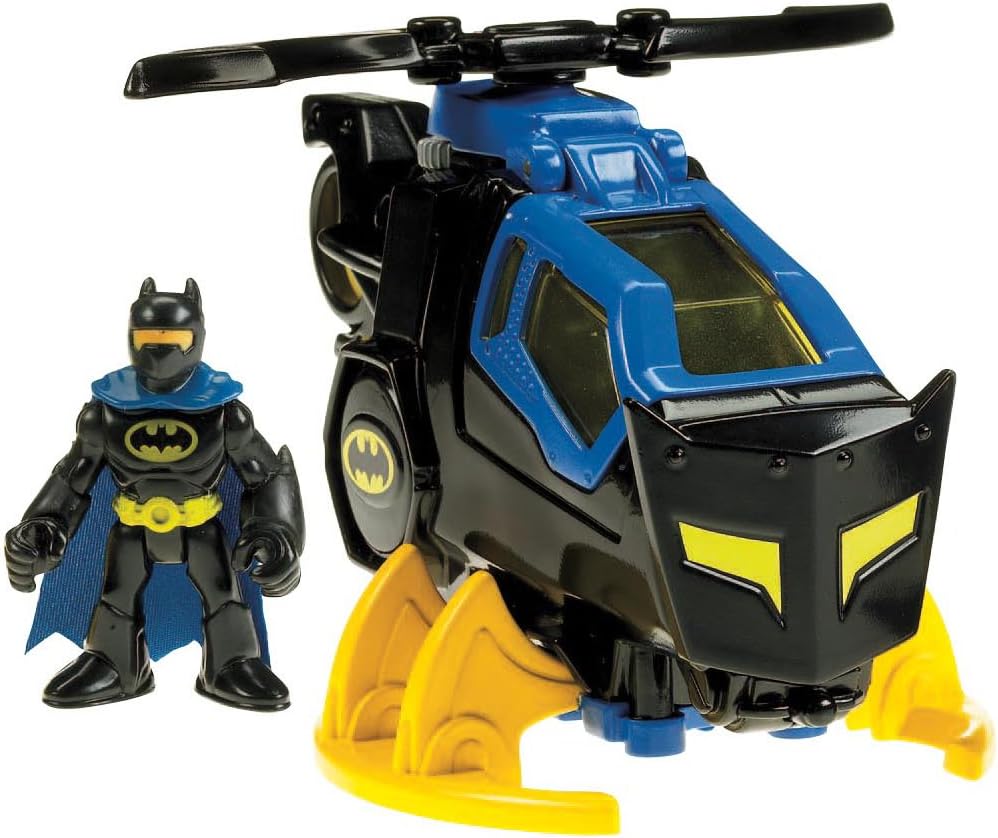 Add to whishlist
Share:
Cost Break Down
Style: Batcopter Product Description Kids can help Batman protect the skies of Gotham City with the Imaginext Batcopter! Place Batman into the cockpit, then turn the thumbwheel to make the propellers spin—and the imaginative adventure takes off! Snatch up villains by squeezing the trigger to turn the landing gear into a claw! There are all sorts of cool adventures kids can create with Batman in his Batcopter! Squeeze the trigger to turn the landing gear into a claw! Turn the thumbwheel to spin the propellers! Includes Imaginext Batman figure, and Batcopter Add to the fun with more Imaginext DC Super Friends! (Each sold separately and subject to availability.) [AGE GRADE] 3-8 YRS. From the Manufacturer Batman is needed in the city fast and the only way to get there in time is with one of Batman’s amazing rides like the Batcopter. It features rotating helicopter blades when you spin a wheel and landing gear that can grab a figure with the squeeze of a button. Batman is included and will fit inside as well. Age grading 3-8 years.
Product Dimensions
9.4 x 3.5 x 4 inches
Item Weight
10.6 ounces
ASIN
B008YTQUS0
Item model number
X7652
Manufacturer recommended age
36 months - 8 years
Is Discontinued By Manufacturer
No
Release date
April 11, 2019
Mfg Recommended age
36 months - 8 years
Manufacturer
Fisher Price

Date:Reviewed in the United States on September 23, 2017

Review:I really love this product. I bought it for my grandson and was really surprised it didn't require batteries. I also really like that the helicopter is well made in one piece and COMES with a toy figure so no need to buy additional parts! My grandson loves it! Read more

Date:Reviewed in the United States on January 5, 2020

Review:This toy has been played with a lot in the last week nd a half since Christmas and it’s holding up well to a rambunctious 2.5 yo boy. It does have an odd design flaw, the gear to move the blades on top is in a very strange and awkward position- he can’t quite figure it out and I can’t quite get my fingers in there to do it correctly either. Despite this he really loves it and I’d recommend it. Read more

Date:Reviewed in the United States on December 22, 2017

Review:The toy was smaller than I expected BUT the description does have a fairly accurate measurement. It just seems larger in the pictures. So read the description and if you realize the copter is only about 8.5 inches long, you'll be fine. Fisher Price and DC/Batman are brand names you pay a premium for, explaining the high cost of this toy. Good quality. Read more

Date:Reviewed in the United States on December 27, 2020

Review:My 4 year old and 6 year old boys received this helicopter as a gift for Christmas. It was a big hit with the kids. I purchased it for a Fisher-Price Imaginext DC Super Friends Super Surround Batcave (also found on Amazon) that has a helicopter pad on it. The helicopter is well made with sturdy and thick plastic. My two boys are rough with toys and Imaginex toys seem to hold up well with them. There is a grey wheel on the top back of the helicopter that spins the blades around. There is also a lever on the back of it that turns the helicopter legs into a trap to scoop up bad guys like the Joker. There is no assembly required and no annoying stickers to put on it. This toy does not have any lights or sound effects so it doesn’t require batteries. The toy was well packaged and shipped quickly. Didn’t have any issues with the company or shipping. Price was reasonable for the quality of the product. Read more

Review:This was a Gift for my son, he enjoys Everything that's batman. The Batman is very small, but since hes Six, its good for his age. The Helicopter is wayy bigger.the bottom of the helicopter opens and closes , which thats great. These toys are great quality and lend themselves to hours of imaginative play. Read more

Review:Nephew loved it- The cockpit opens and you can play with batman. There is a wheel in the back of the helicopter that turns the blades, and a trigger underneath to use the grabber. Just beware, there are some relatively pointy parts on the toy. Read more

Review:They are really durable and fun to play with for my kids. There is usually something unique in each Imaginext toy, and this toy is no exception. I highly recommend Imaginext toys if you have kids who are, or are approaching, the toddler years. I was able to get maybe 6 Christmas seasons fulfilled with mainly Imaginext toys for my 2 boys. Read more

Date:Reviewed in the United States on December 29, 2014

Review:I bought this for my 4 year old son and he absolutely LOVES it. It's made well and the bottom of the helicopter (the legs) opens and closes with a button that is located on the back of the helicopter. Batman fits comfortably inside the helicopter. Price is pretty good for this toy. Read more

Date:Reviewed in the United Kingdom on December 7, 2015

Review:I have no qualms with the product, it is well made by a trusted toy manufacturer and sure looks like fun to a 3 year old, however I was greatly disappointed by the size of the product, maybe i should have read more into the dimensions but it was much smaller than I had originally anticipated, and I think an asking price of nearly £37 was far too much. Read more of the product description before purchasing this! Read more

Date:Reviewed in the United Kingdom on February 2, 2019

Review:Bought as a present for my grandson. He enjoys playing with it. Read more

Review:One happy and contented grandson of 5 years old. He had all the figures except the Bat Boat and the Bat Helicopter. I bought both for his birthday this June and he was over the moon. Read more

Date:Reviewed in the United Kingdom on September 4, 2017

Review:brilliant bought for grandson but has not recieved it yyet birthday nextweek so Read more

Date:Reviewed in the United Kingdom on February 2, 2016

Review:My son absolutely loves this helicopter, although he does use a batman figure from a different play set as this one has a silver visor on and doesn't overly look like batman!! It arrived very quickly and is a great addition to his batman role play! Read more