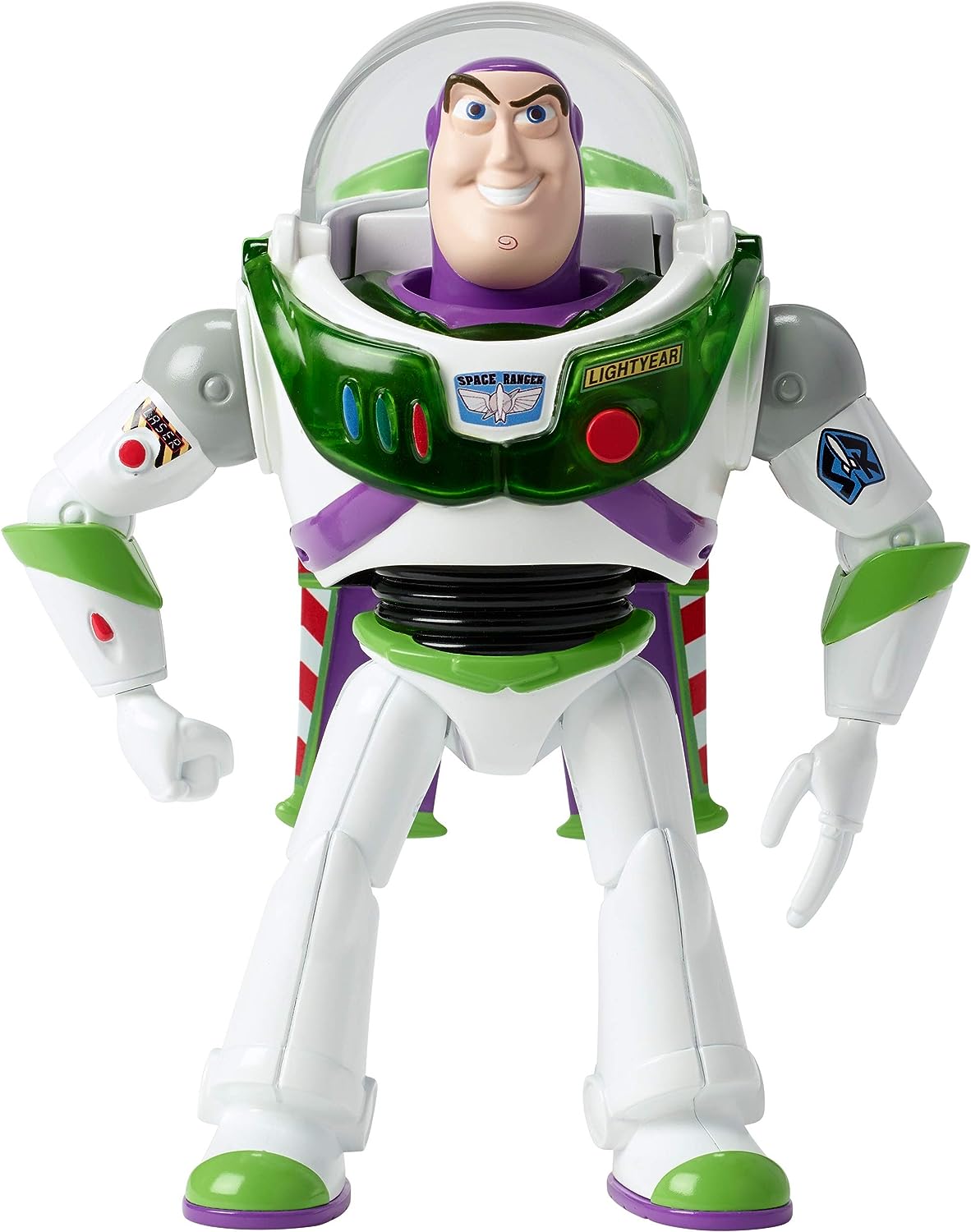 Date:Reviewed in the United States on September 26, 2019

Review:Wanted to buy my son the set of figures but found this Buzz was better than the Buzz from the set. My 3 year old son and 4 year old daughter love playing with him. You squeeze his legs and his wings pop up, he lights up, talks and right arm raises. Only thing I didn’t realize is that his helmet doesn’t come down. No biggie but I was hoping it did. Read more

Date:Reviewed in the United States on July 9, 2019

Review:Sound effects sound like he's angry..sound nothing like the original Buzz. Wings don't eject correctly they stall or not at all, helment doesn't close....doesn't do normal voice commands like Buzz, a bunch of random noises and commands very rare for a "To Infinity and Beyond" .... Read more

Review:My 4 to is head over heals about this Toy. As soon as it came in the mail he was running around the house like a crazy person with it screaming to infinity and beyond. He's happy so I am Happy. Read more

Date:Reviewed in the United States on September 3, 2019

Review:My son is finally into things and Buzz Lightyear is one of them. This toy is perfect! I love the BIG buzz, but it always seems a little over the top and obnoxious to me so when I saw that this one had most of the same features and was smaller I was thrilled. Great purchase! Read more

Review:You arrived with out any wrapping to cover it inside of a box so as it was delivered and moved around it already came with scratches. I ordered a no peep from the same seller and that one at least had a plastic bag over it. Other than the scratches I would say the toy works well lights are nice and bright. But as this is a gift I hope my nephew (who lives in Central America and will be taken to him) likes it despite the scratches on it he is still very much excited. Read more

Date:Reviewed in the United States on August 1, 2019

Review:My son was so excited I just said whatever but I wish it wasn’t damaged. The sticker was messed up on the one wing. Other than that it does what it’s supposed to and he’s enjoying it. Read more

Date:Reviewed in the United States on December 20, 2019

Review:This toy arrived with the paint chipped off on some parts, the plastic of the toy feels like it could be broken with one drop on the floor. Read more

Review:Yes the kids were excited about this arriving, and it got yanked out of the packaging faster than chocolates are unwrapped at Halloween! They have been playing with it now for a few weeks and so far its stood up, no missing or broken pieces and that's saying something, they're known to destroy all manner of toys within hours. Buzz has made more than a few flights, taken tumbles down the stairs, and crashed into everything from wayward dinosaurs to racing Hotwheels. The articulating arms and legs plus fold back wings are stronger than I thought they would be. Besides the fact that it's stood up so well it also offers a lot of repeat playability, Buzz makes an appearance at least once a day and on weekends he can be part of the focus for hours. The ways the kids have used him in their playtime is pretty amazing, this toy allows the creative juices to flow. These three items are the most important things I look for in toys, how well they stand up, how often the kids will continue to play with it, and how much creativity it inspires. Highest scores on all three! Yes, it can be a noisy thing till the batteries die but the sounds are no worse than those made by Elmo! Size-wise, while too large to fit into a lot of the cars and trucks they have the kids have decided that he should be driven wound in the back of a Tonka Truck, perfect fit. Read more

Review:Your browser does not support HTML5 video. This is a pretty amazing toy for twenty bucks, the only draw back is that he doesn't come with batteries included. He requires 3 AAA batteries to work and you need a Philip's screwdriver to open the compartment to install them. When closing the compartment, be sure to get the little clips at the bottom inside first or the wings will not auto deploy. If the back isn't installed properly, there'll be a visible gap, so you'll know. I took a little video to show you this amazing toy and it's functions because, I'm that impressed with it. He says a bunch of stuff while looking for Woody. He moves his feet by rolling and his torso turns side to side. His arms also move and he has a laser light that he controls. His wings auto deploy at his command and can be put back into place anytime. Read more