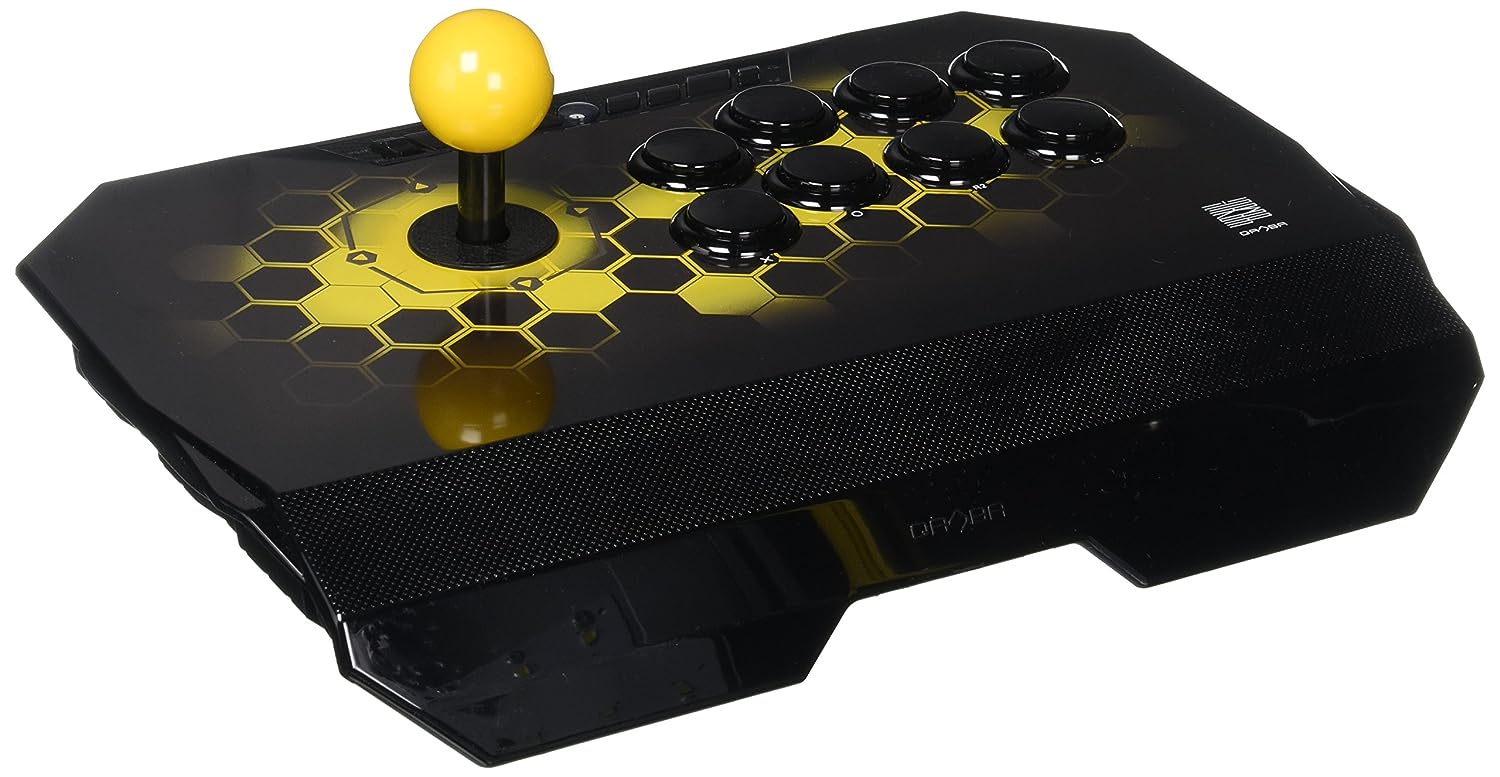 Date:Reviewed in the United States on October 17, 2017

Review:The buttons and the stick themselves are knockoffs of parts often used in Japanese arcades. The buttons themselves feel fine - they're not quite as hair-trigger sensitive as a genuine Sanwa part, but I never triggered them with a light touch anyway. I'd say the worst part of it is the joystick itself. There's no accuracy problems or issues with it double-triggering, but the "throw range" is huge. Some people have described this as it being "loose". To sum it up as easily as possible, there's a much wider range of motion in terms of moving it up / down / left / right than a genuine Sanwa stick, which can make some motions more difficult than usual. For example, super jump cancelling in a game like Marvel Vs. Capcom is made more difficult since the distance between triggering down -> up -> down is farther than a Sanwa joystick. However, you can fit a genuine Sanwa stick in here, and there are modding videos for just that all over YouTube. It's basically one step removed from a drop in replacement, no soldering or real technical know-how are required. If you wanted a PS4 compatible stick and didn't want to drop $200 or more on it, you'd do well to snag this. If you haven't already used a high end Hori stick, played on a japanese arcade unit, or touched a MadCatz TE stick back when they were plentiful and cheap, you probably won't even notice or care about the differences I'm describing. But this is well-priced, plenty functional out of the box, and for about $40~ more, you can replace the buttons and joystick with genuine Sanwa parts to end up with a world-class joystick, fit for a pro. The last thing I'll mention is, size-wise, it's almost too small to hold comfortably in my lap.If you're accustomed to using larger sticks like a MadCatz TE or one of the Hori RAP sticks that allow you to adopt a wide sitting stance, be prepared to close your legs together more than you're used to. Playing with this on a table or desk eliminates the issue entirely of course. -1 Star for the size. -1 Star for the "loose" joystick. Read more

Review:Good parts in a light plastic outer box. Excellent discount box with great buttons and a smooth, responsive stick. The design is excellent for playing in your lap or seated on the the ground and even has a space in front for the cables to sit when not in use. Great guts in a nice, cheap outer shell; it cuts the right corners for a good price. As long as you're not a salty, stick throwing maniac you should be fine. If you are, don't lose. Or buy two. Read more

Date:Reviewed in the United States on September 19, 2017

Review:A really great stick for beginners, BUT you have to rip out the stock joystick. I don't care if you have to do it with your teeth -- the joystick is way too loose. Spend about $25 (no more!) and get a Sanwa JLF stick and throw it in there. It's a super easy mod that requires no soldering, but you'll also need a 5-pin wiring harness (a few bucks at most) if you don't have one. The design is nice, and the stick itself has the right amount of weight. It's better than a lot of those smaller arcade sticks, this one looks like something you could actually take to a tournament. Don't be fooled by the cheap trash on here - you buy a $50 stick and you'll get a cheap piece of junk with awful lag. The Drone isn't perfect, but it's the best starter stick on the market. Read more

Review:This is a great arcade stick for under $60. I was looking for something that works with PS3 and PS4 without needing to have the regular controller attached to it. The Qanba Drone was the best option for the price. Once I got it I found out the square gate just wasn’t for my over aggressive American hands. I needed an octagonal one which was typically installed in most US arcades as opposed to the square used in Japanese Arcades. BUT, the stick included will not allow that modification. So, I purchased a Sanwa stick along with their octagonal gate and the 5 pin ribbon cable and, NOW, it’s awesome. Much less play and dead zones. You can swap out the buttons too but they didn’t bother me like the stick did. Read more

Review:So I should start this review off with, "I'm not really a fighting game person" That being said I think as an entry level stick, the product is fine. It holds up, to an extent Its that ground for someone who, like myself, isn't too into the fighting games but would still rather fight on joystick than controller. So, as any product should, it works as intended. I use this joystick on PC and when connecting to most games in my library, this controller isn't "mapped 100% accordingly out of the box." This applies to the "bumper and trigger buttons" So in my personal experience with this joystick, (your experience may vary obviously) first day I got this controller and put it to use, everything worked fine. I had no issues after mapping controls and the joystick was 100% responsive and no buttons were sticking in any fashion.... but that was the first day. Within the first week, the first issue I had was "ghost pressing" where me pressing L2, would sometimes press L1 instead or press them at the same time but L1 would register first. And to be fair my main issues seem to derive from the buttons. Rarely the button presses don't register at all rather than pressing something else, which is why I'm glad I'm not a competitive type when it comes to fighting games. Personal problem here - They feel / sound loud As far as the stick well as 1P / facing right, sometimes i've noticed dashing forward doesn't always register either and I don't know if I'm just tapping my controller right too fast or if I'm not doing it hard enough or what but it doesn't feel like there should be excessive force just for that. Generally works fine as 2P / facing left, at least compared to being 1P. (The other top buttons I generally never use except for when I have to maybe maneuver through menus, as Tekken 7 doesn't seem to like scrolling through menus with the analog stick, but the D-pad) My actual rating would be 3.5 stars, as I just don't feel a 4 is proper here I would love to give this controller that 4 or even a 5 like how I felt on the first day of unboxing this product, but if I'm playing and my button presses don't register, then chances are i'm pretty screwed. Overall still a nice product, but I don't see myself recommending it to anyone as of right now just in case they experience the same issues I had. Read more

Date:Reviewed in the United Kingdom on February 22, 2019

Review:The stock stick and buttons aren't as responsive as standard Sanwa parts, but if you're looking to buy this you're either okay with that or looking to modify the stick anyway. I often play with a light touch, those with more assertive motions will get on better with the stock stick. So here's the quirks for fellow modders: 1) It's a piece of cake to swap in a Sanwa JLF, but the way the stick is mounted means you can't use a Seimitsu stick and I'm not entirely sure a Hori Hayabusa would go either 2) On the one I got, the quick disconnects for the buttons were stiff on the stock buttons but extremely loose on the Hori Hayabusa buttons I fitted. If you're happy doing some wire stripping and crimping on the (long and cable-managed!) wires in question, that'll be no problem for you - the more standard Sanwa OBSF-30s may not need this either. The case is a lovely size - big enough to leave some palm rest if you fit a bat top, small enough it doesn't feel like it's eating lots of sofa or floor space. Replacing the artwork is a bit more awkward - it'd be nice if we had more sticks available at this kind of size and weight. Swapping the ball top out is actively supported, with a cut-out dial giving quick access to the bottom of the stick's shaft so you can hold it in place, unscrew the old top and screw on the new one with nothing needed but a flathead screwdriver. Read more

Date:Reviewed in the United Kingdom on January 10, 2019

Date:Reviewed in the United Kingdom on August 28, 2020

Review:Great for starting but the Qanba own brand stick and buttons feel really sloppy and cheap, but once you switch to sanwa you get a really nice travel stick due to it being really small Read more

Date:Reviewed in the United Kingdom on February 25, 2019

Review:the fighting stick does not feel too cheaply made its average but the price is not to bad Read more