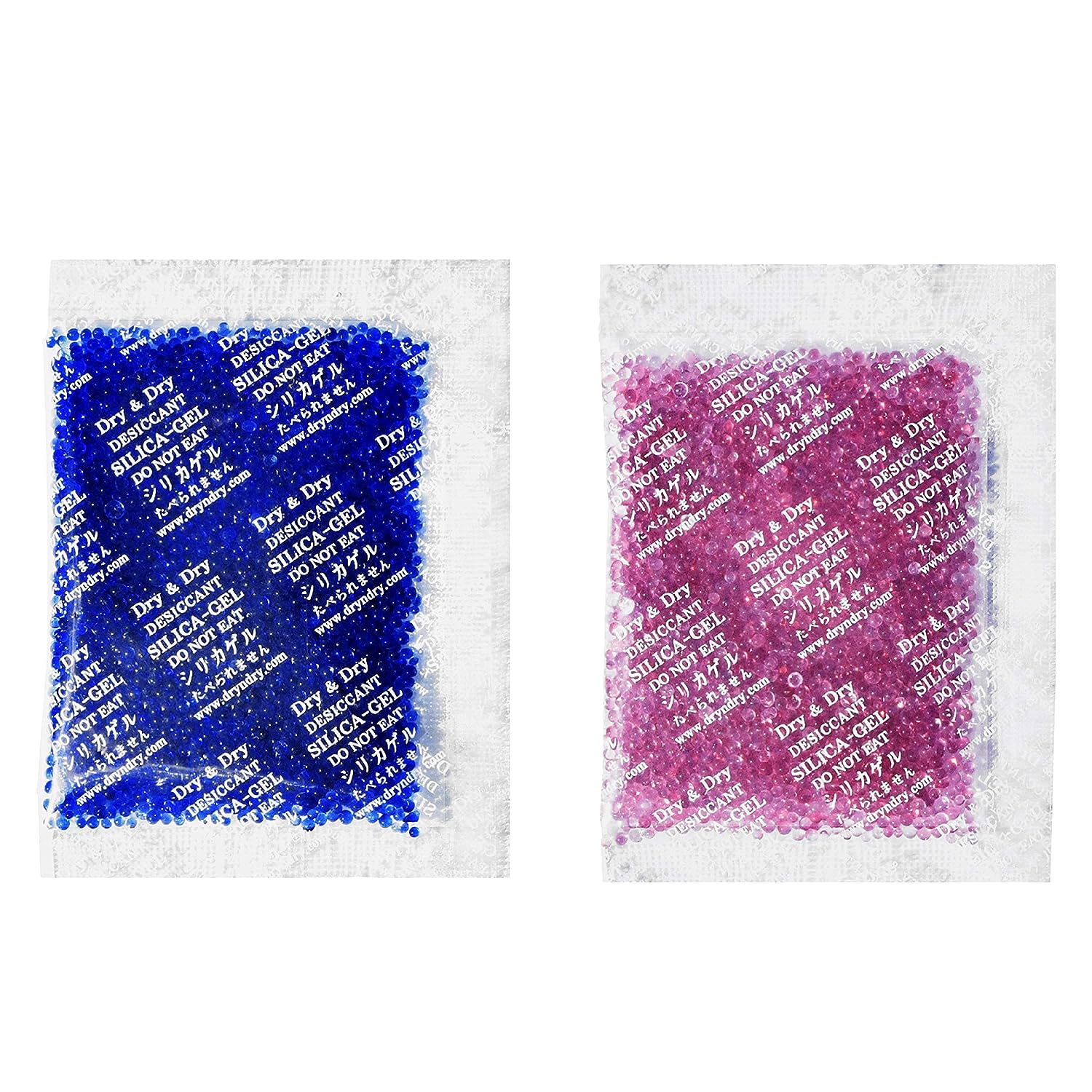 Add to whishlist
Share:
Cost Break Down
This fits your . Make sure this fits by entering your model number. P.when("ReplacementPartsBulletLoader").execute(function(module){ module.initializeDPX(); }) EASY TO READ - Clear Change from Blue(Dry) to Pink(Saturated). If you would like the packets to work faster, you can poke few more holes with a pin needle. [How To Use] Place your items and silica gel packets in a tightly sealed container to protect your items from moisture damage; Use silica gel packs to protect 3D Filaments, Safes, Guns, Ammos, Canister, Collectables, Jewelry, Documents, Camera Lens, Clothes, Cosmetics, Books, Bags, Decorations, Wet phones, Cameras, Watches, Electronics, Shoes, and Many Other Valuables REACTIVATION - Placing in the Oven for 0.5-2.0 hours at 200-250F Or Microwave for About 7-12 Minutes at DEFROST. Start with the least amount of time and increase the time if color is not fully returned to the original state or steam is visible inside the packet. Depending on beads' condition and types of microwave, they may take shorter than the recommended time. Please check the beads' color periodically. SPECIAL THICKNESS - Packets are stored in RESEALABLE Self-Standing High Quality Bag for Easy Storage and Use - Air Tight Sealing & Sturdy Bag for Moisture Control. Packet Dimension: 3"x 4". Do not use for Food and Medication.

Date:Reviewed in the United States on January 26, 2020

Review:So I had gotten these for my car originally. Ever since a replacement windshield was put on there has been tons of moisture on the inside window. Waiting for my window to dry out and stop dripping made it way to time consuming. So I originally was usually the little white silica beads found in shoe boxes and whatever else. It worked but they quickly got full. I decided to order these because I liked how they were reusable. I have had them in my car about a month and just had to recharge them in the microwave. I could tell instantly when they stopped working due to my car window. Also because they worked so well I actually puts tons in the bathroom to help soak up the moisture from showers due to a faulty fan. So far so good. Read more

Date:Reviewed in the United States on December 3, 2019

Review:What’s the use of these for long term storage if you aren’t sure when they need revitalizing? Nice amount to throw into my various tool and equipment boxes as I live in a humid environment and rust is a constant issue. These are a perfect size for a small organizer like from Dewalt or Milwaukee designed to hold smaller tools or nails, nuts and bolts and so on. Of course, one can also throw a few in a larger container. Have worked well for me so far and have “recharged” no problem. Read more

Date:Reviewed in the United States on January 29, 2020

Review:These 20 gram packs are the perfect size for my needs . I used these packets inside all my Ammo Cans for long term storage of Ammo , working great so far . I also use these packets in all of my Gun Cases . Read more

Date:Reviewed in the United States on February 1, 2020

Review:I use these for moisturizer management in my 1972 Corvette during winter storage. They work perfectly. Never had a problem with moisture buildup or mold after months of storage in a non-climate controlled situation. Definitely recommend adding these to you storage plan for classic cars. Read more

Review:I'm not sure how to gauge absorbency but I was able to renew them without difficulty which is a great plus. This product does not provide "Airtight storage" so it would be difficult to evaluate this attribute. These are pretty large compared to packets I get in commercial packaging. Next purchase might look for a smaller form factor. Read more

Date:Reviewed in the United States on March 9, 2021

Review:Put two packs at the bottom of a fire safe holding documents. After a month, both packets turned from blue to purple, not quite pink as shown in the pictures, so pack was probably not 50% saturated. Then put both packs into a toaster over set to 200F in a baking tray lined with parchment paper. After two hours, both packs returned to blue, so they do appear to be re-usable. One minor compliant - The plastic bag felt stiffer and was less clear after the first renewal cycle to turn from purple to blue. So I have some concerns about longevity of overall packaging, i.e. number of cycles the package can sustain. Read more

Review:These work great! After being out in the summer humidity with my camera I always put it in a ziplock type bag and let it sit for a few hours. These suck up all the moisture and you can actually see how well they work by the color change. I do put mine in the oven to reuse them but there's only a certain amount of times that will work before I need to buy new ones. Humidity will kill your camera and lenses but if you use these, you won't have any problems Read more